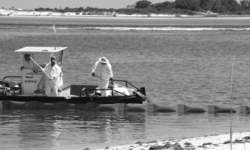 Workers clean up globs of oil on the coastline near Pensacola, Florida, after the disastrous BP oil spill in 2010.

On April 20, 2010, Deepwater Horizon, the semi-submersible exploratory offshore drilling rig in the Macondo Prospect oil field in the Gulf of Mexico, exploded and sank after two days. A partially capped oil well one mile below the surface of the water began releasing 35,000 to 60,000 barrels per day into the Gulf, eventually contaminating the coasts of Louisiana, Mississippi, Alabama, Texas, and Florida.

Of the 126 crew members on board the rig at the time of the explosion, 79 were employees of Transocean Ltd., seven of British Petroleum, and the rest of various companies, including Anadarko, Halliburton, and M-I Swaco. Eleven of the crew were killed as a result of the blowout. The U.S. government named British Petroleum (BP) as the responsible party and held the company liable for all clean-up costs and other damages. Deep-sea robots were unable to stop the approximately 60,000 barrels of oil from gushing into the Gulf until July 15, 2010.

BP is a global oil and gas company headquartered in London, England. It is ranked as one of the six “supermajor” oil and gas companies and is the third-largest energy company and fourth-largest company in the world, as measured by revenues. BP has operations in over eighty countries, produces approximately 3.8 million barrels of oil a day, and franchises 22,400 service stations around the world. The largest division of BP is in the United States.

Although British Petroleum assumed responsibility for the clean-up at an estimated $7 million a day, established a $20 billion spill response fund, and willingly dealt with individual lawsuits, all of which cut into its profit margin, some conspiracy theorists argued that BP had destroyed the rig in the Macondo Prospect oil field itself in order to profit from higher gas prices.

Other conspiracists argued that BP and the citizens of the Gulf Coast region were the victims of such insidious plots as: