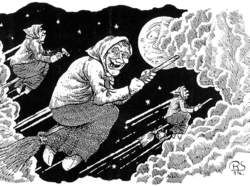 Early brooms were made from the stalk of the Scotch Broom plant (cytisus sco- parius) with twigs and/or leaves tied about one end. Besom (pronounced bi-s'm or bee-s'm) was originally a common name for any sweeping implement. It was a bundle of rods or twigs of broom, heather, or birch. The name besom became interchangeable with broom.

Brooms became a symbol of womanhood and of female domesticity. In medieval times, when a woman was away from her home she would leave her broomstick standing against the door of her house, as a sign that she was not at home. Alternatively, in a small cottage she might stick the broom up the flue so that it stuck out the chimney. This led to later assertions that witches flew their broomsticks out through the chimney when leaving for the sabbat. This form of egress was first mentioned by Petrus Mamor in Flagellum Maleficorum (1460).

The popular idea of Witches flying through the air on a broomstick, pitchfork, pole, shovel, or any of a variety of animals, was known as transvection. The earliest depiction of it is Ulrich Molitor's engraving in De Lamiis (1489). He shows three Witches, each with an animal's head, astride a long, forked branch. The earliest confession to it was in 1453, when Guillaume Edelin, Prior of St. Germain-en-Laye near Paris, claimed he had so traveled. Martin Tulouf, of Guernsey, said in 1563 that he saw his mother fly up the chimney on a broomstick, crying "Go, in the name of the devil and Lucifer, over rocks and thorns."

One of the old forms of sympathetic magic, designed to promote fertility of the crops, was for the country folk, the pagans, to go to the fields with their broomsticks, pitchforks and poles. Straddling them like hobby-horses, they would dance around the fields, leaping in the air as they danced. The belief was that the higher they jumped, the higher the crops would grow. This practice may well have sparked the idea of them riding such instruments through the air. Certainly such a distortion made good anti-pagan propaganda for the early Church, which claimed that it was the work of the devil.

Many inquisitors did not believe that witches could really fly through the air on broomsticks. But since the witches they questioned seemed to believe that they did, then the evidence was duly recorded and presented as proof of dealings with the devil.

Broomstick weddings were popular in Wales and elsewhere for many generations. A broomstick would be laid across the threshold of the couple's new home and they would both jump over it, holding hands, as their first entry into the house. If the couple later decided to part, then they could jump backward over the broom to legally annul the wedding. This had to be done within one year of the original leap and both leaps had to be made in front of witnesses. In some Romany (Gypsy) weddings the couple will similarly jump over a broomstick, or bundle of broom, as part of the wedding ceremony.

Dame Alice Kyteler, an Irish Witch, claimed that she made frequent journeys by broomstick. As her accusers put it, she "ambled through thick and thin, when and in what manner she listed." She didn't actually claim to fly through the air on it, but her accusers didn't hesitate to read that into it.

In some areas it is considered bad luck to step over a broom handle and extreme bad luck to drop a broom so that it falls flat on the floor. If an unmarried girl steps over a broom, it is taken as a sign that she will have a child out of wedlock. A broom should never be carried over water, and an old broom should not be taken into a new house.

In modern day Wicca, the broomstick is recognized for its associations with the Old Religion, whether factual or not. Many Witches, both covens and Solitaries, use a broom in their rituals. Some use it to mark, or sweep, the Circle in which the rites take place. Some use it as a sword that might be used by other Witches. Many use it to re-enact the old fertility rites of dancing round the fields. Many use it in their handfasting ceremonies, in much the same way that the Welsh and the Gypsies use it.

In Chinese folk belief, the Goddess of Fine Weather is called the "Broom Goddess" or Sao Ch'ing Niang, "the girl who sweeps the weather clear." Little girls will cut out paper dolls representing her, during great rains, and will hang them near the gate.

Feedback
Flashcards & Bookmarks ?
Please log in or register to use Flashcards and Bookmarks. You can also log in with
Flashcards ?
My bookmarks ?
+ Add current page to bookmarks
Mentioned in ?
References in periodicals archive ?
Then there's Flodden Field, Holy Isle, Bamburgh Castle, Berwick Barracks and broomstick training.
Kings of Castle; History and adventure galore on a four-day family trip across the Border
Trunk Rotation Place a broomstick or towel across the back of your shoulders and grip it with both hands.
Fitness for all; Follow Jamie's exercise tips in the final part of our great four-week programme to improve your fitness
Sion Bebb pledged to return home on Monday and acquire a long-handled broomstick putter to cure a weakness he feels is holding back his career as a tournament pro Bebb, a PGA Cup player and former British Club pro champion was furious with himself and disappointed that Wales go into the third and final round this morning some nine strokes adrift of leaders Spain and five behind second placed Scotland.
Hope fades in Costa del Sol; GOLF
The children enjoyed learning how to "ride a broomstick", read tea leaves, recite magic spells and read a crystal ball - among other things!
It's wizard!
Me, I'm afraid I'm going to have to get myself a cat and go back to my broomstick.
Wizard four-wheel drive is so chunky, funky and fun
There's also a Hogwart's Blazer case and a gift set including cover and hands-free kit - useful for when you're out on the broomstick.
Harry Potter must have
Online bookseller Amazon had posted the title by yesterday evening and had a copy of the sleeve which shows teenage wizard Potter flying on a broomstick and dodging the fiery breath of a dragon.
Post Script
It's like trying to balance a watermelon on a broomstick.
Worship by the sweat of your brow
"Loner" Iftikhar Hussain also chanted obscenities at all hours of the day and night - after being hit with an ASBO for battering another householder with a broomstick.
Loner drove neighbours mad cursing and clapping
The students were also in awe of every display that was available, especially the green screen broomstick experience where you could actually ride one of the broomsticks that were used in the films.
Studio tour casts a spell on pupils; Schoollife
A STUDENT is preparing to climb atop his broomstick to compete at an international quidditch tournament in Canada.
Student bids for quidditch glory
The story features a witch and her cat who are flying happily through the air on a broomstick when a gust of wind snatches away her hat and wand.
CULTURE CHOICE