Brownian movement or motion, zigzag, irregular motion exhibited by minute particles of matter when suspended in a fluid. The effect has been observed in all types of colloidal suspensions (see colloid)—solid-in-liquid, liquid-in-liquid, gas-in-liquid, solid-in-gas, and liquid-in-gas. It is named for the botanist Robert Brown who observed (1827) the movement of plant spores floating in water. The effect, being independent of all external factors, is ascribed to the thermal motion of the molecules of the fluid. These molecules are in constant irregular motion with a velocity proportional to the square root of the temperature. Small particles of matter suspended in the fluid are buffeted about by the molecules of the fluid. Brownian motion is observed for particles about 0.001 mm in diameter; these are small enough to share in the thermal motion, yet large enough to be seen with a microscope or ultramicroscope. The first satisfactory theoretical treatment of Brownian motion was made by Albert Einstein in 1905. Jean Perrin made a quantitative experimental study of the dependence of Brownian motion on temperature and particle size that provided verification for Einstein's mathematical formulation. Perrin's work is regarded as one of the most direct verifications of the kinetic-molecular theory of gases.
The Columbia Electronic Encyclopedia™ Copyright © 2022, Columbia University Press. Licensed from Columbia University Press. All rights reserved.

In principle, this motion exists for any foreign body suspended in gases, liquids, or solids. To observe it, one needs first of all a macroscopically visible body; however, the mass of the body cannot be too large. For a large mass, the velocity becomes small. See Kinetic theory of matter

the disorderly motion of small particles (dimensions of several microns or less) suspended in a liquid or gas; takes place under the influence of collisions of molecules of the surrounding medium. It was discovered by R. Brown in 1827. The suspended particles, visible only under a microscope, move independently of each other and describe complex zigzag trajectories. Brownian movement does not diminish with time and does not depend on the chemical properties of the medium. The intensity of Brownian movement increases with the temperature of the medium and with the reduction of its viscosity and the particle size.

A systematic explanation of Brownian movement was given by A. Einstein and M. Smoluchowski in 1905-06 on the basis of kinetic molecular theory. According to this theory, the molecules of a liquid or gas exist in constant thermal movement, and the momenta of various molecules do not have the same magnitude and direction. If the surface of a particle placed in such a medium is small, as is the case for a Brownian particle, then the impacts experienced by the particles—caused by the surrounding molecules—will not be exactly compensated. Consequently, as a result of this “bombardment” by molecules, the Brownian particle falls into disorderly motion, changing the magnitude and direction of its velocity approximately 1014 times per second.

In observation of Brownian movement (see Figure 1), the position of a particle is recorded after equal time intervals. Of course, between observations the particle moves non-rectilinearly, but the connection of the successive positions by straight lines yields an arbitrary picture of the motion.

The principles of Brownian movement serve as graphic confirmation of the fundamental hypotheses of kinetic molecular theory. The general picture of Brownian movement is described by Einstein’s law for the mean square displacement of the particle Δx2 in any direction x. If within the time between two measurements a sufficiently large 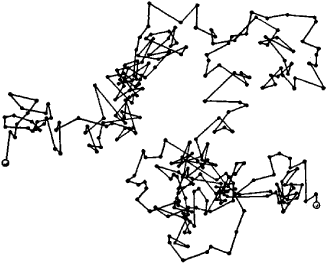 Figure 1. Brownian movement of a particle of gamboge in water. The points indicate the successive positions of the particle over 30-second intervals. The observations were performed by J. Perrin under a microscope at a magnification of approximately 3,000.

number of collisions of the particle with molecules takes place, then Δx2 is proportional to this time τ:

Here D is the diffusion coefficient, which is determined by the resistance exerted by any medium in which the particle moves. For a specific particle of radius a, it is equal to

where k is the Boltzmann constant, T is the absolute temperature, and η is the dynamic viscosity of the medium.

The theory of Brownian movement explains the random motion of a particle under the influence of random forces caused by molecules and frictional forces. The random character of the force implies that its action during the time interval τ1 is completely independent of the action during the time interval τ2, unless these intervals overlap. The average force, after a sufficiently large period of time, is equal to zero, and the average displacement Δx of a Brownian particle is also found to be zero.

The conclusions of the theory of Brownian movement agree brilliantly with experiments. Formulas (1) and (2) were corroborated by the measurements of J. Perrin and T. Svedberg (1906). On the basis of these relations, the Boltzmann constant and Avogadro’s number were experimentally determined to be in accordance with their values obtained by other methods.

The theory of Brownian movement has played an important role in the justification of statistical mechanics; it is of practical significance as well. Above all, Brownian movement limits the accuracy of measuring instruments—for example, the limit of accuracy of the readings of a mirror galvanometer is determined by the chatter of the mirror, which is similar to that of a Brownian particle being bombarded by air molecules; the laws of Brownian movement determine the random movement of electrons, which causes the noise in electric circuits; the dielectric losses in dielectrics are explained by the random motions of the molecule-dipoles that make up the dielectric; and the random motion of ions in solutions of electrolytes increases their electrical resistance.

Feedback
Flashcards & Bookmarks ?
Please log in or register to use Flashcards and Bookmarks. You can also log in with
Flashcards ?
My bookmarks ?
+ Add current page to bookmarks
Mentioned in ?
References in periodicals archive ?
The mobility motion of particles floating on the liquid surface is known as Brownian motion and these particles form an ad hoc network just like the mobile nodes.
An improved directional broadcast algorithm based on Brownian motion
Also, the values of -[theta]'(0) and -[phi]' (0) are depicted against Brownian motion parameter Nb and thermophoresis parameter Nt for various M in Figures 9 and 10.
Magnetohydrodynamic boundary layer flow of nanofluid over an exponentially stretching permeable sheet
Nieto de Castro, "Predicting the thermal conductivity of nanofluids--effect of Brownian motion of nanoparticles," Journal of Nanofluids, vol.
Physical-statistical model of thermal conductivity of nanofluids
As opposed to this occurrence, the thermal boundary layer becomes thinner as the Brownian motion parameter increases.
Three-dimensional flow and heat transfer past a permeable exponentially stretching/shrinking sheet in a nanofluid
Modeling of the Brownian motion via CFD requires geometry specification through identifying the computational grid, numerical solution strategy, and specification conditions.
CFD study on wall/nanoparticle interaction in nanofluids convective heat transfer
An interesting feature that can be observed in Figure 5 is that with lower Lewis number and Brownian motion, -[phi]'(0) is negative; that is, reverse concentration rate occurs.
Stagnation point flow of a nanofluid toward an exponentially stretching sheet with nonuniform heat generation/absorption
[W.sub.t] is said to follow the Geometric Brownian motion.
Shiryaev-Zhou index--a noble approach to benchmarking and analysis of real estate stocks
As discussed in [7], there are a number of applications of Brownian motion. As discussed in [3], the use of time scales allows considerations of time domains more complex than R and N.
Brownian motion on time scales
A useful linear approximation to the upper bound (dominant Brownian motion) has been proposed, [[[eta]].sub.0] [approximately equal to] 1.45 + 0.672 x R, and a recently proposed formula has been used to determine an average aspect ratio from a comparison of sedimentation and laser diffraction sizing data.
Influence of particle shape on the viscosity of kaolin suspensions
The cytoplasmic granules exhibit constant, Brownian motion, due to swelling of the neutrophil--a result of hypotonicity.
Urine wet prep glitter cell reporting