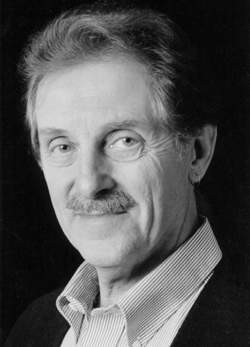 Born in London, England, on August 31, 1934, Buckland moved to Nottingham at the age of five and remained there during the war, returning to the London area in 1951. His father Stan, a full-blood Romany (Gypsy), was a Higher Executive Officer in the Ministry of Health. Stan was also a freelance writer of short stories, plays, and music who encouraged his son to write. At the age of twelve Raymond was introduced to spiritualism by his paternal uncle, George. This was the start of Buckland's interest in all matters of the occult. He read voraciously. In the 1950s, with friends, he researched spiritualism and first read Margaret Murray's book God of the Witches. Although raised nominally in the Church of England, his religious interest quickly focused on Wicca. He was educated at Kings College School, Wimbledon. From there he took a job as an engineering draftsman. He married Rosemary Moss in 1955, and spent two years in the Royal Air Force (1957-1959). He then worked as retail manager for a publishing company in London. Throughout the war years, and for some years after, Buckland was heavily involved in the theater, both amateur and professional, appearing regularly at the People's Theater, Nottingham, and the Nottingham Repertory Theater.

Reading Gerald Gardner's book Witchcraft Today, and re-reading Murray's book, in the late 1950s Buckland realized that, without consciously doing so, he had been searching for just such a religion as Wicca. He began a correspondence with Gardner and, later, with Gardner's High Priestess, Monique Wilson (Lady Olwen). He later became Gardner's spokesman in the United States, having emigrated there in February, 1962.

At the end of 1963, on a trip to Perth, Scotland, Buckland was finally initiated

into the Craft by Olwen. This was his first actual meeting with Gardner, just before the "Grand Old Man of Witchcraft" left for the winter for what was to be his last visit to Lebanon.

There was great interest in Witchcraft in America in the early 1960s, and Raymond and Rosemary were not short of coven candidates. But, as taught, they were cautious and did not initiate anyone without due process. Such was the demand for Wicca entry at that time that they received a great deal of criticism for this caution. But even today Buckland feels that he did the right thing, pointing to many problems he has seen as a result of indiscriminate initiations.

However, many people, impatient and without coven contacts, decided to start their own covens without proper training or initiation, resulting in a number of pseudo-Wiccan groups based solely on misinformation gleaned from such sources as Ira Levin's Rosemary's Baby, ceremonial magic, and other nontraditional sources.

Buckland dedicated himself to correcting popular misconceptions about Witchcraft through the press, radio, and television, but he tried to do so anonymously. This anonymity was violated by Lisa Hoffman, a journalist with the New York Sunday News, which resulted in his name being published. This led to a great deal of persecution of himself, his wife, and their two children. However, Buckland continued his self-appointed task of correcting the misconceptions. Gardner's books had, by this time, gone out of print, so Buckland wrote Witchcraft From the Inside (Llewellyn, 1971) to fill the gap. This was to be the first of many such books.

Buckland found that his life paralleled Gardner's in many ways. One way was the building of a collection of artifacts which grew into a museum. Gardner had a Museum of Magic and Witchcraft on the Isle of Man (see Gerald Gardner), the first of its kind in the world. Buckland's collection became the first of its kind in the United States, formally opening in 1968. Originally this was housed in the basement of his Long Island home and was open by appointment only, but it was later (1973) moved into an old Victorian house in Bay Shore. There it was reviewed in many major newspapers and periodicals and was the subject of a television documentary. Artifacts from the collection were loaned for a special exhibit to the Metropolitan Museum of Art and to the New York Museum of Folk Art.

Meanwhile, other covens eventually hived off from the original New York coven, slowly spreading the Gardnerian branch of the Craft throughout the United States. Gradually other traditions began to appear, joining with the various spurious ones to establish the Craft as a viable alternative religion in America.

Buckland's writing continued. In 1969, just prior to his Witchcraft book, A Pocket Guide to the Supernatural was published by Ace Books. This was followed by Practical Candleburning (Llewellyn, 1970), Witchcraft Ancient and Modern (HC, 1970), and many more. Today Buckland has written an average of one book a year since 1969.

Buckland's marriage ended in 1973, and the operation of the New York coven was turned over to another couple. In 1974, shortly after he moved to New Hampshire, Buckland married Joan Taylor. The museum was established in a new building in Weirs Beach, and he continued with his writing. In 1978 he moved to Virginia Beach, the museum went into storage, and Buckland became Educational Director for the Poseidia Institute.

While in New Hampshire, Buckland finally admitted to himself that he was not totally happy with the Gardnerian form of Wicca. It no longer met his religious needs and he was dismayed by the blatant ego trips and power plays displayed by many of its later practitioners. After much thought and research, he founded the Seax-Wica, based on a Saxon background. It was more democratically organized than the Gardnerian Degree System tradition. Although originally written for his own personal use, he found there was a great deal of interest in it and was persuaded to publish the rituals in The Tree: Complete Book of Saxon Witchcraft (Weiser, 1974). Some writers later suggested that the tradition was written as a joke, but Buckland insists this is far from the truth, since it is a form of the religion to which he felt very strongly drawn.

By the early 1980s Buckland and his wife found their interests going in different directions and divorced. In 1983 he married his third, and present, wife Tara Cochran. They lived for two years in Charlottesville, Virginia, before moving to San Diego, in southern California. While in Virginia, they founded the SeaxWica Seminary and published the Seax-Wica Voys, a Wiccan magazine. The seminary, as a correspondence school, grew to over 1,000 students worldwide. Eventually, however, Buckland found it took too much of his precious writing time and terminated it.

In San Diego, before turning to writing full time, Buckland worked for a few years for a theatrical and film casting company. He became very close friends with the actor John Carradine, working with him for the last few years of the actor's life. Over the years Buckland also worked with Orson Welles (as Technical Consultant for Necromancy), William Friedkin, and other movie actors and directors. He also played character parts, appearing as a crazy psychiatrist in the cult movie Mutants in Paradise. While in San Diego, Buckland made the video Witchcraft Yes-

terday and Today. He also became good friends with Scott Cunningham, a fellow author and Wiccan.

The Bucklands finally decided that they had had enough of coven Witchcraft and became Solitaries. In search of a house and some land, they moved to Ohio (Tara's home state) in 1992 and bought a small farm. From there Buckland continues his writing, which now takes the form of fiction as well as nonfiction. His many interests include flying ultralight aircraft and building unusual automobiles.

Some of Buckland's best-selling books, from more than thirty written to date, are Buckland's Complete Book of Witchcraft (1986), Scottish Witchcraft (1991), Doors to Other Worlds (1993), Advanced Candle Magic (1996), Gypsy Witchcraft and Magic (1998), and his two novels The Committee (1993) and Cardinal's Sin (1996), all published by Llewellyn Publications.