Buddha, Relics of the 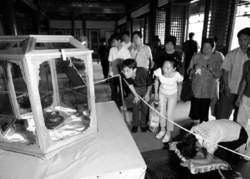 Relics such as the Sarira at Tanzhe temple, which includes remains of the Sakyamuni Buddha, are important in Buddhism, just as they are in Catholicism and some other beliefs. AFP/Getty Images.

Buddha, Relics of the

Gautama Buddha, the founder of Buddhism, died around 480 BCE at Kusinagara, a town in the northeast corner of Uttar Pradesh, India, near the border of Nepal. Various Buddhist scriptures tell the stories of his death and the events immediately following.

According to the story, the Buddha’s body was cremated. In the ashes were found a number of relics, including teeth and bones. Many of Buddha’s followers of royal status expressed their desire to have the relics, and a Brahmin priest named Drona emerged to divide them equally. His initial decision was to create eight sets, one for each ruler desirous of having them. However, Drona was discovered to have hidden some relics, which were stolen.

By this process, the relics were distributed to eight cities in various parts of India, and those stolen to a ninth. Drona retained the vase that had previously held the relics. At each site to which the relics were dispersed, astupa was built to hold them. Drona also built a stupa to hold the vase. A century later, King Asoka conquered all the lands where the relics had been sent, regathered the relics, and redistributed them to a variety of places throughout southern Asia, from Sri Lanka to China.

Buddhism, like Christianity, does not consider relics an essential part of its practice. Nonetheless, they do serve to humanize the often austere faith and provide a local focus for a faith that originated in a distant land many centuries ago. Relics have been seen as signs of the Enlightened One’s constant presence. Also, like the Christian relics associated with Jesus (the True Cross, Veronica’s Veil, THE Shroud of Turin, etc.), there are usually significant gaps in the historical record tying those items presently claimed to be genuine relicsof the Buddha to the events reputed to have occurred immediately following his death.

Places where some of the more important relics may be seen at Buddhist shrines worldwide include the following:

At Anuradhapura in Sri Lanka, the stupa Thuparama Dagaba houses what is said to be the Buddha’s alms bowl and his right collarbone. In Kandy, at the center of the island nation, one may see the Buddha’s tooth, now housed in a golden stupa known as Malagawa Vihara (or Dalada Maligawa).

In Myanmar, several strands of hair are to be found at the Shwedagon Pagoda in Ranyon. A tooth recovered from a collapsed pagoda in Mrauk-U, Myanmar, has been sent to the Golden Pagoda Buddhist Temple in Singapore.

China is home to two of the most famous relics of the Buddha. In Beijing, Ling Guang Si Monastery is home to one of the Buddha’s teeth. The medieval capital, Xian, had been the home to the Buddha’s finger bone, housed in Fa Men Si Monastery. That relic was lost, however, in the changes that occurred in China, including the rise and fall of various forms of Buddhism and then the rise of a secular government in the twentieth century. But in the 1980s, during archeological exploration in Xian, the subterranean crypt where the finger had been housed was rediscovered.

In 1994 the Kingdom of Thailand initiated a project at Kushinagar in northern India, where Buddha died, as part of a larger movement to reestablish Buddhism in the land of its origin. One part of the impressive monastic complex is the Maha Chetiya, a shrine designed by the Thai King Bhumibhol Adulyadej. Here Buddha’s relics formerly kept in Thailand have been placed.

In 2005 and 2006, Lama Zopa Rinpoche, the spiritual leader of the Foundation for the Preservation of the Mahayana Tradition, an international Tibetan Buddhist organization based in Taos, New Mexico, organized a tour (including several stops in the United States) of a number set of Buddhist relics, including those of the Buddha. Some of these relics had been salvaged from statues in Tibet, where they had been enshrined for thousands of years before the Chinese occupation in 1951. With the Dalai Lama’s urging, museums and monasteries that owned them donated the relics for the benefit of the Maitreya Project, an ambitious plan to build what would become the world’s largest statue—a 500-foot-high bronze representation of a Maitreya Buddha in northern India. The statue would sit on a 17-story building designed as a throne that would include a prayer hall designed to accommodate 4,000 people.