stupa (sto͞oˈpə) [Sanskrit,=mound], Buddhist monument in tumulus, or mound, form, often containing relics. The words tope and dagoba are synonymous, though the latter properly refers only to a Sinhalese Buddhist stupa. The stupa is probably derived from a pre-Buddhist burial mound. The oldest known prototypes (c.700 B.C.) are the enormous mounds of earth at Lauriya Nandangarh in NE India, which were the burial places of royalty. The wooden masts embedded in the center of these mounds probably carried the umbrellas that served as a symbol of royalty and authority; early Buddhists appropriated not only the royal symbol of the stupa but also used the umbrella as a symbol for the Buddha. The Emperor Aśoka was the first to encourage the building of stupas. The earliest mound forms that can properly be termed stupas, those at Sanchi and Bharhut (see Indian art and architecture), are hemispherical masses of earth raised on a base and faced with brick or stone. The structure is surrounded by a processional path, the whole being enclosed by a stone railing and topped by a balcony. Though in its development the stupa often became elaborate and complex, in its purest form the plan consisted of a circle within a square. Many of the most significant monuments of the Buddhist world are stupas, and they can be found in every country in which Buddhism has been practiced. Some examples are the Thuparama dagoba (244 B.C.) in Sri Lanka, Borobudur in Java (8th or 9th cent. A.D.), and the Mingalazedi stupa in Myanmar (A.D. 1274). In East Asian Buddhist architecture, the function of the stupa has been taken over by the pagoda.

A Buddhist memorial site, consisting of an artificial mound on a platform, surrounded by an outer ambulatory with four gateways, and crowned by a multiple sunshade, erected to enshrine a relic.
Illustrated Dictionary of Architecture Copyright © 2012, 2002, 1998 by The McGraw-Hill Companies, Inc. All rights reserved 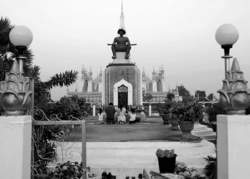 Stupas such as the famous Pha That Luang (or Pha Chedi Lokajulamani) in Laos, contain relics of buddhas and serve as important holy sites in Buddhist cultures. AFP/Getty Images.

In Buddhist culture, a stupa (in Tibetan, a chorten) is a shrine to the dead. Their origins can be traced to prehistoric times, when they were simple mounds where important people were buried. As Gautama Buddha (the founding figure in Buddhism) approached the end of his earthly life, he requested that his remains (cremation being the common mode of disposing of bodies at the time) be placed in a stupa. At the same time, herequested that people change their thinking about stupas. Rather than being merely a place to remember the dead, a stupa should be seen as a symbol of the enlightened mind. From that time on, the stupa evolved into its present complexity. Traditionally, the stupa is a hemisphere topped with a square shape. Above the square is an umbrella-shaped cone with a pointed top.

The stupa represents the body of a buddha (an enlightened individual, but not necessarily Gautama Buddha) and should call to mind the buddha’s presence in physical form. The base represents his throne; the four steps symbolize his legs crossed in the lotus position; the dome signifies his torso, with the square specifically standing for his eyes (and in some cultures they have eyes drawn on them); and the spire is his crown. Contemplating stupas over the years has allowed for the development of a rather elaborate correspondence between different parts of the stupa and Buddhist teachings.

Within it, every stupa contains a life tree and holy relics. The central pillar in the midst of the stupa corresponds with the world tree, which in Indian mythology united heaven and earth. As the stupa evolved, the monument became a pivotal place, an axis around which believers moved like the planets traveling through the universe. It is also likened to the human spinal cord.

The relics placed inside a stupa may be as simple as a few bones that survive a cremation or items that belonged to the person, or as elaborateas the mummified body of an especially important person. (The earliest Buddhist stupas were built to house relics of Gautama Buddha.) For example, the mummified remains of many of the Dalai Lamas were placed within stupas that rest inside the Potala, in Llasa, Tibet. Also inside the stupa one might place copies of Buddhist scriptures, prayers or mantras, statues of Buddha, or clay tablets called tsha-tsha, which have various symbols on them.

Stupas are widespread throughout southern Asia. In Sri Lanka they are known as dagobas. In China and Japan, they evolved into the pagoda. The largest stupa in the world is Borobudur, an Indonesian temple complex near Yogyakarta, Java, that incorporates many small stupas surrounding a large main stupa at the temple’s highest point.

Stupas reached the epitome of their development in Tibet, and in the last generation the scattered Tibetan community has erected stupas around the world. In the West, the construction and dedication of a stupa has often become a significant event in the development of a Buddhist center, signifying its having attained a certain level of stability. Such stupas may be erected upon the death of a movement’s founder (and hence contain his or her relics); however, they may be constructed in a more general context and contain relics related to famous Buddhists contributed by older centers. A believer generally shows respect when visiting a stupa/chorten by walking around it clockwise so that the right arm is closest to it.

in Buddhist architecture, a large structure used as a reliquary. The earliest stupas, such as the Great Stupa at Sanchi (third and second century B.C.), already had a standardized three-part structure: a terraced foundation, a central mound, and a superstructure in the shape of a multitiered umbrella crowning the mound. Stupas may be hemispheric (India, Sri Lanka), square and terraced (Sri Lanka, Thailand), tower-shaped (Vietnam, China), bell-shaped (Burma, Thailand, Cambodia, Indonesia), or bulb-shaped (Mongolia, China).

Stupas are usually faced with stone or plastered bricks with a filler of earth or gravel; they are often painted and gilded. The term “stupa” is used only in India and Nepal; in Sri Lanka the corresponding term is dagoba, in Burma zedi and pato, in Thailand chedi and prann, in Laos that, in Mongolia suburgan, and in China and Vietnam pao t’a and pagoda. 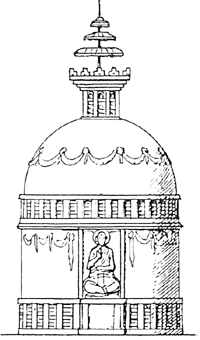 stupa topped by a chattravali
A Buddhist memorial mound, erected to enshrine a relic or to commemorate a sacred site; consists of an artificial mound, raised on a platform and surrounded by an outer ambulatory with a stone railing and four gateways, crowned by a multiple sunshade.
McGraw-Hill Dictionary of Architecture and Construction. Copyright © 2003 by McGraw-Hill Companies, Inc.

Feedback
Flashcards & Bookmarks ?
Please log in or register to use Flashcards and Bookmarks. You can also log in with
Flashcards ?
My bookmarks ?
+ Add current page to bookmarks
Mentioned in ?
References in periodicals archive ?
Two further representative titles may serve as indices of a general trend: Lama Anagarika Govinda, Psycho-cosmic Symbolism of the Buddhist Stupa (Emeryville: Dharma, 1976) and Adrian Snodgrass, The Symbolism of the Stupa (Ithaca: Southeast Asia Program, Cornell University, 1985).
Symbols, icons and stupas
The land illegally transferred is located adjacent to the encroached path to ancient Buddhist Stupa and monastery Dharmarajika which dates back to 3rd century B.C., and listed as a UNESCO's World Heritage and accredited for being one of the earliest Buddhist monuments and one of the 8 largest Buddhist stupas in South Asia.
Developer booked for transferring land on fake documents
According to Director Archaeology and Museums Khyber Pakhtunkhwa, Dr Abdul Samad said that sculptures and heads dating 2nd to 5th Century AD have been discovered during excavation, initiated at the Bhamala ruined Buddhist Stupa. During excavation precious coins of Kushan period were also unearthed around the Stupa.
Buddhist sculpture, coins of Kushan period discovered at Bhamala world heritage site
Bhamala Stupa is a ruined Buddhist stupa and National Heritage Site near Haripur, Pakistan.
Training programme for archaeology field staffs and students kicks off
It is a project of the Great Stupa of Universal Compassion Ltd, a non-profit organization which is building a very large Buddhist Stupa (temple) in Australia.
Statue of Jade Buddha for Universal Peace arrives in Japan
He has ordered that a commemorative Buddhist stupa be built near the site.
CORRECTED: LEAD: Cambodia holds day of mourning for 347 who died in stampede
"In 1999, the Park Service denied a third-party request to erect a Buddhist stupa near the cross."
Cross in Calif. park violates separation, says court
Gerard Fussmann, "Symbolisms of the Buddhist Stupa," JIABS 9.2 (1986): 37-53.
The Buddhist World of Southeast Asia
The Buddhist stupa is typically a large mound covering an interment of bones or other relics of a bodhisattva or Buddhist saint.
The stupa in Indian art: symbols and the symbolic
We can promote religious tourism through better infrastructure and special bus service to Panja Sab, Hasanabdal, Katas Raj Chakwal and Buddhist Stupa near Taxila, he added.
Commissioner assures traders of revamping Pindi
TAXILA -- The Lahore High Court (LHC) on Thursday disposed of a petition against the erection of a wall and gate blocking access to the ancient Buddhist Stupa and monastery Dharmarajika in Taxila and ordered the commissioner Rawalpindi to settle the issue in public interest.
LHC orders commissioner to resolve blockade of access to stupa