Electronic circuits whose primary function is to connect a high-impedance source to a low-impedance load without significant attenuation or distortion of the signal. Thus, the output voltage of a buffer replicates the input voltage without loading the source. An ideal voltage buffer is an amplifier with the following properties: unity gain, AB = 1; zero output impedance, Zout = 0; and infinite input impedance, Zin = ∞. For example, if the voltage from a high-impedance source, say a strain-gage sensor with 100 k&OHgr; output resistance, must be processed by further circuitry with an input impedance of, say, 500 &OHgr;, the signal will be attenuated to only 500/100,500 &ap; 0.5% of the sensor voltage if the two circuits are directly connected, whereas the full strain-gage voltage will be available if a buffer is used.

Buffers are generally applied in analog systems to minimize loss of signal strength due to excessive loading of output nodes (illus. a). Two kinds of circuits are frequently used: the operational-amplifier-based buffer and the transistor follower. 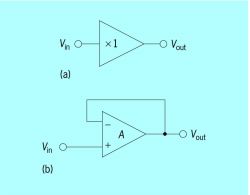 Here, s = j&ohgr; is the Laplace transform variable, j = -1; &ohgr; = 2&pgr;f is the radian frequency in radians per second (rad/s); and f is the frequency in hertz (Hz). The magnitude of AB is approximately equal to unity, that is, &verbar;AB&verbar; approaches 1, if &verbar;A&verbar; becomes very large. A common representation of the frequency dependence of the operational-amplifier gain is given by Eq. (2),
(2)

where &ohgr;t is the operational amplifier's unity-gain frequency. By using this notation, Eq. (1) becomes Eq. (3),
(3)

which shows that the buffer's bandwidth is approximately equal to the unity-gain frequency of the operational amplifier, typically 1 MHz or higher.

The very low output impedance of operational-amplifier-based buffers assures that a load impedance, ZL(s), does not affect the buffer's gain, AB. Also, operational-amplifier-based buffers have no systematic offset. The high-impedance input node of a buffer may in practice have to be shielded to prevent random noise from coupling into the circuit. This shielding can be accomplished with a coaxial cable. To eliminate the capacitive loading of the source by the effective input capacitance of the cable, the shield can be driven with the output voltage of the buffer so that no voltage difference exists between the signal line and the shield. The driven shield is referred to as the guard. See Amplifier, Operational amplifier

The bipolar junction transistor (BJT) emitter follower and the field-effect transistor (FET) source follower are very simple but effective buffer circuits. Both consist of a single transistor and a bias-current source; they are used in applications where power consumption and circuit area must be reduced to a minimum or where specifications are not too demanding.

The performance of a transistor follower circuit depends strongly on the source and load impedances, that is, on the surrounding circuitry. In fact, the transistors are so fast that the frequency response is usually determined by loading. In general, follower circuits exhibit a systematic direct-current (dc) offset equal to the base-to-emitter voltage, VBE, in BJTs and equal to the gate-to-source voltage, VGS, for FET. Only followers made with depletion-mode field-effect transistors can be biased with zero VGS to avoid this offset. See Emitter follower, Transistor

Feedback
Flashcards & Bookmarks ?
Please log in or register to use Flashcards and Bookmarks. You can also log in with
Flashcards ?
My bookmarks ?
+ Add current page to bookmarks
Mentioned in ?
References in periodicals archive ?
Saturated buffers are a new conservation practice, and the first USDA standard was published in 2016.
Saturated buffers reduce nitrogen in agricultural drainage
Two years ago, Slovakia became the first nation in the euro zone to introduce the buffer. It had then imposed a rate of 0.5 percent that came into effect last year.
Slovak central bank says it is ready to increase capital buffers
Few other projects like this are currently in use on agricultural fields and Schoonover, and the forestry team at Southern Illinois University, are hoping their research helps to propel saturated buffers into different regions and provide local farmers with a management practice perfect for their unique situation.
Better water for crops SIU professor provides tool to assist farmers in maintaining water quality
Caption: Primary Weapons Systems buffers also work well and are well made.
The buffer system: an important part of a "balanced" AR
Each of the devices' two independent buffer channels offers up to eight low-skew outputs.
IDT Extends 1.8 V RF Timing Family with Dual-Channel Buffer Devices that Deliver High Performance, Low Power
In the proposed scheme, energy consumption minimization is the objective with the consideration of relay buffer state, outage probability and relay power control, in order to eliminate IRI.
Energy-efficient buffer-aided optimal relay selection scheme with power adaptation and inter-relay interference cancellation
Buffer preparation, like culture media preparation, is a task classically performed in-house by bioprocessing facilities.
Economics of in-house buffer preparation: evaluating the cost effectiveness of keeping basic ops in-house
Second, the buffer zone distance is a key driver of the resulting acreage in buffers, dramatically changing affected acreage according to the percentile of protection in the 2013 proposal.
Revised chloropicrin use requirements impact strawberry growers unequally
Another option is to peruse Heavybuffers.com, they offer a wide variety of AR buffers, 9mm buffers, AR-10 buffers along with special designs for Vltor's A5 system and LWRCI's UCIW short receiver extension.
Make your AR 'buffer': a different buffer and adjustable gas block might just be what your carbine needs to run its best
The above mentioned snap shot indicates the cluster formation of network on-chip in 16 numbers of processors with buffers. Each cluster having its own source to transfer the data into buffers.
An efficient and novel buffer clustering technique for minimal data loss, load balancing and effective queue management in multi core processors
Heid [12] has very effectively pointed out and added to the discussion of capital buffers that why these buffers tend to move in an anti-cyclical way Secondly, he has tried to argue that it is not necessary for capital to exhibit a pro- cyclical behavior under Basel II capital accord.
DO MACROECONOMIC AND BANK SPECIFIC FACTORS AFFECT CAPITAL BUFFER: CASE OF PAKISTANI BANKS
NPS a rapid access to on-chip buffered data and to re-use this data as many times as required by NPS without using external memory bandwidth [4,5].
FPGA Based Compact and Efficient Full Image Buffering for Neighborhood Operations