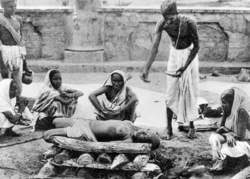 The very first religious ritual of which there is evidence seems to have been a funeral service. Archaeologists have discovered Neanderthal grave burials, dating back to 60,000 BCE, in which the dead are buried with animal antlers, tools, and floral arrangements. Although we will never know for sure, this certainly seems to indicate a religious ritual demonstrating a belief in an afterlife. Why else would precious tools, which took a lot of effort and time to make, be buried with the corpse?

Although some tribes exist whose people simply run away from their dead, the vast majority of cultures practice funeral rituals and practices that have three things in common:

1. Some type of funeral rite or ceremony is conducted indicating respect for the dead or death itself.

2. The dead are placed in an area that has either been previously recognized as sacred or becomes sacred after the ceremony.

3. The dead are memorialized or remembered.

Because we know of no cultures prior to the Neanderthal, and because these practices arose at the time of our own ancestors during the Cro-Magnon period, the burial ritual must be considered to be among the very first religious practices, if not the very first, of the human race.

Perhaps because of biological processes of decay, fear seems to be universally present in the face of death. The corpse is considered "unclean." The Polynesian word tabu (sometimes spelled kapu in English) and its English equivalents, defilement and pollution, express this thought. In the Bible, the book of Numbers 5:2 reads, "Whosoever is unclean by the dead shall be put outside the camp, that they defile not the camp in the midst of which the Lord dwells."

Fire (cremation) was often used to destroy evil spirits believed to be present in the body, but most cultures bury their dead to remove the corpse from human contact. "A shallow grave" is often considered a disparaging term, only to be dug as a last resort when circumstances do not permit anything else. Otherwise, "six feet under," the average height of a man, seems to be the rule.

Some of the Rocky Mountain Indians of the American West practiced a ritual that is the opposite of burial: the dead were not buried, but elevated. Elaborate rituals and taboos consecrated holy ground where corpses, along with many rich possessions, were placed on scaffolds built six feet or more above the earth. These above-ground cemeteries were sacred, as is so beautifully illustrated in the sensitive treatment given to the custom in the movie Jeremiah Johnson, starring Robert Redford.

Barrows of stone are built by many cultures, ranging from simple stone cemetery markers to caves of earth and rock. These are eclipsed by the great pyramids of Egypt, certainly the most elaborate "barrows" of them all.

If the Egyptians were not the first to practice embalming, they at least perfected the art. Belief in an afterlife was so strongly developed that a new king's first order of business was to begin building his tomb. The Egyptians and Chinese were famous for lavishly providing for their leader's future lifestyle in the hereafter.

According to the practices of some cultures, the greatest sign of respect for the passing of a loved one is self-mutilation or even death. When a Hawaiian alii, or member of the royalty, died, it was considered proper to mark the occasion by knocking out one's teeth and gouging out one's own eyes. In Japan the custom arose that at least twenty or thirty of a rich lord's slaves were ordered to commit hara-kiri, ritual suicide. And pity the poor Hindu wives who were expected to throw themselves onto their dearly departed husband's funeral pyre. Meanwhile, in Fiji it was considered correct for not only wives but also friends to be strangled after a loved one's death. The thought was that the dead deserved company in the hereafter.

Customs differ by gender in some cultures. Cochieans bury their women, while their men are suspended from trees. Sometimes women are buried, while men are cremated. There is an African custom practiced by some tribes in which men are meticulously buried facing north while women face south.

When we think of these traditions, it is quite natural to think we have outgrown primitive superstition and ritual. But many customs practiced today have their basis in such practices. When movies or television shows depict a doctor somberly drawing a sheet over the face of a person who just died, it is seen as a dramatic action conveying the finality of death. But this custom began long ago. Ancient tradition holds that the spirit of the deceased escapes through the mouth. Covering the face is an attempt to prolong life by preventing the spirit from leaving. Some cultures even held the mouth and nose of a sick person shut to prevent death.

Today's "wakes" began as a gathering to keep watch over the dead, hoping that the spirit would return. (Conversely, some say the wakes served to make sure the deceased really was dead, not just comatose.) But just in case the returning spirit was not in good humor, "mourning clothes" were worn as disguises in hopes that the malignant spirit, not recognizing those gathered, would become confused and leave them alone. Candles would be lit because fire was known to discourage such spirits, and bells were rung to frighten them away.

In early Christianity, holy water was sprinkled on the body to protect it from demons. Floral offerings were intended to gain favor with the spirit of the deceased. Funeral music began with the chanting of priests to placate departed spirits.

At military funerals it is the custom to fire a rifle volley. This tradition is mirrored by the tribal practice of throwing spears or shooting arrows over the body in an attempt to dislodge the spirits gathered there.

This is not to say that modern funeral customs are simply superstition. They may have begun that way, but contemporary psychology recognizes the importance of ritual for human closure at the time of loss. Funeral ritual serves an important psychological purpose.

customs associated with the disposition of the dead and with the expression of attitudes toward the deceased and toward death.

Man buried the dead in pits and caves as early as the middle Paleolithic. This was a well-known form of care for the dead associated with the beginnings of religious concepts. In time, belief in a life beyond the grave gave rise in primitive society to a dualistic attitude toward the dead person. On the one hand, solicitousness for the deceased was shown by adorning and dressing him in special garments and leaving him food, tools, weapons, and sometimes even means of transport, such as a sled or boat. On the other hand, fear of the deceased was shown by attempts to render him harmless and prevent his return. For example, the body was sometimes bound in a flexed position or removed from the house through a special opening.

In addition to interment, which is the most widespread form of burial, cremation has been known since the Bronze Age. After burning the corpse, European peoples buried the ashes in the ground, while certain Middle Asian peoples placed the ashes in miniature coffins called ossuaries, which in turn were placed in special rooms called naus. The Hindus still burn their dead on pyres and throw the ashes into the water. Some peoples—those of Oceania, for example—placed the deceased in a boat, which was then set afloat. The Australians, North American Indians, and some Siberian peoples left the corpse outdoors—in trees or on platforms. To this day the Parsi leave the dead in special towers, to be eaten by birds.

With the decline of the primitive clan system, burial customs became sharply differentiated. A complex ritual was developed for tribal leaders, princes, and shamans and later for priests and kings. Ancestor worship developed into the veneration of dead kings and high priests. Belief that the soul would continue to exist as long as the body was preserved led to customs of preserving the body, such as mummification among the ancient Egyptians and Incas, and of creating portraitures of the deceased, such as burial masks and statues at the gravesite. In honor of the dead, artificial mounds (barrows) were raised over the graves, pyramids were erected, and funerary temples and chapels were built. Sacrifices were brought to the dead ruler to appease his soul: slaves and wives were killed and cattle and horses were slaughtered, for example, among the Scythians and ancient Slavs. Repasts and games were held at the grave. Among modern peoples, both interment and cremation are practiced.

Feedback
Flashcards & Bookmarks ?
Please log in or register to use Flashcards and Bookmarks. You can also log in with
Flashcards ?
My bookmarks ?
+ Add current page to bookmarks
Mentioned in ?
References in classic literature ?
Then he seemed quite inspired, though the burial customs of the ancients, to which the conversation had strayed, might not be considered an exhilarating topic.
View in context
Her work is marked by sound methodology and sensitivity to a variety of factors that influenced both burial customs and the attendant beliefs they represented, including geological and environmental influences, ethnicity, cultural patterning, the selective nature of the archaeological evidence, and the need to treat that evidence as an independent witness to beliefs.
Judahite Burial Practices and Beliefs about the dead
His archaeological analysis is set in a strong anthropological context: kinship networks, population studies, regional industries, diet, clan structure, burial customs - all of these figure in his reconstruction of that age.
Law and Ideology in Monarchic Israel
"The new discoveries can provide valuable information for future studies on local burial customs and social life in Yuan dynasty," he added.
China: 7 coloured murals discovered in ancient tomb in Shanxi
He noted that historically, a number of African communities did not bury their dead and said the burial customs we practice are borrowed from other parts of the world.
Ashes to ashes: Acceptance of cremation as burial costs rise
Coroners said they hoped to let grieving relatives fulfil Islamic burial customs soon, but insisted they had to move carefully through their investigation into the horrific multiple murder.
Graves prepared as New Zealand looks to bury mosque massacre dead
Coroners said they hoped to let grieving relatives fulfill Islamic burial customs soon, but insisted they had to move carefully through their investigation into the horrific multiple murder.
Families of Christchurch dead in agonizing wait for burials
About two dozen men received instructions on their duties, which included Muslim burial customs.
New Zealand digs graves as death toll rises to 50
Some specific subjects include the Kamilai tholos tombs, the house tomb in northeast Crete, patterns in the burial customs of Bronze Age Crete, and mortuary variability and special differentiation in pre-palatial Crete.
From the Foundations to the Legacy of Minoan Archaeology: Studies in Honour of Professor Keith Branigan
Kerma was Nubia's first centralized state with its own indigenous forms of architecture and burial customs.
SUDAN PYRAMIDS
I was looking at all of these reflecting on how our burial customs have changed over the last half century, with people moving from cemeteries to crypts, with people choosing to bury an urn with ashes rather than a whole corpse in a coffin.
Dying traditions
"Presumably, Viking Age burial customs were influenced by Islam and the idea of an eternal life in paradise after death," textile archaeology researcher Annika Larsson said in the Uppsala statement.
These Muslim Names Are Hidden In Viking Age Clothes