divinyl rubbers, a group of synthetic rubbers; products of the polymerization of butadiene. Upon polymerization, butadiene molecules (I) may combine with the participation of either of two or both double bonds, forming polymers with different configurations of the chemical monomer units in the macromolecule: 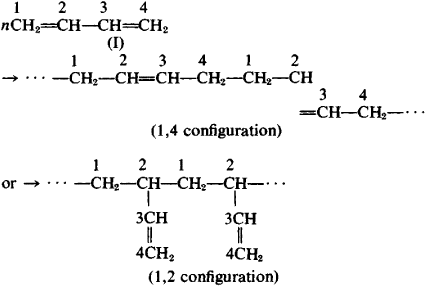 Two isomers—cis (II) and trans (III)—are possible for the 1, 4 configuration:

Catalysts used to obtain butadiene rubbers include alkaline metals (chiefly sodium) and complex compounds of the type CoCl2 + Al(C2H5)2Cl, TiCl4 +Al (C2H5)3, and others (the so-called Ziegler-Natta coordination-ionic catalysts), and organometallic compounds (for example, lithium n-butylate). Nonstereoregular butadiene rubbers containing 60-66 percent 1, 2 monomer units and 34-40 percent 1, 4 monomer units (mainly of trans-structure) are obtained in the presence of alkali metals. The reaction of stereospecific polymerization takes place in the presence of the other catalysts listed above. This reaction results in the formation of stereoregular polymers containing about 98 percent 1, 4 monomer units, including 32-98 percent units of cis-structure. The content of the latter is determined by the type of catalyst. Butadiene rubber with high (93-98 percent), average (87-95 percent), and low (35-40 percent) content of 1, 4 -cis monomer units are obtained in the presence of cobalt, titanium, and organic-lithium catalysts respectively.