an aviation jet engine in which the air entering it is divided into two streams that are ducted through and past the engine. The first turbofan engine with an ejector was proposed by the Kiev inventor F. R. Geshvend in 1887; the first turbofan engine was proposed by K. E. Tsiolkovskii in 1932, and in 1939, A. M. Liul’ka developed a design for an engine with a compressor and division of the airflows at the intake. In 1939 the French engineer R. Imbert proposed bypass turbojet engines with various numbers of fan and primary flow compressor rotors, both linked by a gear drive and mechanically independent. In 1947 the Soviet engineer V. F. Pavlenko developed a design for an engine with division of the airflows behind the compressor. A bypass turbojet with a heat exchanger in the bypass duct and an additional gas compressor in the primary duct between the turbine and the jet nozzle, to reduce the pressure behind the turbine to below atmospheric pressure, was proposed in 1948 by the Soviet engineers M. G. Dubinskii, S. Z. Kopelev, and A. O. Matsuk. The German engineer K. Leist received a patent 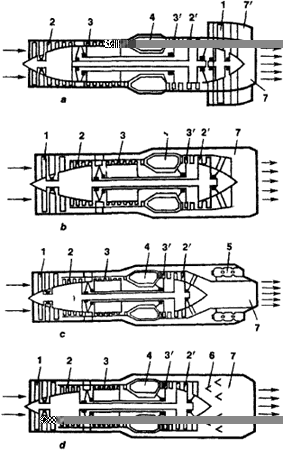 in 1953 for a bypass turbojet engine with a twin rotating primary airflow compressor (that is, a compressor having inner and outer rotors), in which one of two contrarotating rotors (the outside one) carries the working blades of the bypass duct fan. The thrust of the bypass turbojet engine is composed of the forces of reaction of the air streams and the products of combustion, which have been accelerated in the primary and secondary airflows and flow out through two independent jet nozzles (Figure 1, a and c) or one common nozzle (Figure 1, b and d). The bypass duct is a ring-shaped channel with a fan or compressor located in it behind a turbocompressor (Figure 1 , a) or in front of it (Figure l, c). Forward placement of the fan permits its use to compress the air entering the primary duct.

Engines in which the bypass ratio (the ratio of the air discharged through the secondary and primary ducts) is greater than 1 are generally called turbofan engines. The bypass ratio of various types of bypass turbojet engines varies from 0.5 to 8. The degree of increase in air pressure varies from 10 to 26 in the primary duct compressor and from 1.5 to 2.5 in the bypass compressor. An increase in the temperature of the gas in front of the turbine radically improves the engine’s performance; in modern engines the temperature reaches 1600° K. The rotor of a bypass turbojet engine may have two shafts, and sometimes even three (Figure 2), with each shaft rotating at a different speed. 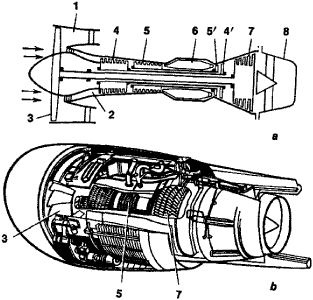 The main feature of a bypass turbojet engine is that, for an equal expenditure of energy, a lesser acceleration is imparted to a’ considerably larger mass of air than in a conventional turbojet engine. Because of this, the thrust at takeoff and in subsonic flight is increased, and the unit consumption of fuel is decreased.

Engines with a bypass ratio of 1 have 25 percent more takeoff thrust than turbojet engines, with the same thrust at a speed of 1,000 km/hr and considerably less noise from the exhaust jet, because of its lower speed. Bypass turbojet engines are widely used in the USSR and abroad in subsonic, largely passenger, airplanes (such as the 11–62, Tu-134, and Boeing 727), and in airplanes with vertical takeoff or short takeoff and landing ability. When the flight speed increases to more than 1,000 km/hr, the thrust of a bypass turbojet engine decreases sharply because of the low speed of the exhaust jet. To increase this speed, additional fuel is burned in the bypass duct (Figure l, c) or in a common mixing chamber (Figure l, d). This makes possible the use of bypass turbojet engines in supersonic airplanes, as well.