(300–1450)
When the seat of the Roman Empire moved to Byzantium, a new style became the official architecture of the church.Plans were based on a Greek cross, with a large cupola rising from the center and smaller ones crowning the four small arms. The style was characterized by large domes supported on pendentives, circular or horseshoe arches, elaborate columns and richness in decorative elements. Doorways were square-headed with a semicircular arch over the flat lintel. The round arch, segmented dome, extensive use of marble veneer and rich frescoes with colored glass mosaics are also characteristic of this style. The most well-known examples are the Hagia Sophia in Istanbul, and St. Marks (illus.), in Venice, Italy. 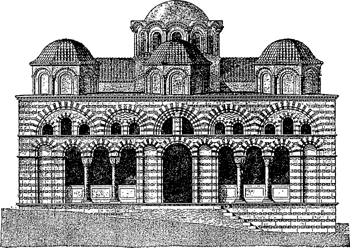 Byzantine architecture
The architecture of the Byzantine or Eastern Roman Empire which developed from Early Christian and late Roman antecedents in the 4th cent., flourished principally in Greece, but spread widely and lasted throughout the Middle Ages until the fall of Constantinople to the Turks (1453). It is characterized by large pendentive-supported domes, round arches and elaborate columns, richness in decorative elements, and color. The most famous example is the Hagia Sophia in Istanbul (532–537).
McGraw-Hill Dictionary of Architecture and Construction. Copyright © 2003 by McGraw-Hill Companies, Inc.

Feedback
Flashcards & Bookmarks ?
Please log in or register to use Flashcards and Bookmarks. You can also log in with
Flashcards ?
My bookmarks ?
+ Add current page to bookmarks
Mentioned in ?
References in periodicals archive ?
[27] On a grander scale Bentley's designs for Westminster Cathedral in London were also in the Byzantine style, [28] and in the architectural competition for the new Liverpool Cathedral a Byzantine design had been submitted, although importantly (as will be seen below) the usage of the Byzantine style for Liverpool was felt to be unsuitable, Gothic being preferred.
ARCHITECTURE, INCULTURATION AND CHRISTIAN MISSION
Quennell in the byzantine style and shares with the Hannen columbarium similar architectural massing and a coursed, polychromatic exterior.
Byzantium in Berkshire: fresh information on Sir Edwin Lutyens's first mausoleum, the Hannen columbarium at St Mary, Wargrave, Berkshire, is provided by correspondence published here for the first time by Oliver Bradbury. This small masterpiece shows Lutyens combining byzantine, classical and Arts and Crafts influences
The monasteries boast fine Byzantine style architecture and house many treasures, including rarely seen icons.
Drawn to the rare beauty of Mt Athos
The icon is a 300-year-old image of Jesus, produced in the Byzantine style in the Heraclidios monastery near Nicosia, which produced icons for most of the churches in Cyprus in the 18th century.
Singer Boy George returns Cypriot icon he's had for 26 years
The concert hall is set to fill a gap in the curve of redbrick structures, originally designed in the Byzantine style by Sir Aston Webb.
Historians see red at university hall design
The curved range of Edwardian red brick buildings - which it is believed gave the generic term "redbrick" to civic universities - was designed in a Byzantine style by Sir Aston Webb, and is still known as the Aston Webb building.
pounds 16m hall to complete campus
New Byzantine style nativity scenes will also be placed in four parts of the city," Mavrou said.
Christmas moves down the road in Nicosia
A further five minute walk reveals the 15th century church of St Sofia, built in Byzantine style and church which the city took its name from.
Sofia ... so good; Neil Hodgson has a capital time as he enjoys a weekend in Bulgaria
Associated with Romanesque and Byzantine styles, Bro.
Tabula Rasa: The Paintings and Mosaics of Brother Campos
| Visit uffizi.it/en/the-uffizi POSE FOR PICTURES AT SAN MINIATO PERCHED on a hilltop a 20-minute walk from the Ponte Vecchio, this 1,000-year-old church is a fine mish-mash of Romanesque and Byzantine styles.
Florence and the cuisine; FROM TOP TUSCAN DISHES TO PHOTO HOTSPOTS, GALLERIES TO GELATOS, SARAH MARSHALL SHARES HER PICK OF THE CITY'S FOOD AND CULTURE