(kīĕn`, kāĕn`), city and district (1990 pop. 41,659), capital of French GuianaFrench Guiana
, Fr. La Guyane française, officially Department of Guiana, French overseas department (2015 est. pop. 269,000), 35,135 sq mi (91,000 sq km), NE South America, on the Atlantic Ocean.
..... Click the link for more information. , on Cayenne island at the mouth of the Cayenne River. The city has a shallow harbor, and deep-draft ships must anchor some distance out. Timber, rum, essence of rosewood, and gold are exported. Cayenne was founded by the French in 1643, but it was wiped out by a Native American massacre and was not resettled until 1664. Throughout the 17th cent. the city and its surrounding region were sharply contested by Great Britain, France, and the Netherlands. It was occupied (1808–16) by both the British and the Portuguese. From 1851 to 1946 the city was the center of French penal settlements in Guiana, and part of its population is made up of prisoners' descendants. Cayenne's development has long been hindered by internal strife, a hot, wet climate, and the prevalence of disease. In the city are the Pasteur Institute, which specializes in the study of tropical diseases, and several buildings from the colonial period; there is an international airport. The city gives its name to cayenne pepper, a very sharp condiment found on the island in abundance.
The Columbia Electronic Encyclopedia™ Copyright © 2013, Columbia University Press. Licensed from Columbia University Press. All rights reserved. www.cc.columbia.edu/cu/cup/ 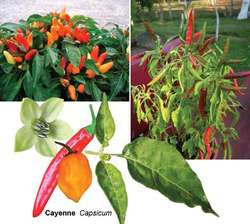 One of the best circulation boosters there is. Seriously boosts circulation and body heat. Helps ease pain in joints and muscles. Helps the whole cardiovascular system, good for the heart. Great antiinflammatory. Carotenoids in red peppers have been shown clinically to improve lifespan in primates. Helps digestion, burn calories, lose weight. Capsicum cream is good for arthritis, neuralgia, fibromyalgia, sports injuries, sore & sprained muscles. Cayenne unblocks and brings life and vitality back to the whole body. Put it on cuts to stop bleeding (no it doesn't burn). In emergencies, it's helped save people who were having heart attacks, strokes or fainting. Regular usage is good for blood clots, heart disease. Helps reduce elevated blood sugars in diabetics. Hypoglycemics are advised to stay away from hot peppers though because it drops blood sugar levels. Helps boost immune system, fight shingles, is a natural antibiotic, increases digestive secretions, thus relieving gas and colic. Taking cayenne with anything else increases the power, absorption and effect of the other herbs. It’s advisable not to eat the flowers from peppers. (nightshade)
Edible Plant Guide © 2012 Markus Rothkranz
The following article is from The Great Soviet Encyclopedia (1979). It might be outdated or ideologically biased.

a city, the administrative center of French Guiana.Population, 24, 500 (1967). Cayenne is the country’s chief port, located at the mouth of the Cayenne River. Rum, wood, fish, raw leather, and other products are exported. Cayenne was foundedin the first half of the 17th century.