[′shād·əd ¦pōl ′mōd·ər]
(electricity)
A single-phase induction motor having one or more auxiliary short-circuited windings acting on only a portion of the magnetic circuit; generally, the winding is a closed copper ring embedded in the face of a pole; the shaded pole provides the required rotating field for starting purposes.
McGraw-Hill Dictionary of Scientific & Technical Terms, 6E, Copyright © 2003 by The McGraw-Hill Companies, Inc.
The following article is from The Great Soviet Encyclopedia (1979). It might be outdated or ideologically biased.

a squirrel-cage induction motor in which a rotating magnetic field is created by the field winding (FW) and a short-circuited winding (SW) that encircles a part of each stator pole (Figure 1). The pulsating magnetic flux produced by FW induces currents in SW that, according to Lentz’s law, cause the pulsating magnetic flux through SW to be delayed compared with the other portion. This is the shading effect of SW. The rotor turns under the influence of the magnetic field that is created by the magnetic fluxes from the shaded and unshaded parts of the stator poles as a result of the displacement of the flux axes by angle θ and of the pulsation of the fluxes with the time lag. 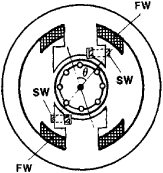 Figure 1. Cross section of a shaded-pole motor: (FW) field winding, (SW) short-circuited winding, (θ) angle between the axes of the magnetic fluxes from the shaded and unshaded parts of the stator poles

Shaded-pole motors are used to drive tape recorders, record players, table fans, and other equipment for which a power of 20–300 watts is sufficient.

Feedback
Flashcards & Bookmarks ?
Please log in or register to use Flashcards and Bookmarks. You can also log in with
Flashcards ?
My bookmarks ?
+ Add current page to bookmarks
Mentioned in ?
References in periodicals archive ?
The next crew added to the staff in December will assemble C-Frame motors that can be used for such things as cooling mechanisms on copying machines.
Industrial growth bustin' out all over Arkansas