Software that converts audio and video content into formats for computer storage and playback. See ripping and MP3.
Copyright © 1981-2019 by The Computer Language Company Inc. All Rights reserved. THIS DEFINITION IS FOR PERSONAL USE ONLY. All other reproduction is strictly prohibited without permission from the publisher.
The following article is from The Great Soviet Encyclopedia (1979). It might be outdated or ideologically biased.

an excavating machine for loosening layers of frozen soil, rock (usually of medium strength), and artificial surfaces in layers using the tractive force of a prime mover. Rippers are used in construction together with other excavating machines to prepare foundation pits, canals, and trenches; they are also used for stripping work in open-pit mines.

Rippers are equipped with a trailer or mounted tined device with elements for attachment to the prime mover and a hydraulic drive. A distinction is made between three-armed, four-armed, and parallelogram mounted devices. Rippers may have remote adjustment for the angle, operating width, and depth of ripping. The working member of the ripper is a tooth with a replaceable tip and a wear-resistant protective covering. Modern rippers usually have a hydraulic drive to raise and lower the teeth, change the ripping angle of the tip of the tooth, control the mechanism that positions the arms, and change the spacing of the teeth. Some rippers have shock absorbers to reduce the transfer of peak dynamic loads to the prime mover and attachments for working with push tractors. 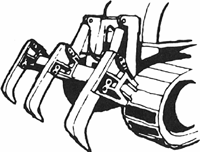 ripper, 1
1. An attachment with long angled teeth that fits on the rear of a tractor or is towed by it; penetrates and loosens subsurface layers of earth to a depth of up to 3 ft (approx. 1 m).
2. A tool used for removing damaged slates on a roof; consists of a long steel blade with a notched hook at one end for withdrawing nails.
3. A towed machine, provided with teeth to loosen hard soil and soft rock.
McGraw-Hill Dictionary of Architecture and Construction. Copyright © 2003 by McGraw-Hill Companies, Inc.

Feedback
Flashcards & Bookmarks ?
Please log in or register to use Flashcards and Bookmarks. You can also log in with
Flashcards ?
My bookmarks ?
+ Add current page to bookmarks
Mentioned in ?
References in periodicals archive ?
The newly added enhancements to Smart CD Ripper include a significant speed boost as well as improved quality of the converted files.
Smart CD Ripper Has Been Upgraded
Smart CD Ripper is one of SmartSoft's top-selling products, enabling the extraction of music from CDs and converting it to digital files.
Smart CD Ripper Pro Now Available
MP3 has caused piracy and copyright concerns, particularly around 'CD rippers' which copy audio files from copyrighted CDs into MP3 format.
Music revolution with new software; INTERACTIVE