Although he was born into the Julian gens, one of the oldest patrician families in Rome, Caesar was always a member of the democratic or popular party. He benefited from the patronage of his uncle by marriage, Caius Marius. In 82 B.C., when Caesar refused to obey Sulla's order to divorce Cornelia, the wealthy daughter of Lucius Cornelius Cinna, he was proscribed and subsequently fled from Rome (81 B.C.).

On Sulla's death, Caesar returned (78 B.C.) and began his political career. He quickly gained popularity with his party and a reputation for oratory. In 74 B.C. he went into Asia to repulse a Cappadocian army. Upon his return, he agitated for reform of the government on popular lines and helped to advance the position of Pompey, the virtual head of the popular party. Caesar was made military tribune before 70 B.C. and was quaestor in Farther Spain in 69 B.C.; he helped Pompey to obtain the supreme command for the war in the East. He returned to Rome in 68 B.C., and in Pompey's absence was becoming the recognized head of the popular party. His praise of Marius and Cinna made him popular with the people, but earned him the hatred of the senate.

In 63 B.C. he was elected pontifex maximus [high priest], allegedly by heavy bribes. His later reform of the calendar with the help of Sosigenes, was one of his greatest contributions to history. In Dec., 63 B.C., Caesar advocated mercy for Catiline and the conspirators, thereby increasing the enmity of the senatorial party and its leaders, Cato the Younger and Quintus Lutatius Catulus (see Catulus, family). In 62 B.C., Clodius and Caesar's second wife, Pompeia, were involved in a scandal concerning the violation of the secret rites of Bona Dea, and Caesar obtained a divorce, saying, “Caesar's wife must be above suspicion.”

Having served in Farther Spain as proconsul in 61 B.C., he returned to Rome in 60 B.C., ambitious for the consulate. Against senatorial opposition he achieved a brilliant stroke—he organized a coalition, known as the First Triumvirate, made up of Pompey, commander in chief of the army; Marcus Licinius Crassus, the wealthiest man in Rome (see Crassus, family); and Caesar himself. Pompey and Crassus were jealous of each other, but Caesar by force of personality kept the arrangement going.

In 59 B.C. he married Calpurnia. In the same year, as consul, he secured the passage of an agrarian law providing Campanian lands for 20,000 poor citizens and veterans, in spite of the opposition of his senatorial colleague, Marcus Calpurnius Bibulus. Caesar also won the support of the wealthy equites by getting a reduction for them in their tax contracts in Asia. This made him the guiding power in a coalition between people and plutocrats.

He was assigned the rule of Cisalpine and Transalpine Gaul and Illyricum with four legions for five years (58 B.C.–54 B.C.). The differences between Pompey and Crassus grew, and Caesar again moved (56 B.C.) to patch up matters, arriving at an agreement that both Pompey and Crassus should be consuls in 55 B.C. and that their proconsular provinces should be Spain and Syria, respectively. From this arrangement he drew an extension of his command in Gaul to 49 B.C. In the years 58 B.C. to 49 B.C. he firmly established his reputation in the Gallic Wars.

In 55 B.C., Caesar made explorations into Britain, and in 54 B.C. he defeated the Britons, led by Cassivellaunus. Caesar met his most serious opposition in Gaul from Vercingetorix, whom he defeated in Alesia in 52 B.C. By the end of the wars Caesar had reduced all Gaul to Roman control. These campaigns proved him one of the greatest commanders of all time. In them he revealed his consummate military genius, characterized by quick, sure judgment and indomitable energy. The campaigns also developed the personal devotion of the legions to Caesar. His personal interest in the men (he is reputed to have known them all by name) and his willingness to undergo every hardship made him the idol of the army—a significant element in his later career.

In 54 B.C. occurred the death of Caesar's daughter Julia, Pompey's wife since 59 B.C. She had been the principal personal tie between the two men. During the years Caesar was in Gaul, Pompey had been gradually leaning more and more toward the senatorial party. The tribunate of Clodius (58 B.C.) had aggravated conditions in Rome, and Caesar's military successes had aroused Pompey's jealousy. Crassus' death (53 B.C.) in Parthia ended the First Triumvirate and set Pompey and Caesar against each other.

After the First Triumvirate ended, the senate supported Pompey, who became sole consul in 52 B.C. Meanwhile, Caesar had become a military hero as well as a champion of the people. The senate feared him and wanted him to give up his army, knowing that he hoped to be consul when his term in Gaul expired. In Dec., 50 B.C., Caesar wrote the senate that he would give up his army if Pompey would give up his. The senate heard the letter with fury and demanded that Caesar disband his army at once or be declared an enemy of the people—an illegal bill, for Caesar was entitled to keep his army until his term was up.

Two tribunes faithful to Caesar, Marc Antony and Quintus Cassius Longinus (see under Cassius) vetoed the bill and were quickly expelled from the senate. They fled to Caesar, who assembled his army and asked for the support of the soldiers against the senate. The army called for action, and on Jan. 19, 49 B.C., Caesar with the words “Iacta alea est” [the die is cast] crossed the Rubicon, the stream bounding his province, to enter Italy. Civil war had begun.

Caesar's march to Rome was a triumphal progress. The senate fled to Capua. Caesar proceeded to Brundisium, where he besieged Pompey until Pompey fled (Mar., 49 B.C.) with his fleet to Greece. Caesar set out at once for Spain, which Pompey's legates were holding, and pacified that province. Returning to Rome, Caesar held the dictatorship for 11 days in early December, long enough to get himself elected consul, and then set out for Greece in pursuit of Pompey.

Caesar collected at Brundisium a small army and fleet—so small, in fact, that Bibulus, waiting with a much larger fleet to prevent his crossing to Epirus, did not yet bother to watch him—and slipped across the strait. He met Pompey at Dyrrhachium but was forced to fall back and begin a long retreat southward, with Pompey in pursuit. Near Pharsalus, Caesar camped in a very strategic location. Pompey, who had a far larger army, attacked Caesar but was routed (48 B.C.) and fled to Egypt, where he was killed.

Caesar, having pursued Pompey to Egypt, remained there for some time, living with Cleopatra, taking her part against her brother and husband Ptolemy XIII, and establishing her firmly on the throne. From Egypt he went to Syria and Pontus, where he defeated (47 B.C.) Pharnaces II with such ease that he reported his victory in the words “Veni, vidi, vici” [I came, I saw, I conquered]. In the same year he personally put down a mutiny of his army and then set out for Africa, where the followers of Pompey had fled, to end their opposition led by Cato.

On his return to Rome, where he was now tribune of the people and dictator, he had four great triumphs and pardoned all his enemies. He set about reforming the living conditions of the people by passing agrarian laws and by improving housing accommodations. He also drew up the elaborate plans (which Augustus later used) for consolidating the empire and establishing it securely. In the winter of 46 B.C.–45 B.C. he was in Spain putting down the last of the senatorial party under Gaeus Pompeius, the son of Pompey. He returned to Rome in Sept., 45 B.C., and was elected to his fifth consulship in 44 B.C. In the same year he became dictator for life and set about planning a campaign against Parthia, the only real menace to Rome's borders.

His dictatorial powers had, however, aroused great resentment, and he was bitterly criticized by his enemies, who accused him of all manner of vices. When a conspiracy was formed against him, however, it was made up of his friends and protégés, among them Cimber, Casca, Cassius, and Marcus Junius Brutus. On Mar. 15 (the Ides of March), 44 B.C., he was stabbed to death in the senate house. His will left everything to his 18-year-old grandnephew Octavian (later Augustus).

Caesar has always been one of the most controversial characters of history. His admirers have seen in him the defender of the rights of the people against an oligarchy. His detractors have seen him as an ambitious demagogue, who forced his way to dictatorial power and destroyed the republic. That he was gifted and versatile there can be little doubt. He excelled in war, in statesmanship, and in oratory.

His literary works are highly esteemed. Of Caesar's literary works, his commentaries on the Gallic Wars (seven books) and on the civil war (three books) survive. They are masterpieces of clear, beautiful, concise Latin, and they are classic military documents. Caesar wrote poetry, but the only surviving piece is a poem on Terence. 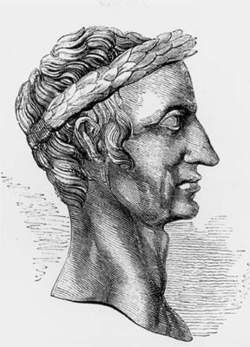 Julius Caesar (100-44 BCE) is best known as the emperor who united Rome and built the foundation for its European domination. Popularized by his own writings and those of such notables as William Shakespeare, his story has become legend.

What is not so well documented is the cost of his endeavors to the storehouse of Western religious thought. While serving as captain of the armies of Rome, Caesar was well aware that his political future depended upon military victories to the north and west of Italy. To achieve those victories he was willing to do almost anything, including tearing the spiritual heart out of his enemies.

Knowing the popular will to resist him depended upon the influence of the Druids, the indigenous religious leaders of Gaul, Caesar set out to destroy completely the Druidic priesthood and all semblance of the religion that had, for untold generations, united the people of present-day France. The sacred groves of the Druids were destroyed. Any practice of indigenous paganism was outlawed. One by one, local traditions were rooted out and eliminated. A powerful propaganda campaign was launched, with Caesar's own Gallic Wars leading the way. And, since history is written by the victors, a religion that served the people of Western Europe for hundreds, if not thousands, of years was almost lost to human memory. Only in the past few decades have we begun to understand the religious history of a culture that connected people to the earth and empowered them in their daily lives. Caesar also made a second-hand contribution to Christian history. In 46 BCE he commissioned a calendar that was henceforth called the Julian Calendar. The month of July still bears his name. With modifications and corrections ordered by Pope Gregory XIII in 1582, it became the Gregorian calendar used today.