anything, such as a photoelectric cell, that receives a signal or stimulus and responds to it
Collins Discovery Encyclopedia, 1st edition © HarperCollins Publishers 2005
The following article is from The Great Soviet Encyclopedia (1979). It might be outdated or ideologically biased.

(in Russian, datchik; also pickup), an element of a measuring, signaling, regulating, or control device in a system that converts the value being monitored (such as pressure, temperature, frequency, velocity, displacement, voltage, or electric current) into a signal that is convenient for measurement, transmission, conversion, storage, and recording, as well as for influencing the processes being regulated.

A sensor usually contains a receiving (sensing) member, as well as one or more intermediate converters (see Figure 1). However, the sensor frequently consists only of the receiving member (for example, a thermocouple, a resistance thermometer, or a strain gauge). The output signals of a sensor are distinguished according to the type of energy (electrical, mechanical, pneumatic, or less frequently, hydraulic) and the type of modulation of the energy flow (amplitude, frequency, phase, or discrete [coded]).

The operation of the most common sensors is based on a 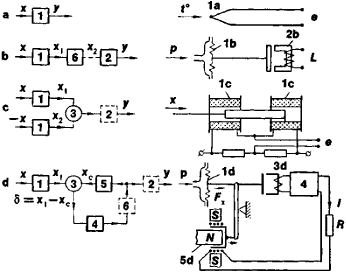 change in the electrical resistance, capacitance, inductance, or mutual inductance of an electrical circuit (resistance transducers, capitance sensors, and inductance sensors). Another widely used type of sensor generates an electromotive force as a result of influences by the mechanical, acoustic, thermal, electrical, magnetic, optical, or radiation quantity being measured or monitored. This category includes strain gauges, piezoelectric pickups, and photocells.

According to the classification established by the State System of Automation Devices and Components (GSP), sensors are classified as technical means of data collection and primary processing of measurement and monitoring information. Sensors are one of the basic elements in remote-control measuring devices, in telemetry and telesignalization, in regulation and control applications, and in various devices and equipment used in physics, biology, and medicine for monitoring the vital processes of humans, animals, and plants (biological sensors). Sensors are of great importance in the automation of production processes, where they are used to measure and record the density and concentration of solutions, the composition and properties of substances, the dynamic viscosity and fluidity of various mediums, humidity, transparency, color intensity, layer thickness, temperature, elasticity, the concentration of charge carriers, and other parameters characterizing a technical process. Sensors used for such purposes often utilize ultrasonic, radio-frequency, optical, and radiation measuring methods. Random-number pickups are used to simulate real conditions in testing automatic control systems and in computer technology for solving problems by statistical methods.

Specific requirements are made of the output signals and characteristics of sensors used in machines for centralized monitoring and control. The successive connection of large numbers of sensors to the same measuring device requires a high degree of uniformity of the sensors’ output parameters. In some cases the term “sensor” is used to designate the entire transmitting portion of a remote-control mechanical device or automatic device.

[′sen·sər]
(engineering)
The generic name for a device that senses either the absolute value or a change in a physical quantity such as temperature, pressure, flow rate, or pH, or the intensity of light, sound, or radio waves and converts that change into a useful input signal for an information-gathering system; a television camera is therefore a sensor, and a transducer is a special type of sensor. Also known as primary detector; sensing element.
McGraw-Hill Dictionary of Scientific & Technical Terms, 6E, Copyright © 2003 by The McGraw-Hill Companies, Inc.

A device which senses or detects an abnormal ambient condition, such as smoke or unusually high temperature; used to initiate an alarm signal, open a smoke hatch, etc.
McGraw-Hill Dictionary of Architecture and Construction. Copyright © 2003 by McGraw-Hill Companies, Inc.

Equipment that detects, thus allowing an indicator to indicate and/or record, conditions, objects, and activities by means of energy or particles emitted, reflected, or modified by objects. Infrared or radar receivers, thermocouples, and pressure sensors are examples of sensors.
An Illustrated Dictionary of Aviation Copyright © 2005 by The McGraw-Hill Companies, Inc. All rights reserved

(hardware)
An electronic device used to measure a physical quantity such as temperature, pressure or loudness and convert it into an electronic signal of some kind (e.g a voltage). Sensors are normally components of some larger electronic system such as a computer control and/or measurement system.

Analog sensors most often produce a voltage proportional to the measured quantity. The signal must be converted to digital form with a ADC before the CPU can process it.

Digital sensors most often use serial communication such as EIA-232 to return information directly to the controller or computer through a serial port.
This article is provided by FOLDOC - Free Online Dictionary of Computing (foldoc.org)

A device that measures or detects a real-world condition, such as motion, heat or light and converts the condition into an analog or digital representation. An optical sensor detects the intensity or brightness of light, or the intensity of red, green and blue for color systems. See smart sensor, sensor network and mote.
Copyright © 1981-2019 by The Computer Language Company Inc. All Rights reserved. THIS DEFINITION IS FOR PERSONAL USE ONLY. All other reproduction is strictly prohibited without permission from the publisher.