Also found in: Dictionary, Medical.
Related to Carbanions: Carbenes, Free radicals
The following article is from The Great Soviet Encyclopedia (1979). It might be outdated or ideologically biased.

Carbanions are highly reactive and are therefore unstable; they occur as intermediate particles in many organic reactions. For example, they form upon action of strong bases B: (the dots indicate an unshared electron pair) on hydrocarbons, from which any hydrogen atom is readily liberated as a proton:

Thus, sodium trityl, a bright red compound of ionic structure that contains a trityl anion, is formed upon the action of sodium amide on triphenyl methane:

This carbanion is stable because of the distribution of the negative charge among several carbon atoms.

Most organometallic compounds have a covalent structure; however, because of polarization of the metal-carbon bond, excess electron density appears in the carbon atom bonded to the metal:

Ylides, which are bipolar ions that contain a positively charged heteroatom (N, P, As, O, or S) and a negatively charged carbon atom, are a special type of carbanion. An example is pyridine fluorenylylide: 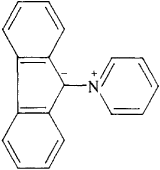 The existence of carbanions as kinetically independent particles has been rigorously proved in a few cases, but the concept of their intermediate formation is frequently used to interpret the mechanism of organic reactions, many of which have great theoretical and practical value (for example, anionic polymerization).

Feedback
Flashcards & Bookmarks ?
Please log in or register to use Flashcards and Bookmarks. You can also log in with
Flashcards ?
My bookmarks ?
+ Add current page to bookmarks
Mentioned in ?
References in periodicals archive ?
This result is consistent with the concept that the stabilization of aliphatic and alicyclic carbanions is largely dependent on anionic hyperconjugation, involving the interaction between the electronic "lone pair" and antibonding C-H and C-C [[sigma].sup.*] orbitals [beta] to the anionic centre [20-24].
The pervasive influence of hyperconjugation: the intrinsic (gas phase) acidities of adamantane, adamantanol, and some of their fluorinated derivatives/Huperkonjugatsiooni koikjale tungiv moju: adamantaani, adamantanooli ja nende moningate fluoroderivaatide gaasifaasilised happelisused
This includes enantioselective synthesis of [Alpha]-hetereoatom stabilized carbanions, additions of chirally-modified organometallics to carbonyl compounds, and enantioselective synthesis of natural products, particularly insect pheromones.
Research at the Guelph-Waterloo Centre for graduate work in chemistry
In the case of the sequential anionic living polymerization of (meth)acrylic monomers, it is generally known that the nucleophilic attack of polystyryl carbanions on the caronyl group of (meth)acrylic monomer is the most usual side reaction, leading to the limited monomer conversion and branch formation.
The effect of a partly hydrolyzed styrene-tert-butyl acrylate diblock copolymer on the properties of poly(2,6-dimethyl-1,4-phenylene ether) (PPE) and polyamide-6 (PA) blends
Khidre, "Overview of the chemical reactivity of phosphonyl carbanions toward some carbonnitrogen systems," Current Organic Chemistry, vol.
Fused imidazopyrazoles: synthetic strategies and medicinal applications
Chapters summarize findings in the areas of reactions of aldehydes and ketones and their derivatives; reactions of carboxylic, phosphoric, and sulfonic acids and their derivatives; radical reactions; oxidation and reduction; carbenes and nitrenes; nucleophilic aromatic substitution; electrophilic aromatic substitution; carbocations; nucleophilic aliphatic substitution; carbanions and electrophilic aliphatic substitutions; elimination reactions; polar addition reactions; cycloaddition reactions; and molecular rearrangements.
Organic reaction mechanisms--2000; an annual survey covering the literature dated December 1999 to November 2000
For example, studies of the superbases and carbanions are often very sensitive to oxidation.
Self-consistent acidity and basicity scales in nonaqueous solvents/Kooskolalised happelisuse ja aluselisuse skaalad mittevesikeskkondades