Many aspects of biochemistry and physiology have to do with the breakdown and synthesis of simple sugars, oligosaccharides, and polysaccharides, and with the transport of sugars across cell membranes and tissues. The breakdown or dissimilation of simple sugars, particularly glucose, is one of the principal sources of energy for living organisms. The dissimilation may be anaerobic, as in fermentations, or aerobic, that is, respiratory. In both types of metabolism, the breakdown is accompanied by the formation of energy-rich bonds, chiefly the pyrophosphate bond of the coenzyme adenosine triphosphate (ATP), which serves as a coupling agent between different metabolic processes. In higher animals, glucose is the carbohydrate constituent of blood, which carries it to the tissues of the body. In higher plants, the disaccharide sucrose is often stored and transported by the tissues. Certain polysaccharides, especially starch and glycogen, are stored as endogenous food reserves in the cells of plants, animals, and micro­organisms. Others, such as cellulose, chitin, and bacterial polysaccharides, serve as structural components of cell walls. As constituents of plant and animal tissues, various carbohydrates become available to those organisms which depend on other living or dead organisms for their source of nutrients. Hence, all naturally occurring carbohydrates can be dissimilated by some animals or microorganisms. See Adenosine triphosphate (ATP), Carbohydrate, Chitin, Glycogen

Certain carbohydrates cannot be used as nutrients by humans. For example, cellulose cannot be digested by humans or other mammals and is a useful food only for those, such as the ruminants, that harbor cellulose-decomposing microorganisms in their digestive tracts. The principal dietary carbohydrates available to humans are the simple sugars glucose and fructose, the disaccharides sucrose and lactose, and the polysaccharides glycogen and starch. Lactose is the carbohydrate constituent of milk and hence one of the main sources of food during infancy. The disaccharides and polysaccharides that cannot be absorbed directly from the intestine are first digested and hydrolyzed by enzymes, glycosidases, secreted into the alimentary canal. See Fructose, Lactose

The simple sugars reach the intestine or are produced there through the digestion of oligosaccharides. They are absorbed by the intestinal mucosa and transported across the tissue into the bloodstream. This process involves the accumulation of sugar against a concentration gradient and requires active metabolism of the mucosal tissue as a source of energy. The sugars are absorbed from the blood by the liver and are stored there as glycogen. The liver glycogen serves as a constant source of glucose in the bloodstream. The mechanisms of transport of sugars across cell membranes and tissues are not yet understood, but they appear to be highly specific for different sugars and to depend on enzymelike components of the cells.

The degradation of monosaccharides may follow one of several types of metabolic pathways. In the phosphorylative pathways, the sugar is first converted to a phosphate ester (phosphorylated) in a reaction with ATP. The phosphorylated sugar is then split into smaller units, either before or after oxidation. In the nonphosphorylative pathways, the sugar is usually oxidized to the corresponding aldonic acid. This may subsequently be broken down either with or without phosphorylation of the intermediate products. Among the principal intermediates in carbohydrate metabolism are glyceraldehyde-3-phosphate and pyruvic acid. The end products of metabolism depend on the organism and, to some extent, on the environmental conditions. Besides cell material the products may include carbon dioxide (CO2), alcohols, organic acids, and hydrogen gas. In the so-called complete oxidations, CO2 is the only excreted end product. In incomplete oxidations, characteristic of the vinegar bacteria and of certain fungi, oxidized end products such as gluconic, ketogluconic, citric, or fumaric acids may accumulate. Organic end products are invariably found in fermentations. The amount of biosynthesis and mechanical work that an organism can do at the expense of a given amount of sugar is many times greater in respiration than in fermentation. See Fermentation, Respiration

The principal phosphorylative pathway involved in fermentations is known as the glycolytic, hexose diphosphate, or Embden-Meyerhof pathway (see illustration). This sequence of reactions is the basis of the lactic acid fermentation of mammalian muscle and of the alcoholic fermentation of yeast. For every molecule of glucose fermented through the glycolytic sequence, two molecules of ATP are used for phosphorylation, while four are produced. Thus, fermentation results in the net gain of two energy-rich phosphate bonds as ATP at the expense of inorganic phosphate esterified. The excess ATP is converted back to ADP and inorganic phosphate through coupled reactions useful to the organism, such as the mechanical work done by the contraction of muscle or biosynthetic reactions associated with growth. See Adenosine diphosphate (ADP), Nicotinamide adenine dinucleotide (NAD) 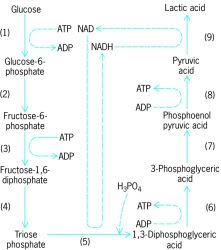 The oxidative or respiratory metabolism of sugars differs in several respects from fermentative dissimilation. First, the oxidative steps, that is, the reoxidation of NADH, are linked to the reduction of molecular oxygen. Second, the pyruvic acid produced through glycolytic or other mechanisms is further oxidized, usually to CO2 and H2O. Third, in most aerobic organisms, alternative pathways either supplement or completely replace the glycolytic sequence of reactions for the oxidation of sugars. Where pyruvic acid appears as a metabolic intermediate, it is generally oxidatively decarboxylated to yield CO2 and the two-carbon acetyl fragment which combines with coenzyme A. The acetyl group is then further oxidized via the Krebs cycle. The principal alternative pathways by which sugars are dissimilated involve the oxidation of glucose-6-phosphate to the lactone of 6-phosphogluconic acid and are known as the hexose monophosphate pathways. See Citric acid cycle

The metabolism of simple sugars other than glucose usually involves the conversion of the sugar to one of the intermediates of the phosphorylative pathways described for glucose metabolism. For example, fructose may be phosphorylated to fructose-6-phosphate, which can then be degraded via the glycolytic pathway or converted to glucose-6-phosphate and oxidized through the hexose monophosphate pathway.

The dissimilation and biosynthesis of the oligosaccharides are effected through the enzymatic cleavage or formation of glycosidic bonds between simple monosaccharide constituents of the complex carbohydrates. The principal types of enzyme which split or synthesize glycosidic bonds are the hydrolases or glycosidases, phosphorylases, and transglycosylases. The enzymes are generally highly specific with respect to the glycosidic portion, or moiety, and the type of linkage of the substrates which they attack. The essential function of all three types of enzymes is the transfer of the glycosyl moiety of the substrate to an appropriate glycosyl acceptor. The phosphorylases catalyze the reversible phosphorolysis of certain disaccharides, polysaccharides, and nucleosides by transferring the glycosyl moieties to inorganic phosphate. The breakdown of glycogen and starch by the enzymes known as amylophophorylases is an example of biologically important phosphorolytic reactions.

the processes of carbohydrate assimilation in organisms. The processes include those for the breakdown of carbohydrates to form intermediate and end products (degradation, dissimilation), the regeneration of carbohydrates from noncarbohydrate compounds (gluconeogenesis), and the conversion of simple carbohydrates into more complex forms. Through the action of digestive hydrolase enzymes (various types of amylases and glycosidases), complex polysaccharides and oligosaccharides are split into the monosaccharides hexose and pentose, which are utilized by the organism. Polysaccharides are enzymatically split also by phosphorylases to form glucose-1-phosphate. The degradation of hexoses entering a cell is accomplished during fermentation or glycolysis, as well as by oxidation during the pentose-phosphate cycle.

Fermentation and glycolysis are anaerobic pathways, that is, pathways carried out in the absence of atmospheric oxygen, for the degradation of monosaccharides; these pathways are completed during fermentation by the formation of ethyl alcohol, higher alcohols, and butyric or propionic acid and during glycolysis and lactic fermentation by the formation of lactic acid. The initial reaction necessary for the subsequent transformation of monosaccharides is that of phosphorylation, which is catalyzed by the enzyme hexokinase. In the anaerobic process, repeated phosphorylation occurs during the next step, terminating in the formation of a diphosphate fructose. This fructose in turn is split by aldolase into two molecules of trióse phosphate, thereby ending the first stage of fermentation or glycolysis. Subsequently, as a result of oxidation-reduction reactions, phosphoglyceric acids and phosphoenolpyruvic acid are formed in succession. These reactions are accompanied by the binding of inorganic phosphate, the transfer of a residue of phosphoric acid to adenosinediphosphate (ADP), and the formation of adenosinetriphosphate (ATP). This set of reactions constitutes the second stage of the anaerobic conversion of carbohydrates, and it plays a significant role in the formation of energy-rich phosphorus compounds.

where DPN denotes the coenzyme diphosphopyridine nucleotide. In glycolysis or lactic fermentation, pyruvate does not undergo anaerobic decarboxylation but rather is reduced to lactic acid by lactic dehydrogenase:

Although this process is not part of carbohydrate metabolism, it may be regarded as the terminal step of metabolism, wherein pyruvate—the product of glycolysis—is oxidated.

The biosynthetic pathways of carbohydrates in living cells include glyconeogenesis and the formation of high-molecular-weight polysaccharides. Glyconeogenesis begins with the carboxylation of pyruvate with the participation of a complex pyruvate carboxylase enzyme system, which leads to the formation of oxalacetic acid; here biotin serves as a coenzyme. This reaction is accelerated by acetyl coenzyme A. Oxalacetic acid, in turn, undergoes decarboxylation in the cytoplasm by the action of the enzyme phosphoenolpyruvate carboxykinase. As a result of these reactions, energy barriers are overcome and phosphoenolpyruvic acid, a source of glucose, may be formed from pyruvate. In photosynthetic bacteria, another possibility is also realized, namely, the reversal of the tricarboxylic acid cycle with the concomitant reduction of three molecules of CO2 and formation of phosphoenolpyruvate. In plants and microorganisms, the glyoxylate cycle plays an important role in gluconeogenesis.

The overall equation for the reactions leading from pyruvate to glucose may be written as follows:

(where ATP is adenosinetriphosphate and GTP is guanosine-tri-phosphate). The synthesis of oligosaccharides and polysaccharides with the participation of various glycosyl transferases is accomplished by the transfer of a glycosyl group from a nucleoside diphosphate sugar to either a monosaccharide or a terminal monosaccharide residue in a polysaccharide or oligosaccharide molecule. Thus, a chain consisting of hexose residues is gradually lengthened. The branching of amylopectin or glycogen as a consequence of the formation of 1,6-linkages is accomplished by the enzyme amylo-(l, 4-l,6)-transglycosylase, which catalyzes the transfer of an end fragment consisting of six or seven glycosyl groups from the end of the major chain to the hydroxyl group of the sixth carbon atom of a glucose residue in one of the chains of the polysaccharide.

[‚kär·bō′hī‚drāt me′tab·ə‚liz·əm]
(biochemistry)
The sum of the biochemical and physiological processes involved in the breakdown and synthesis of simple sugars, oligosaccharides, and polysaccharides and in the transport of sugar across cell membranes.
McGraw-Hill Dictionary of Scientific & Technical Terms, 6E, Copyright © 2003 by The McGraw-Hill Companies, Inc.