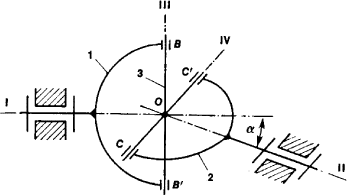 The simple rigid Cardan mechanism is called Hooke’s joint (Figure 1). The axes of rotation (I) and (II) intersect at an angle α with the fixed point O at the center of a circle of radius OB = OB’ = OC = OC’. Thus, for any value of angle ± when 0° ≤ ± < 90°, joints B, B’ and C, C’ in pairs describe the circumference of the same radius in planes perpendicular to axes (I) and (II). When these two conditions are met, the transmission of rotation with various angles a is possible. This property of a Cardan mechanism has brought about its widespread use in various machines—such as aircraft, instruments, lathes (articulated coupling), motor vehicles (Cardan drive), and agricultural machinery—that require a change in the relative position of the shafts transmitting rotation. A drawback of the single universal coupling is the nonuniformity of the speed of rotation of the driven shaft at a constant rate of the driving shaft. The change in the rate of the driven shaft increases with an increase in the angle α 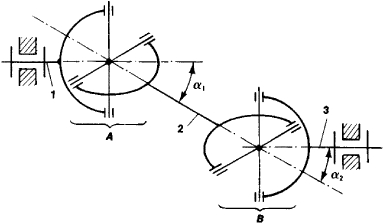 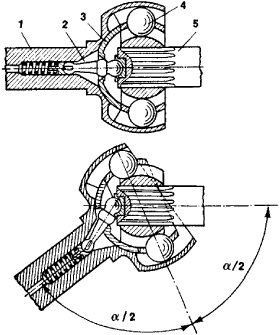 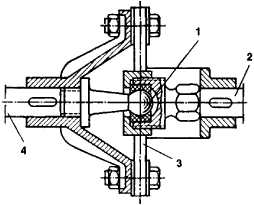