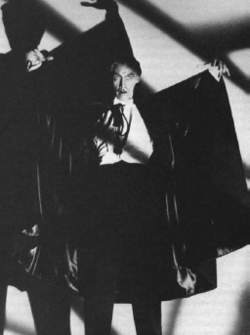 John Carradine as Dracula in House of Frankenstein.

Born Richmond Reed Carradine on February 5, 1905, in New York City, John Carradine first appeared as Dracula in the 1944 movie House of Frankenstein, and frequently recreated the part throughout the rest of his career. Carradine grew up in a educated family. His mother was a surgeon and his father a lawyer who also worked at times as a poet, artist, and Associated Press correspondent in London. Carradine originally planned to become a sculptor and to that end attended the Graphic Art School in Philadelphia. However, inspired by the Shakespearean actor Robert Mitchell, he began to train for the stage.

In 1925 he set out on his own, making a living as a sketch artist. In New Orleans that year he made his stage debut in Camille and then joined a touring Shakespearean company. In 1927 he moved to Hollywood and worked as an actor, in Shakespearean plays when possible. In 1930 he appeared for the first time in a movie, Tol’able David, using the name Peter Richmond. He appeared in his first horror movie, which was also his first motion picture for Universal Pictures, in 1933’s The Invisible Man. In 1935 he signed a long-term contract with 20th Century Fox and changed his stage name to John Carradine. That same year he married Ardanelle Cosner.

Through the 1930s he appeared in a number of notable movies including The Prisoner of Shark Island (1936) and Stagecoach (1939), but he is possibly most remembered for his portrayal of the drunk minister in The Grapes of Wrath (1939). In the 1940s he appeared in the “B” horror movies that had become a staple of Universal Studios’s schedule. Then in 1944 he accepted the role of Dracula in House of Frankenstein, which he agreed to do if he could take his portrayal from Bram Stoker‘s novel rather than the then more famous portrayal of Bela Lugosi. Carradine’s performance somewhat saved the movie and its highly contrived plot and established him as one of the most popular interpreters of the Count.

Meanwhile, Carradine had formed a drama company and laid plans for a career as a Shakespearean actor. His work was greeted with rave reviews, but his plans were blocked by his first wife (whom he had divorced in 1944), who had him thrown in jail for “alimony contempt.” With his new wife, Sonia Sorel, he returned to Hollywood and accepted the offer to assume his vampiric role in House of Dracula. Carradine’s most famous scene was Dracula’s attack upon the heroine as she played “Moonlight Sonata” on the piano. About to claim his victim, he was repulsed by the crucifix hanging around her neck.

Carradine returned to the Dracula role in the 1950s on the stage. He moved even farther from the Lugosi presentation of Dracula, and referred directly to the text of the novel in creating his own makeup, which included white hair and a white mustache. He kept both the opera cape and the evening clothes. Memorable in his performance was a humorous line he added to the script at the end, “If I’m alive, what am I doing here? On the other hand, if I’m dead, why do I have to wee-wee?” In 1957 Carradine became possibly the first television Dracula in a program for NBC’s live “Matinee Theatre.” In 1957, following a divorce two years earlier, Carradine married Doris Rich.

From the 1960s until his death in the 1988, Carradine appeared in numerous “B” films, including a variety of vampire movies. The first of the new vampire movies was Billy the Kid vs. Dracula, an unfortunate marriage of the vampire and western genres. In 1967 Carradine traveled to Mexico for Las Vampiros (The Vampires), a film in which he had little creative input. The only English-speaking person on the set, he learned enough Spanish to deliver the famous line he had added to the play. He followed Las Vampiros with The Blood of Dracula’s Coffin (1968), the first of several movies he made under the direction of Al Abramson. The next came almost immediately, Dracula vs. Frankenstein (also known as The Blood of Frankenstein, 1969). Through the 1970s he appeared in Vampire Men of the Lost Planet (1970), Horror of the Blood Monsters (1971), House of Dracula’s Daughter (1973), Mary Mary Bloody Mary (1975), Nocturna (1978), and The Vampire Hookers (1979). His final appearances in vampire movies were in Doctor Dracula (1980) and The Monster Club (1981). In most of these movies, though by no means all, Carradine played the part of the vampire.

Carradine married Emily Cisneros in 1975, four years after the death of his third wife. He continued to make movies through the 1980s and won an award at the Sitges Film Festival in 1983 as best male actor for his work in House of Long Shadows (1983). He died November 27, 1988, in Milan, Italy, after climbing the 328 steps of the Duomo, the famous cathedral. He collapsed and was taken to the hospital where he died of heart and kidney failure.

Known for his deep, distinctive, classically trained baritone voice, Carradine appeared in an unknown number of films (some estimates go as high as 500). In spite of the negative reaction to his later portrayals of Dracula (and other vampires), he is remembered from his early films and stage work as one of the most important people to take up these roles. Except for Christopher Lee, he played Dracula more than any other actor, and appeared in a starring role in more vampire movies than any actor before or since.