carriage, wheeled vehicle, in modern usage restricted to passenger vehicles that are drawn or pushed, especially by animals. Carriages date from the Bronze Age; early forms included the two-wheeled cart and four-wheeled wagon for transporting goods. An early passenger carriage was the chariot, but Roman road-building activity encouraged the development of other forms. The coach, a closed four-wheeled carriage with two inside seats and an elevated outside seat for the driver, is believed to have been developed in Hungary and to have spread among the royalty and nobility of Europe in the 16th cent. The hackney coach, which was any carriage for hire, was introduced in London c.1605. During the 17th cent. coaches became lighter and less ornate and in England the public stagecoach became common. In the 18th cent., as roads improved, carriage-building became a major industry. The hansom cab, patented by J. A. Hansom in 1834, was a closed carriage with an elevated driver's seat in back. Lord Brougham based the carriage known by his name on the hansom. In the United States the most distinctive type of carriage was a light four-wheeled buggy with open sides and a folding top. The term carriage was also used to refer to railroad passenger cars, which in England began as strings of separate compartments. With the introduction of the automobile, the carriage trade collapsed, except where carriage builders such as the Fisher Company adapted to auto body building.
The Columbia Electronic Encyclopedia™ Copyright © 2022, Columbia University Press. Licensed from Columbia University Press. All rights reserved.

The framing members that support the treads of a staircase. Also called a stringer.
Illustrated Dictionary of Architecture Copyright © 2012, 2002, 1998 by The McGraw-Hill Companies, Inc. All rights reserved
The following article is from The Great Soviet Encyclopedia (1979). It might be outdated or ideologically biased.

a subassembly of a mechanism or machine that supports a number of parts and moves along guides or, less frequently, rotates in bearings. In metalworking machines the carriage is the lower (supporting) part of a slide, which moves along the guides of a bed (in lathes) or traverse (in planers and vertical lathes), or it is a part of a machine table that moves in the guides of a console (in shapers and milling machines). In looms the carriage is a shed-forming mechanism used in the production of finely patterned fabrics and for complex weaving. In typewriters the carriage is a frame with a cylinder for the paper. In bicycles the entire pedal mechanism is called the carriage.

According to contracts of freight carriage, the transportation organization (carrier) is obligated to deliver the freight entrusted to it by the shipper to the point of destination and to turn the shipment over to the party authorized to receive it. The shipper is obligated to pay an established fee for carriage of the freight.

The system for presenting freight for shipping, for delivery by a certain deadline, and for turning freight over to the receiver is regulated by shipping regulations that are ratified by the transportation ministries. (The General Rules for Shipment of Freight by Automotive Transport, approved on July 30, 1971, is an example of such regulations.)

The carrier is liable for property losses and may be required to pay fines, penalties, and compensation for losses if the shipping agreement is not fulfilled, if the freight accepted for carriage is not kept in good condition, or if the deadline for delivery is not met. The carrier is also held responsible if all or part of the baggage accepted for carriage is lost, spoiled, or damaged or if a passenger suffers physical injury or other damage to health. Property liability has also been instituted for the parties concerned in cases of failure to provide means of carriage and failure to present freight for carriage.

Any demand that a client may make is drawn up in the form of a claim against the carrier. If it is rejected or left unanswered for a period of time established by law, the client has the right to bring suit against the carrier in a court or arbitration tribunal. The circumstances that served as grounds for submitting the claim are presented in the form of commercial acts.

a mobile support, bracket, or stand for attaching optical devices and their individual parts to an optical bench.

a subassembly designed to support and shift (mechanically or manually) a tool, such as one used in metal-cutting machine tools. Carriages usually consist of a tool holder and intermediate slides, which guide the tool’s movement. Carriages may be classified by the machining operation (turning or grinding), the type of tool holder (single-tool or turret holder), the mounting on the machine (overhead or horizontal), and the direction and nature of the carriage movement (longitudinal, transverse, or reciprocal). Universal carriages can be shifted in several directions. The solidity and the degree of precision in the motion of a carriage are determined to a large extent by the quality of the machine.

What does it mean when you dream about a carriage?

As a vehicle drawn by an animal, a carriage dream can indicate how we are dealing with our biological drives. Are we in control, or are we having a difficult time controlling the horses?

[′kar·ij]
(engineering)
A device that moves in a predetermined path in a machine and carries some other part, such as a recorder head.
A mechanism designed to hold a paper in the active portion of a printing or typing device, for example, a typewriter carriage.
(graphic arts)
The component in a unitized microform reader or reproduction device that holds the microform.
(mechanical engineering)
A structure on an industrial truck or stacker that supports forks or other attached equipment and travels vertically within the mast.
(ordnance)
Mobile or fixed support for a cannon; sometimes includes the elevating and traversing mechanisms.
McGraw-Hill Dictionary of Scientific & Technical Terms, 6E, Copyright © 2003 by The McGraw-Hill Companies, Inc. 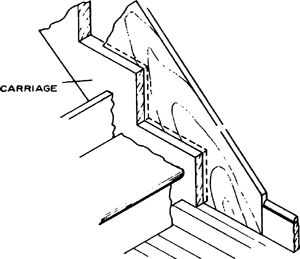 carriage, 1
1. An inclined beam which supports the steps or adds support between the strings of a wooden staircase, usually between the wall and outer string. Also called a carriage piece, horse, roughstring.
2. In theater stage equipment, a counterweight arbor.
3. A movable frame on which some other movable part or object is supported.
McGraw-Hill Dictionary of Architecture and Construction. Copyright © 2003 by McGraw-Hill Companies, Inc.

1. Brit a railway coach for passengers
2. the moving part of a machine that bears another part
Collins Discovery Encyclopedia, 1st edition © HarperCollins Publishers 2005

A typewriter or printer mechanism that holds the platen and controls paper feeding and movement. On earlier typewriters, the carriage moved the platen as each letter was typed. Starting with IBM's Selectric models, the carriage became a stationary part of the unit, the same as is found on dot matrix computer printers. See platen and typewriter.
Copyright © 1981-2019 by The Computer Language Company Inc. All Rights reserved. THIS DEFINITION IS FOR PERSONAL USE ONLY. All other reproduction is strictly prohibited without permission from the publisher.

Feedback
Flashcards & Bookmarks ?
Please log in or register to use Flashcards and Bookmarks. You can also log in with
Flashcards ?
My bookmarks ?
+ Add current page to bookmarks
Mentioned in ?
References in classic literature ?
At last all were seated, the carriage steps were folded and pulled up, the door was shut, somebody was sent for a traveling case, and the countess leaned out and said what she had to say.
View in context
"Sire, I should not wish to make a mistake; is there no other sign by which I may know this carriage?"
View in context
But her reminder that they were in his wife's carriage provoked him to an impulse of retaliation.
View in context
At the second turn the Count stopped the carriage, and requested permission to withdraw, leaving the vehicle at their disposal.
View in context
On entering the carriage, Julia noticed the eye of Antonio fixed on her with peculiar meaning, and she felt that her conduct had been appreciated.--From this time until the day of their arrival at the house of Mr.
View in context
Presently he reached a slight declivity at the foot of which, in a spot sheltered from the enemy's balls, he had stationed the carriage, containing a young woman, the companion of his childhood, the being most dear to him on earth.
View in context
"Lead me into the queen's oratory," said D'Artagnan, "announce to her I am here, and put this parcel, with a well-loaded musket, under the seat of the carriage which is waiting at the foot of the private stair."
View in context
He turned himself sideways to the carriage, and leaned back, with his face thrown up to the sky, and his head hanging down; then recovered himself, fumbled with his cap, and made a bow.
View in context
The road went up and down, and several times the carriage passed over a little bridge beneath which water rushed very fast with a great deal of noise.
View in context
With this recommendation, the person who had accompanied the king in the carriage ascended the flight of steps, at the top of which the governor was awaiting him.
View in context
These new-comers evidently meant mischief with regard to the carriage.
View in context
The old butler who had traveled with the countess, came to the carriage to announce that everything was ready, and the countess got up to go.
View in context