(kärtä`gō), city (1995 est. pop. 31,413), central Costa Rica, capital of Cartago prov. The raising of livestock and the production of coffee are its main industries. Cartago was founded in 1563. It was the political center of Costa Rica until shortly after independence was won from Spain in 1821 and remains a conservative stronghold. It was destroyed by an eruption (1723) of IrazúIrazú
, active volcano, c.11,260 ft (3,430 m) high, central Costa Rica, E of San José. A massive volcano, Irazú erupted in 1723, destroying Cartago, and since then it has erupted at least 20 times.
..... Click the link for more information.  volcano and was severely damaged by earthquakes in 1822, 1841, and 1910. Cartago's principal church is the scene of pilgrimages. 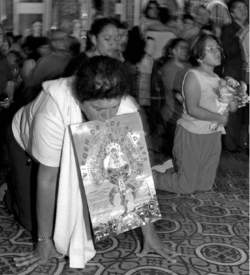 Worshippers gather at the Basilica de la Virgen de los Angeles in Cartago, Costa Rica, the home of a miraculous statue of the Virgin Mary that is a mere three inches tall. AFP/Getty Images.

The national shrine to the Virgin Mary in Costa Rica is not centered on an apparition of the Virgin, as is often the case, but on some unusual occurrences around a statue. In 1635 a young girl named Juana Pereira found a small stone statue of a woman with a child in her arms resting on a rock near a footpath. Thinking the statue would make a nice plaything, she took it home. The next day she found what appeared to be a similar statue at the same spot. She took it home only to discover that the first statue could not be found. This event repeated itself a third time, and she finally took the statue to the local priest. He recognized the statue as a representation of the Virgin and placed it in a chest at the church. It disappeared from the chest, and the priest and girl found it back at the rock.

The priest assumed at this point that the Virgin wished to be at the place where she was initially discovered, and shortly thereafter a small shrine was built to house the statue. Over the next generation veneration of the statue spread, and a chapel was built. In 1652 an association was created to care for the chapel.

The importance of the chapel was its location on the edge of Cartago, then the capital of Costa Rica, in an area where native people, Africans, and people of mixed blood resided, as opposed to the new Spanish ruling elite. In addition, the statue was made of a dark rock.

The status of the statue grew significantly in the eighteenth century when, on two occasions, it was the focus of prayer to protect the people of Cartago from volcanic eruptions (1723) and an epidemic (1737). In 1782 the statue, as the Virgen de los Angeles, was named the patron of Cartago. After the capital was moved to San José, it was named the patron saint of the country. A large church, the Basilica de Nuestra Señora de los Angeles, replaced the chapel in the early twentieth century.

August 2, the anniversary of the statue’s discovery by Juana Pereira, is now a national holiday and a time of pilgrimage to the statue. On August 3, a procession takes the statue to the main church in Cartago, where it remains until the first Sunday in September, when it is returned to its permanent home.

The statue itself is only three inches tall. It is now richly clothed in gold, and only the face of the Virgin and the child are visible. It is displayed within a large, gold monstrance that enlarges its appearance. The small image was solemnly crowned in 1926. Nine years later, Pope Pius XI designated the shrine church as a basilica.

Of additional interest relative to the Virgen de los Angeles, the stone on which the statue was originally discovered is now in the basilica. The stone shows signs of being worn away as thousands of pilgrims pass by and touch it. A spring of water has appeared beneath the stone, and pilgrims may take the water home with them for use in anointing the ill.

a city in western Colombia, in Valle del CaucaDepartment. Population, 64, 800 (1968). Cartago is a station onthe Medellin-Cali railroad line and is the commercial and trans-port center of an agricultural region in the Cauca River valley(coffee, sugarcane, tobacco, bananas, corn, and cattle raising).The city was founded in 1540.