a device for converting cartographic projections. In a mechanical cartographic converter an elastic film on which a projection of the initial material has been inscribed is stretched until the cartographic grids of the material and the original coincide. The converted image is then photographed or copied by hand.

Opticomechanical cartographic converters are used for complex transformations of cartographic projections (an example is the photo converter with a slit device; see Figure 1). The image of the initial material placed on the object surface is projected by a lens onto the picture surface. The image on the picture surface is shifted in direction XX by moving the lens. The initial projection is converted by fixing the scan of the image on photographic paper through the slit. The photographic paper is also shifted in direction YY along the flexible curve. 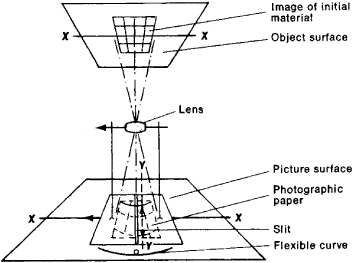 Electronic cartographic converters are being developed. Insuch devices the image produced on the screen of a cathode-raytube changes when there is a change in the voltage on the deflec-tor plates.