representations of the entire surface of the earth’s ellipsoid or some part of it on a plane; produced mainly for the construction of a map.

Scale. Cartographic projections are made on a definite scale. By hypothetically reducing the earth’s ellipsoid by a factor of M— for example, 10, 000, 000—we obtain a geometric model of it, a globe, the representation of which on a plane in actual size gives a map of the surfaces of the ellipsoid. The quantity 1 \M (in this case, 1:10, 000, 000) defines the principal, or general, scale of the map. Because the surfaces of the ellipsoid and sphere cannot be shown on a plane without breaks and folds (they do not belong to the class of developable surfaces), any cartographic projection inherently contains distortions of the length of lines and of angles typical of any map. The basic characteristic of any cartographic projection at any point on it is the particular scale μ. This is a quantity that is the inverse of the ratio of an infinitely small segment ds on the earth’s ellipsoid to its representation do- on the plane: 1/μ, = ds/dσ, where ja depends on the position of the point on the ellipsoid and on the direction of the segment selected. It is clear that μ, min ≤μ, ≤μmax and that equality is possible here only at individual points or along certain lines on the map. Thus, the principal scale of the map describes it only in general, in a certain average sense. The ratio μ/M is called the relative scale or the magnification of a line, and the difference μ/M — 1 is called the distortion of the line. In the analysis of the characteristics of a cartographic projection, the principal scale may be neglected; its numerical value is considered only during computation of the coordinates of points of the cartographic projection. Therefore, M is often taken as equal to 1 (for example, in the theory of distortions).

General information. The purpose of the theory of cartographic projections (mathematical cartography) is the study of all types of distortions of plane representations of the surface of the earth’s ellipsoid and the development of methods for constructing projections in which distortions have a minimum value (in some sense) or a predetermined distribution.

Proceeding from the needs of cartography, the theory of cartographic projections deals with representations of the surface of the earth’s ellipsoid on a plane. Since the earth’s ellipsoid is slightly compressed and its surface deviates slightly from that of a sphere, and also because cartographic projections are needed to draw maps in medium and small scales (M > 1,000, 000), consideration is often limited to representations on a plane of a sphere with radius R whose deviations from the ellipsoid can be neglected or somehow taken into account. Therefore, we then have in mind representations on the plane xOy of a sphere relative to the geographic coordinates ϕ(latitude) and λ (longitude).

The equations of any cartographic projection have the form

The significant upsurge of cartography in the 16th century brought about by the great geographical discoveries led to the creation of a number of new projections; one of them, proposed by G. Mercator, is still used today. In the 17th and 18th centuries, when the widespread organization of topographic surveying began to provide reliable material for the compilation of maps of significant territories, cartographic projections were developed as the basis for topographic maps (the French cartographer R. Bonne; G. D. Cassini) and the most important groups of cartographic projections were studied (J. Lambert, L. Euler, and J. Lagrange).

The development of military cartography and a further increase in the scope of topographic work in the 19th century required a secure mathematical foundation for large-scale maps and the institution of a system of retangular coordinates based on a more suitable cartographic projection. This requirement led to the development by K. Gauss of the fundamental geodetic projection. Finally, in the mid-19th century A. Tissot (France) produced a general theory of distortions of cartographic projections.

Theory of distortions. Distortions in the infinitely small area around any point of a cartographic projection follow certain general rules. At any point on a map in a projection that is not conformal, there are two perpendicular directions that correspond to two perpendicular directions on the surface being represented; these are the cardinal directions of representation. The scales in these directions (cardinal scales) have extreme values: μmax = a and μmin = b. If the meridians and parallels on a map in any projection intersect at right angles, their directions are the cardinal directions for that projection. The distortion of length at the given point of the projection graphically represents the ellipse of distortion, which resembles (and is located similarly to) the representation of an infinitely small circle inscribed around the corresponding point of the surface being depicted. The radii of the ellipse are numerically equal to the particular scales at the given point in the corresponding directions; the semiaxes of the ellipse are equal to the extreme scales, and their directions are cardinal.

The relationship among elements of the ellipse of distortion, the distortions of the cartographic projection, and the partial derivatives of functions (1) is established by the basic formulas of the theory of distortions.

Classification according to position of the pole of the spherical coordinates. The poles of a sphere are special points of geographic coordination, although the sphere does not have any special characteristics at these points. Thus, when mapping areas that have geographic poles, the use of coordinates in which the poles are ordinary points of coordination, rather than geographic coordinates, is sometimes desirable. Therefore, spherical coordinates whose coordinate lines—the verticals (on which the conventional longitude a = const.) and altitude circles (almu-cantars), where the polar distances z = const.—are similar to the geographic meridians and parallels, except that their pole Z0 does not coincide with the geographic pole P0(Figure 1), are used on a sphere. The conversion from the geographic coordinates ϕ and λ of any point on a sphere to its spherical coordinates z and a for a given position of the pole Z0 (ϕo »o) is carried out according to the formulas of spherical trigonometry. Any cartographic projection given by equations (1) is called normal (ϕ0 = π/2). If the same projection of a sphere is computed according to the same formulas (1) but with z and a in place of and A, the projection is called transverse for 0 = 0 and oblique for 0 < ϕ0 < π/2. The use of oblique and transverse projections reduces distortion. Normal (A), transverse (B), and oblique (C) orthographic projections of a sphere (surface of a globe) are shown in Figure 2.

In equal-area (equivalent) projections, areas are preserved; more precisely, the areas of figures on maps made in such projections are proportional to the areas of the corresponding actual figures, and the proportionality constant is inverse to the square of the principal scale of the map. The ellipses of distortion always have the same area but differ in shape and orientation.

When a sphere is represented on a plane the features of confor-mality, equal area, equal distance, and orthodromes are incompatible. The following are used to show distortions at different places in the area represented: (1) ellipses of distortion constructed in various places on the grid or sketch of the map (Figure 3); (2) isokols, or lines of equal distortion value (in Figure 8, C, see the isokols of greatest distortion of angles co and the isokols of the scale of areas P); (3) the representation of certain spherical lines, usually orthodromes (O) and loxodromes (L ), at certain places on the map (see Figures 3, A and 3, B).

The conic projections (Figure 4) are projections in which the parallels are shown by concentric circles and the meridians by straight lines orthogonal to them. In these projections distortion does not depend on longitude. They are especially suitable for territories that extend along parallels. Maps of the entire territory of the USSR are often made in conic orthomorphic and conic equidistant projections. They are also used as geodetic projections.

Pseudoconic projections (Figure 6) are projections in which the parallels are represented by concentric circles, the central meridian is a straight line, and the other meridians are curves. The Bonne equal-area pseudoconic projection is common; it was used for a 3-verst (1:126, 000) map of the European part of Russia in 1847 (1 verst = 1.07 km). 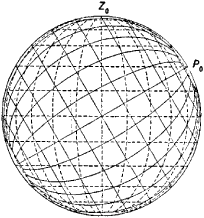 Figure 2. The globe and its orthographic projections 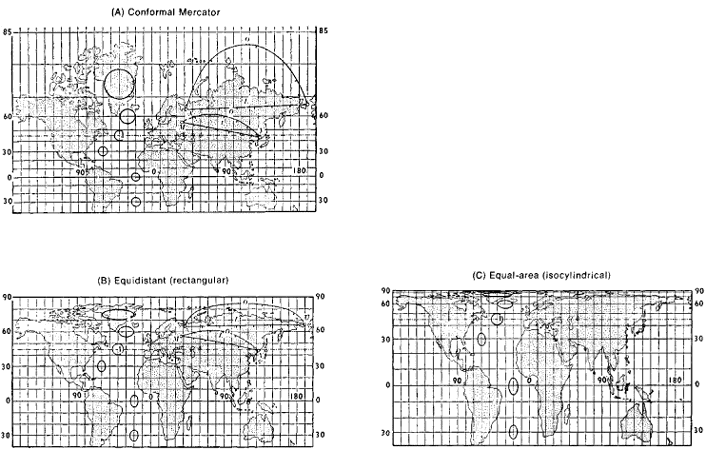 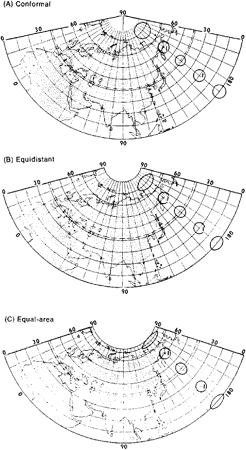 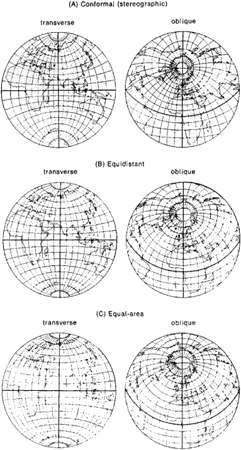 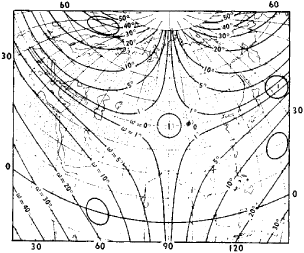 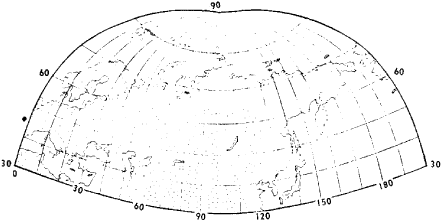 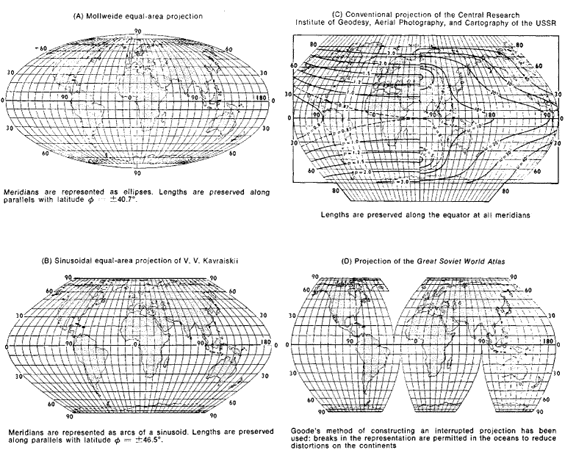 parallels are represented by circles—for example, the conformal Lagrange projections and the Grinten projection).

Cartographic projections are also used in navigation, astronomy, and crystallography. Projections for mapping the moon, the planets, and other celestial bodies are being sought.

Conversion. When considering two cartographic projections given by the corresponding systems of equations x = f1(ϕ, λ), y = f2(ϕ, λ) and X = g1(ϕ, λ), Y = g2(ϕ, λ), one may establish the conversion from one projection to the other by removing ϕ and λ from these equations:

When the type of functions F1 and F2 is concretely determined, these formulas give a general method for obtaining the derivatives of the projections and make up the theoretical basis for all possible methods and technical procedures of map-making. For example, affine and linear fractional transformations are performed by means of cartographic converters. However, more general conversions require the use of new technology, particularly electronic equipment. The problem of building improved converters of cartographic projections is a pressing problem of modern cartography.

Feedback
Flashcards & Bookmarks ?
Please log in or register to use Flashcards and Bookmarks. You can also log in with
Flashcards ?
My bookmarks ?
+ Add current page to bookmarks
Mentioned in ?
References in periodicals archive ?
A third key link to da Vinci's works is a remarkable, but again little known, page from his notebooks containing an intensive exploration of what seem to be all the known cartographic projections of the globe at that time (reproduced in Figure 7).
It is noteworthy that da Vinci's world map has a unique cartographic projection onto 8 spherical-geometry triangles that provide close to isometric projection throughout the globe.
Leonardo da Vinci's world map
Even the non-expert cataloger will be able to understand how to handle such topics as: Background to Title and Other Statements, Dealing with Cartographic Projections, Background to Physical Description, and Background to Content Type.
A new cataloging standard for today's varied resources
In this study, we consider the problem of minimization of a in the class of conic mappings, which are standard official cartographic projections for intermediate and large-scale regions of the Earth surface [9-12] and which are frequently used in the modeling of atmosphere and ocean dynamics in the middle and low latitudes [13-20].
On conformal conic mappings of spherical domains
As over forty pages are devoted to notes and the print size is generous, the text is surprisingly short, but the coverage, whether of exploration, Mackinder, geopolitics, or different cartographic projections, can be readily fleshed out from other works.
The Power of Projections: How Maps Reflect Global Politics and History
Danti continued to show familiarity with the recent critical use of cartographic projections, but expanded the symbolic scope of territorial maps after he arrived in Rome to participate in Gregory XIII's calendrical reform.
The Marvel of Maps: Art, Cartography and Politics in Renaissance Italy