optical systems containing both reflecting surfaces (mirrors) and lenses. In some catadioptric systems the mirrors perform purely structural functions (changing the direction of a light ray, reducing the dimensions of the instrument, and so on) without influencing the quality of the image. The catadioptric condensers of microscopes may serve as an example of such systems. In other cases the mirrors play the primary role in image formation, and the lenses serve chiefly to correct the aberrations introduced by the mirrors. The optical properties of mirrors do not change when the wavelength of the incident light changes (that is, the mirrors are achromatic), and therefore catadioptric systems are used extensively in cases when the optical system must have a long focal distance and a large diameter (the objectives of telescopes, long-focus photographic lenses, and high-resolution geodetic instruments).

Astronomy is one of the principle fields of application of catadioptric systems. The combination of mirrors of different shapes and the use of different combinations of lens compensators have made it possible to develop catadioptric systems with a large angle of view and a high relative aperture (Figure 1, a and b) and to reduce the length of astronomical instruments (Figure l,c).

Figure 1. Optical schemes of astronomical catadioptric systems with lens aberration compensators: (a) superfast objective with large angle of view (up to 30°), used to photograph moving celestial bodies, such as meteors; all aberrations are corrected except curvature of image field; (b) telescope with paraboloidal mirror; coma correction by Lord Rosse’s compensator increases system’s field of view; and (c) system designed by G. G. Sliusarev and V. S. Sokolova with large parabolic mirror and small spherical mirror; all aberrations except distortion are corrected; length of system is much less than its focal distance

Catadioptric systems are used as high-power photographic lenses (having a relative aperture of up to 1:0.8; see Figure 2,1) and as telephoto lenses. These systems have a comparatively small field of view, but their resolution is generally higher than that of refracting objectives having the same characteristics. The field of view can be increased somewhat by constructing the lens after the design in Figure 2,b.

Since the middle of the 20th century catadioptric systems have begun to be used in designing the objectives of microscopes. Typical schemes are presented in Figure 3, a and b. Such objectives are usually interchangeable with refracting objectives but have a number of advantages, especially when investigating rays beyond the visible region of the spectrum (the low residual chromatic aberration of catadioptric systems, which is brought about by the achromatism of the mirrors, makes it possible to photograph in ultraviolet light using visual focusing). 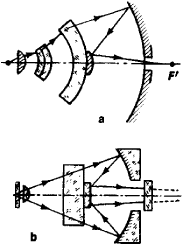 Figure 3. Optical schemes of catadioptric microscope immersion objectives: (a) designed by V. A. Panov and (b) designed by D. S. Volosov

The achromatism and high reflection coefficient of mirrors in a broad spectral range were responsible for the use of catadioptric systems in other devices that operate in the ultraviolet and infrared regions of the spectrum (particularly in spectral devices). The lenses used in such systems are made of special materials (such as quartz, fluorite, and lithium fluoride).

Feedback
Flashcards & Bookmarks ?
Please log in or register to use Flashcards and Bookmarks. You can also log in with
Flashcards ?
My bookmarks ?
+ Add current page to bookmarks
Mentioned in ?
References in periodicals archive ?
More recent examples of catadioptric systems can be found in [37-40].
Araujo, "Estimating parameters of noncentral catadioptric systems using bundle adjustment," Computer Vision and Image Understanding, vol.
Caption: FIGURE 2: Two sample omnidirectional images captured in the same room, from the same position, and using two different catadioptric systems. Caption: FIGURE 3: Projection model of the unit sphere projection.
[44] present a work about the possibility of creating a catadioptric system composed of two mirrors, focusing on the study on how the changes in the geometry of the system are reflected in the final image captured by the camera.
This is advantageous because, thanks to it, it is possible to obtain undistorted perspective images from the scene captured by the catadioptric system [39].
With this aim, the catadioptric system needs to go under a calibration process [46].
A State-of-the-Art Review on Mapping and Localization of Mobile Robots Using Omnidirectional Vision Sensors
This revision includes a new overview chapter on aberrations, a rewritten chapter on automatic lens design, and an expanded chapter on mirrors and catadioptric systems that incorporates a variety of newer systems, some with eccentric pupils.
Lens design fundamentals, 2d ed
The cooler can also be used in Maksutov-Cassegrains and other catadioptric systems. It sells for $129.95 for 8- to 11-inch scopes and $139.95 for 12- to 14-inch.
A cool way to cool down "hot" scopes
For catadioptric systems with parabolic mirror and orthographic camera [xi] = 1.
Method for SLAM Based on Omnidirectional Vision: A Delayed-EKF Approach
The fourth edition adds chapters on third-order aberration theory and calculation, and the design of mirror and catadioptric systems.
Modern optical engineering; the design of optical systems, 4th ed
Choose from a variety of Newtonian, refractor, or catadioptric systems, all of which come with one or more eyepieces and such options as motor drives and slow-motion controls.
Russian-Made Telescopes Galore
While Cave Optical was busier than ever, Schmidt-Cassegrains were on the horizon -- Tom Johnson had developed a method of figuring corrector plates that made these catadioptric systems commercially feasible.
Cave Optical Company