acceleration of a chemical reaction by the action of a catalyst
Collins Discovery Encyclopedia, 1st edition © HarperCollins Publishers 2005
The following article is from The Great Soviet Encyclopedia (1979). It might be outdated or ideologically biased.

a change in the rate of a chemical reaction owing to the presence of substances (catalysts) that enter into the intermediate interactions with the reactants yet regain their original chemical composition after each intermediate interaction cycle. Reactions involving catalysts are known as catalytic reactions. The quantity of reactant that can undergo the transformation in the presence of the specified quantity of catalyst is not limited by any stoichiometric relations and may be quite large. Catalytic reactions differ from induced, or conjugate, reactions, in which one reaction is caused or accelerated (induced) by another and an irreversible transformation of the inductor-substance occurs. Possible changes that take place in the catalyst during catalytic reactions are due to side processes that do not determine the course of catalytic action in any way.

Catalysis is not connected with the change in free energy of the catalyst, and therefore the catalytic action cannot shift the equilibrium position of the chemical reaction. Catalysts accelerate both the forward and the reverse reactions when approaching the state of equilibrium.

The activation energy (E) that is, the difference between the energy of the active complex and that of the original reacting molecules, is a basic factor in determining the rate of chemical transformation. If it is assumed that the reaction does not disturb the equilibrium distribution of energy between the molecules, then the possible formation of the active complex and, consequently, the reaction rate in the first approximation, is proportional to exp (-E/RT), where R is the gas constant and Tis the absolute temperature. From here it follows that the reaction rate increases as E decreases and, owing to the exponential dependence, grows considerably even during a small reduction of E.

Figure 1 shows the change in energy during a reaction without a catalyst (curve 1) and in the presence of a catalyst (curves 2 and 3). Curve 2 with two maxima corresponds to the formation of one intermediate product. 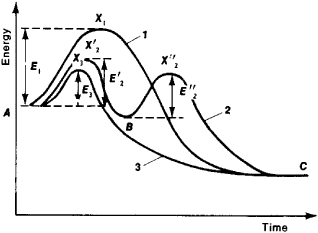 The nature of the intermediate chemical interaction that occurs during catalysis is extremely diverse. Two groups of catalytic processes are generally distinguished: acid-base (heterolytic) and oxidation-reduction (homolytic). An intermediate acid-base interaction between the reactants and the catalysts (for example, proton transfer from the catalyst to the reactants and vice versa) occurs in processes of the first group. In the final stage the proton is shifted in the reverse direction and the catalyst regains its original composition. In catalysis by aprotic acids the interaction is carried out by way of the free electron pair of the reactant. Examples of acid-base catalysis include (1) hydrolysis of esters, which is accelerated by acids; (2) hydration of olefins in the presence of phosphorus-acidic catalysts; (3) isomerization and cracking of hydrocarbons using aluminosilicate catalysts; (4) alkylation; and (5) polymerization. During the course of oxidation-reduction catalysis reactions, the intermediate interaction is associated with the electron transfers between the catalyst and the reactants. This group includes (1) oxidation of sulfur dioxide into trioxide during the preparation of sulfuric acid; (2) oxidation of ammonia into nitric oxide during the preparation of nitric acid; (3) numerous processes involving the partial oxidation of organic compounds, for example, ethylene into ethylene oxide and naphthalene into phthalic anhydride; (4) hydrogenation; (5) dehydrogenation; (6) cyclization and aromatization of hydrocarbons; and (7) decomposition of hydrogen peroxide. Primarily metals of periods IV, V, and VI of the D. I. Mendeleev system, which have an incomplete d electron shell, exhibit oxidationreduction catalytic activity, as do the compounds of these metals and, to a lesser degree, the compounds of elements with an/shell that is being filled (lanthanides and actinides).

The groups discussed above by no means include all the various catalytic reactions known to occur. The nature of the intermediate interaction during catalysis is much more complex and is dependent on all the details of the electron structure of both the reactants and the catalyst. The specific mechanisms of catalytic reactions are diverse and have been firmly established in only a few cases.

Selection of the composition of the catalyst in a specified reaction is a very complex problem and is still primarily resolved empirically. A number of theoretical approaches based on the correlation of individual specific properties of catalysts with their activity have been proposed and developed in the USSR. For example, the multiplet theory of catalysis (first published in 1929) assumes the intermediate interaction of reactants with several atoms on the surface of solid catalysts and gives a controlling importance to the matching of the distances between the atoms in reactant molecules and the parameters for the crystalline structure of the catalyst. Later, this theory was extended by the concept of the necessity of a definite correspondence between the bond energies that split and form in the course of the reaction and the energies of reactant-catalyst bonds, which occur during intermediate interaction. A very widespread concept in the 1950’s pertained to the dependence of catalytic activity of solid catalysts having semiconductor properties on their electrical characteristics, that is, the electron theory of catalysis. According to this theory, it is assumed that the intermediate interaction of the reactants with the catalyst is realized during the participation of conductivity electrons from the solid catalyst and therefore depends on its total electron properties—for example, the destruction of energy zones and local electron levels, the release of electrons, and current carrier concentration. In the case of heterogeneous catalysis, it was generally assumed (first in 1939) that active centers, in the form of edges, angles, or different structural deformations (dislocations) in a standard crystalline structure exist on the surface of solid catalysts. It was also proposed that individually arranged atoms or aggregates of several atoms (ensembles) exhibit specific catalytic properties during application of the catalytically active substance on the inert carrier.

The development of accurate methods of determining the catalyst surface has made it possible to establish that the activity related to the unit surface (specific catalytic activity) is determined by the chemical composition and depends very little on the structural dislocations. The specific catalytic activity of various crystal faces is differentiated several times in certain cases. Deviations in chemical composition (stoichiometric deviation, introduction of impurities, local chemical formations) have a substantial effect on activity.

During the 1960’s the intermediate chemical interaction in heterogeneous catalysis was primarily thought of as local, and as determined by the electron structure of individual atoms or ions of a catalytically active constituent on the catalyst surface, taking into account the effect of the immediate environment. The development of this approach was aided by the discovery (by way of experiment) of a similar effect produced by solid catalysts containing a particular metal during heterogeneous catalysis and by soluble complexes containing the same metal during homogeneous catalysis in solutions. Furthermore, the theories of crystalline and ligand fields, which were applied even earlier in the chemistry of complex compounds, were successfully used. Correlations between the catalytic activity and bond energies of reactants in the presence of a catalyst during intermediate interaction have been established for many classes of catalysts and catalytic reactions, thereby simplifying the selection of catalysts for individual cases.

The first scientific reference to catalysis appeared early in the 19th century. In 1806 the French chemists N. Clement-Desormes and C. Desormes discovered the catalytic action of nitric oxides on the oxidation of sulfurous gas in a chamber process for the preparation of sulfuric acid. In 1811 the Russian chemist K. S. Kirkhgof noticed that dilute acids can induce the conversion of starch into sugar (glucose); in 1814 he established that this reaction can be catalyzed by diastase from barley malt. This was the beginning of research on biological catalysts, that is, enzymes. In 1818 the French chemist L. Thenard determined that many solids exhibit an accelerating effect on the decomposition of hydrogen peroxide solutions, and the British chemist H. Davy discovered the oxidability (on platinum) of alcohol and ether vapors. The German chemist J. Dobereiner established (1822) that hydrogen and oxygen combine on platinum at ordinary temperatures. It was subsequently discovered that a number of other substances also exhibit a markedly high effect on the rate or occurrence of chemical reactions. This led to the isolation of a group of phenomena named by the German chemist E. Mi-cherlich as contact (1833) and by the Swedish chemist J. Ber-zelius as catalytic (1835).

In later years a considerable number of catalytic reactions were discovered; over the last 50 years catalysis has become the leading method of conducting chemical reactions in industry. The use of catalysts enables chemical transformations to be realized at high rates and low temperatures. Most of the industrial catalytic processes would not be realized without catalysts. Selection of catalysts makes it possible to direct the chemical transformation toward the formation of a specified product from a number of possible ones. The application of stereospecific catalysts makes it possible to control the structure of the end products, such as polymers. In the early 20th century the problem of fixation of nitrogen in the air was resolved with the aid of catalysis. Promoted iron and other catalysts have made it possible to surmount the chemical inertness of elemental nitrogen and to effect the synthesis of ammonia. At the same time, a catalytic method was developed for preparing nitric acid by the oxidation of ammonia on platinum wires. Modern techniques used in the production of hydrogen from natural gas are based on catalytic reactions. Catalytic methods also occupy an important position in petroleum refining technology. Hundreds of millions of tons of high-grade motor fuel are produced by way of such catalytic reactions as cracking, hydrocracking, reforming, cyclization, and isomerization of petroleum hydrocarbons. Catalytic methods play a particularly large role in the realization of processes of organic synthesis. The USSR was the first country in the world to develop and effect the production of synthetic rubber based on the conversion of ethyl alcohol into divinyl in the presence of the multicomponent Lebedev oxide catalyst. Catalytic methods are used in the preparation of most of the products of petrochemical synthesis: solvents, aromatic hydrocarbons, monomers for the manufacture of synthetic rubber, synthetic fibers, and other polymer materials. Catalysts are also widely used in polymerization.

Catalysis plays a leading role in the chemical transformations that occur in living systems. The entire complex system of regulation of life processes in organisms is based on catalytic reactions. Biological catalysts, called enzymes, are substances of protein origin containing chemically active groups, often including atoms of transition elements. Enzymes surpass industrial catalysts in certain properties. In the USSR and other countries, extensive research is being carried out on new types of complex synthetic catalysts—complex compounds, organic semiconductors, and polymers characterized by a simpler composition than enzymes but simulating their effect to a certain degree. The science of catalysis has played a fundamental role both in the advancement of the chemical industry and in the discovery of the most important biological mechanisms.

[kə′tal·ə·səs]
(chemistry)
A phenomenon in which a relatively small amount of substance augments the rate of a chemical reaction without itself being consumed.
McGraw-Hill Dictionary of Scientific & Technical Terms, 6E, Copyright © 2003 by The McGraw-Hill Companies, Inc.