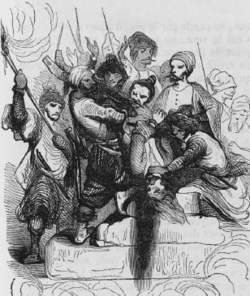 The Cathars (Albigensians) were falsely accused of mistreating their enemies, as this anti-Cathar illustration issued by the Catholic Church depicts.

The Cathars were a secret society of Satanists who sought to destroy the medieval church in France.

The Cathars, also known as the Albigensians, were largely centered in Albi, the town in the French province of Languedoc in which an ecclesiastical Roman Catholic Church council condemned the group as heretics in 1208. Most of the Albigensian communities were first sacked, then burned, along with their records and their libraries, and testimony as to exactly what the Cathars believed was wrung out under extreme torture. Contemporary research now indicates that far from being the evil monsters that Pope Innocent III (c. 1161–1216) decreed should be exterminated, the Cathars were devout, chaste, tolerant Christian humanists who loathed the material excesses of the medieval church. Beliefs similar to theirs can be found in the Gnostic gospels, in the Essenic teachings discovered at Qumran, and in the Egyptian mystery schools. The Cathars called themselves the True Church of God, but they had no fixed, codified religious doctrine. Most of the few manuscripts that survived the flames of the Inquisition were written in Provençal, the old language of southern France, the rest in Latin.

The cultural life of the Albigenses far outshone that of any other locality in the Europe of their day. In manners, morals, and learning, objective historians state, the Albigenses deserved greater respect than the orthodox bishops and clergy. It is now generally conceded that the court of Toulouse was the center of a higher level of civilization than existed anywhere else in Europe at that time.

In the opinion of Pope Innocent III and many of the church hierarchy, the Cathars were teaching the rudiments of witchcraft. Although they centered their faith on Christ, they perceived him as pure spirit that had descended from heaven on the instructions of the God of Good to liberate humankind from the world of matter. According to the Cathars, because Christ was pure spirit, he did not die on the cross and the teachings of the church were false. The Cathars rejected all the Catholic sacraments, and they taught that the God of the Old Testament was the lord of matter, the prince of this world—designations that the Catholic Church reserved for Satan. Not only was the God revered by the church as the Creator really the devil, but the Cathars also instructed their followers that most of the patriarchs and prophets mentioned in the Old Testament were really demons. They also believed that it was Satan who created the material world after his expulsion from heaven when God the Father, taking pity on his once bright star Lucifer, allowed him seven days to see what he might create. The bodies of Adam and Eve were animated by fallen angels and directed by Satan to beget children who would follow the ways of the serpent.

To counter the lust of the flesh inspired by the devil, the Cathars preached chastity, vegetarianism, and nonviolence. They believed in a progressive doctrine of reincarnation, with the spirits of animals evolving into humans. In their view, it was a dualistic universe, with good and evil having equal strength, and they considered their time in the world as a struggle to resist Satan’s power.

In 1208 Innocent III declared the Cathars to be heretical and condemned the citizens of the Albigensian towns of Béziers, Perpignan, Narbonne, Toulouse, and Carcassonne to death as “enemies of the Church.” Simon de Montfort (c. 1160–1218), an accomplished military leader, was appointed to conduct a crusade against fellow Christians, cultured men and women of what is today southern France, whom the pope had deemed a greater threat to Christianity than the Islamic warriors who resisted the Crusaders. Although it took him nearly twenty years of warfare against the beleaguered Albigenses, de Montfort managed to exterminate 100,000 men, women, and children before he himself was killed during the second siege of Toulouse.

In 1244 Montségur, the last center of Albigensian resistance, fell, and hundreds of Cathars were burned at the stake. The headquarters of the Inquisition was now established in the once highly cultured city of Toulouse, and the few Cathars who had managed to escape death during the bloody decades of the crusade that had been launched against them were at the mercy of the relentless witch and heretic hunters.

adherents of a heresy that was widespread in Western Europe (chiefly in Italy, Flanders, and southern France) from the 11th to 13th centuries and which served as a vehicle of protest against feudal oppression for broad strata of the burghers (particularly artisans) and some of the peasants.

Their doctrine, borrowed to a great extent from the Bogomils, was dualistic: an opposition between good (the unseen, spiritual, and only true world, created by God) and evil (the earthly, material world created by Satan). The Cathars’ condemnation of everything earthly and carnal led to extreme asceticism; they rejected marriage, forbade the use of animals for food, and permitted suicide. They did not recognize the church sacraments, veneration of saints, or indulgences, and they exposed the vices of the Catholic clergy. (They considered the pope of Rome Satan’s deputy.) They demanded the liquidation of the church’s landholdings and refused to pay the church tithe. They created their own religious organization at the head of which stood preceptors, the perfect (perfecti), who were bound to lead an ascetic life.

The church, supported by secular power, waged a bitter struggle against the Cathars. The Cathar doctrine was the foundation for the Albigensian heretical movement. The Cathar heresy was almost completely eradicated during the period from 1300 to 1350 as a result of merciless persecution.

Feedback
Flashcards & Bookmarks ?
Please log in or register to use Flashcards and Bookmarks. You can also log in with
Flashcards ?
My bookmarks ?
+ Add current page to bookmarks
Mentioned in ?
References in periodicals archive ?
Cathars in Question may be most useful within the context of teaching sourcing methods and the nature of historical argument.
Cathars in Question
The final leg of this journey took us through the fortified medieval town of Carcassone, a UNESCO World Heritage site that was once a Cathar stronghold, and then to Rennes-le-Chateau, the fabled village of Holy Grail lore, where Magdalene also allegedly preached, and nearby Rennes-les-Bains, home to rejuvenating hot springs and a majestic stone throne known as the seat of Isis that brought more mystical activations as we each took our turn on it.
The south of France with Mary Magdalene and the Cathars
The novel begins with its ending: Leola is writing about her life from her hiding place somewhere in the south of France, where she and other women, some of whom are Cathars, are hiding from the imminent threat of the Christian crusaders.
"El mundo fue un milagro': uses of the past and survival in Rosa Montero's Historia del rey transparente
There's an option to book online at www.mediawales.reader.travel Organised by Omega Holidays plc ABTA No V4782 ATOL No 6081 Carcassonne, Cathar Country and Catalonia October 20, March 28 & April 6, eight days frompounds 599 From Bristol Airport The ramparts of Carcassonne, the mystery of Rennes le Chateau, the surrealism of Dali's Theatre Museum, combined with a visit to modernist Barcelona, and stays in unspoilt locations on the Catalan coast and in a pleasant spa town in the hills of Roussillon, this is a holiday to one of the most scenic parts of the Mediterranean.
READERS HOLIDAYS
Second place may even go to the description of the slaughter in Beziers not only of the persecuted Cathars of Languedoc but of many of their Catholic townspeople.
THE CRUSADES RECONSIDERED
The Cathars of southern France, known as Albigensians after the city of Albi, a stronghold of heresy, were admired and protected by many of the local lords, most notably Count Raymond VI of Toulouse.
Carcassonne falls in the Albigensian crusade: Aug 15 1209
This is, as many signs proudly tell you, Cathar country.
CATHAR COUNTRY; Historic Languedoc-Roussillon is just great for family fun,says PHIL BROWN..
It involves a group of unconnected people who recounted similar stories to Bath psychiatrist Dr Arthur Guirdham about belonging to the Cathars, a religious group who were victimised in the 13th century.
Pick of the Day; New Year's Eve
Moss puts a new spin on the Grail quest, telling the story with female protagonists in parallel story lines in the present and the 13th century, Loaded with information about the Cathars and the Albigensian crusade, this novel enlightens and entertains.
Ancient mysteries
Three very different youngsters in medieval France--a Jewish university student, a shepherd boy who feels chosen to lead the Children's Crusade, and a girl who is one of the few survivors from the massacres of Cathars (a breakaway Christian group hated by the established Church)--each is drawn into the tragic Crusade.
1212: Year of the Journey
Otto Rahn's CRUSADE AGAINST THE GRAIL: THE STRUGGLE BETWEEN THE CATHARS, THE TEMPLARS, AND THE CHURCH OF ROME (1594771359, $16.95) is the book that popularized the legend of the Holy Grail: its first edition appeared in Germany in 1933 and presented the author's own account of his explorations.
Inner Traditions/Healing Arts/Park Street Press
This was a time when the citadel offered protection to the Cathars, a religious sect at odds with the Catholic church.
It's the fort that counts; The Great Escape ADRIAN CAFFERY EXPLORES A MEDIEVAL MASTERPIECE IN 'GRAIL COUNTRY' THAT IS POPULAR WITH FILM STARS AND INSPIRED WALT DISNEY