[′kath‚ōd ′spəd·ə·riŋ]
(electronics)
sputtering
McGraw-Hill Dictionary of Scientific & Technical Terms, 6E, Copyright © 2003 by The McGraw-Hill Companies, Inc.
The following article is from The Great Soviet Encyclopedia (1979). It might be outdated or ideologically biased.

the destruction of the negative electrode (cathode) in a gas discharge as a result of the impact of positive ions. In a broader sense it is the destruction of a solid through bombardment by charged or neutral particles.

On the one hand, cathode sputtering is an undesirable phenomenon that shortens the life of electronic devices; on the other hand, it is of practical use for cleaning surfaces, revealing the structure of a substance (ionic etching), depositing thin films, and producing directional molecular beams. The bombarding ions that penetrate the target produce displacement of its atoms. These displaced atoms in turn can produce new displacements. Some of the atoms reach the surface and pass out of it. Under certain conditions particles may leave the target’s surface in the form of ions. In single crystals conditions are most favorable for particle emission in directions in which the atomic packing density is greatest. Collision chains (focusons), by means of which the energy and momentum of displaced particles are transmitted with the lowest losses, are formed in these directions. The process of ion channeling, which determines the depth of penetration of ions into a target, plays an important role in cathode sputtering. 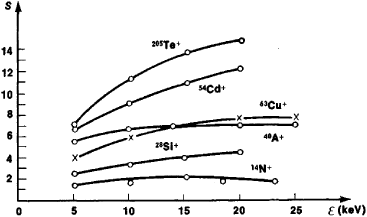 Figure 1. Dependence of sputtering coefficient S for a copper target on energy ε of bombardingions

Cathode sputtcring occurs when the energy of the ions ε is higher than a value ε0, called the cathode sputtering threshold. The value of ε0 ranges from a few to several dozen electron volts. It is characterized quantitatively by the sputtering coefficient S, which is equal to the number of atoms dislodged by one ion. Near the threshold S is very small (10 −5 atoms per ion), but under optimum conditions it may be as high as several dozen. Its value is independent of gas pressure at pressures p < 13.3 newtons per sq m (N/m2), or 0.1 mm of mercury, but when p > 13.3 N/m2, S decreases because of the greater number of particles that settle back onto the surface. The value of S is affected both by the characteristics of the bombarding ions, such as their energy £ (see Figure 1), their mass M (see Figure 2), and 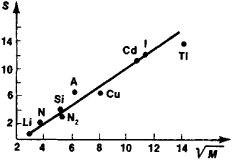 their angle of incidence a on the target (see Figure 3), and by the properties of the substance being sputtered, such as the cleanliness of the surface, the temperature, the crystal structure, and the mass of the target’s atoms. 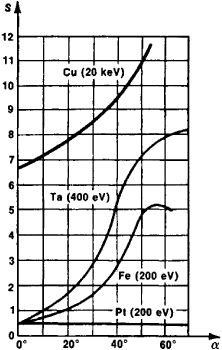 Figure 3. Dependence of sputtering coefficient S on angle of incidence a of ions bombarding the surface of Cu, Ta, Fe, and Pt (the numbers indicate the energy of the ions)