cedar, common name for a number of trees, mostly coniferous evergreens. The true cedars belong to the small genus Cedrus of the family Pinaceae (pine family). All are native to the Old World from the Mediterranean to the Himalayas, although several are cultivated elsewhere as ornamentals, especially the cedar of Lebanon (C. libani), which appears in the Lebanese flag. This tree, native to Asia Minor and North Africa, is famous for the historic groves of the Lebanon Mts., frequently mentioned in the Bible. The wood used in building the Temple and the house of Solomon (1 Kings 5, 6, and 7) may, however, have been that of the deodar cedar (C. deodara), native to the Himalayas. It has fragrant wood, durable and fine grained, and is venerated by the Hindus, who call it Tree of God. The name cedar is used (particularly in North America, where no cedars are native) for other conifers, e.g., the juniper (red cedar), arborvitae (white cedar), and others of the family Cupressaceae (cypress family). Several tropical American trees of the genus Cedrela of the mahogany family are also called cedars. True cedars are classified in the division Pinophyta, class Pinopsida, order Coniferales, family Pinaceae.
The Columbia Electronic Encyclopedia™ Copyright © 2022, Columbia University Press. Licensed from Columbia University Press. All rights reserved. 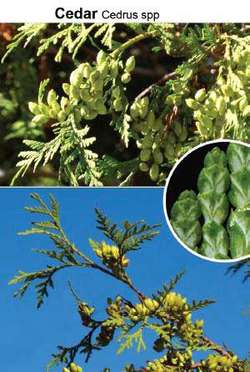 (Cedrus), a genus of coniferous evergreen trees of the family Pinaceae. The trunk is 25–50 m high, with a dark gray, dehiscent, and scaly bark. The crown is spreading and pyramidal or umbrelled (on old trees). The evergreen leaves are acicular, trihedral or tetrahedral, stiff, and spiny; they range in color from dark green and blue-green to silver-gray. The leaves are in fascicles of 30–40 on short shoots (pulvini) or spirally arranged and single on long shoots. The cedar blossoms in the fall. The anther spikelets are individual and surrounded by groups of leaves; the pollen has sacs. The cones are individual, erect, barrel-shaped or ovid, and elongated (length, 5–10 cm; width, 4–6 cm); they mature and fall in the second or third year. The seed-bearing scales are imbricate, appressed, and shaped like broad kidneys. The seeds are resinous, 12–18 mm long, triangular, and winged; they are not edible. The cedar has a surface root system.

Cedars grow on mountains at altitudes of 1,300–3,600 m, forming cedar forests with fir, spruce, pine, oak, and four other species of trees. The Atlas cedar (Cedrus atlantica) is found in the Atlas Mountains of northwest Africa. The cedar of Lebanon (C. libani) grows in Lebanon and Syria and on the Cilician Taurus in Asia Minor. The Cyprian cedar (C. brevifolia) is found on Cyprus; the deodar (C. deodard) in the Western Himalayas. The wood is yellowish or reddish, fragrant, and resistant to fungus and insect damage.

Cedar trees are cultivated in parks. The blue and silver varieties are particularly valuable. In the USSR cedars, most frequently the Atlas and deodar, are cultivated as ornamentals in the Crimea, Caucasus, and southern Middle Asia. The Atlas is 40 m high and has a pyramidal crown of bluish green, grayish silver, or, less commonly, green needles. The needles measure less than 2.5 cm long. The deodar is 50 m high, with a pyramidal crown and light gray-green slender needles. The needles are 2.5–5.0 cm long.

Several species of pine (for example, the nut pines) and the incense cedars of the coniferous genus Libocedrus of the family Cupressaceae are incorrectly called cedars. Six species of incense cedar are found in New Zealand, New Caledonia, and southern Chile; two species, L. chilensis and L. decurens, are cultivated in the Crimea and Transcaucasia. Several other species of trees are sometimes called cedar. An American juniper, Juniperus virginiana, is also known as the eastern-red cedar. The American arborvitae (Thuja occidentalis) is sometimes called the white cedar.

[′sē·dər]
(botany)
The common name for a large number of evergreen trees in the order Pinales having fragrant, durable wood.
McGraw-Hill Dictionary of Scientific & Technical Terms, 6E, Copyright © 2003 by The McGraw-Hill Companies, Inc.

1. any Old World coniferous tree of the genus Cedrus, having spreading branches, needle-like evergreen leaves, and erect barrel-shaped cones: family Pinaceae See also cedar of Lebanon deodar
2. any of various other conifers, such as the red cedars and white cedars
3. the wood of any of these trees
4. any of certain other plants, such as the Spanish cedar
Collins Discovery Encyclopedia, 1st edition © HarperCollins Publishers 2005