The succession of events that culminates in the asexual reproduction of a cell; also known as cell division cycle. In a typical cell cycle, the parent cell doubles its volume, mass, and complement of chromosomes, then sorts its doubled contents to opposite sides of the cell, and finally divides in half to yield two genetically identical offspring. Implicit in the term “cycle” is the idea that division brings the double-sized parent cell back to its original size and chromosome number, and ready to begin another cell cycle. This idea fits well with the behavior of many unicellular organisms, but for multicellular organisms the daughter cells may differ from their parent cell and from each other in terms of size, shape, and differentiation state.

The time required for completion of a eukaryotic cell cycle varies enormously from cell to cell. Embryonic cells that do not need to grow between divisions can complete a cell cycle in as little as 8 min, whereas cycling times of 10–24 h are typical of the most rapidly dividing somatic cells. Many somatic cells divide much less frequently; liver cells divide about once a year, and mature neurons never divide. Such cells may be thought of as temporarily or permanently withdrawing from the cell cycle.

The cell cycle is divided into two main parts: interphase and mitosis (see illustration). During interphase, the cell grows and replicates its chromosomes. Interphase accounts for all but an hour or two of a 24-h cell cycle, and is subdivided into three phases: gap phase 1 (G1), synthesis (S), and gap phase 2 (G2). Interphase is followed by mitosis (nuclear division) and cytokinesis (cell division). This relatively brief part of the cell cycle includes some of the most dramatic events in cell biology. 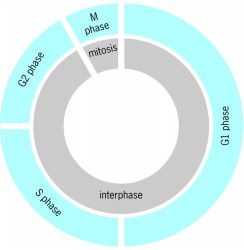 Phases of the eukaryotic cell cycle

Gap phase 1 begins at the completion of mitosis and cytokinesis and lasts until the beginning of S phase. This phase is generally the longest of the four cell cycle phases and is quite variable in length. During this phase, the cell chooses either to replicate its deoxyribonucleic acid (DNA) or to exit the cell cycle and enter a quiescent state (the G0 phase).

Replication of the chromosomes is restricted to one specific portion of interphase, called S phase (DNA synthesis phase), which typically lasts about 6 h. In mammalian cells, the start of S phase—the actual initiation of DNA synthesis—takes place several hours after the cell has committed to carrying out DNA synthesis. During S phase, each chromosome replicates exactly once to form a pair of physically linked sister chromatids. In animal cells, a pair of centrioles is also duplicated during S phase. See Chromosome, Genetics

The portion of interphase that follows S phase is called gap phase 2. Some cells can exit the cell cycle from G2 phase, just as they can from G1 phase.

M phase includes the overlapping processes of mitosis and cytokinesis. Mitosis is divided into five stages: prophase, prometaphase, metaphase, anaphase, and telophase. Cytokinesis usually begins during anaphase and ends at a point after the completion of mitosis. At the end of cytokinesis, the parent cell has formed its two G1 phase progeny and the cell is ready to repeat the cycle. See Cytokinesis, Mitosis

The network of proteins that regulate DNA synthesis (G1/S), mitotic entry (G1/M), and mitotic exit (the transition from mitotic metaphase to anaphase and then out of mitosis) appears to be well conserved throughout eukaryotic evolution. At the heart of these cell cycle transtions is the periodic activation and inactivation of cyclin-dependent protein kinases. In addition, in multicellular eukaryotes, pathways regulating entry into and exit from the cell cycle entrain these central cyclin-dependent kinases to extrinsic signals.

[′sel ‚sī·kəl]
(cell and molecular biology)
In eukaryotic cells, the cycle of events consisting of cell division, including mitosis and cytokinesis, and interphase.
McGraw-Hill Dictionary of Scientific & Technical Terms, 6E, Copyright © 2003 by The McGraw-Hill Companies, Inc.

Feedback
Flashcards & Bookmarks ?
Please log in or register to use Flashcards and Bookmarks. You can also log in with
Flashcards ?
My bookmarks ?
+ Add current page to bookmarks
Mentioned in ?
References in periodicals archive ?
To assess cell proliferation and the effects of tangeretin, levels of important cell cycle proteins, such as cyclinD1, cyclinA, and the cell cycle inhibitor protein p27kip1, were determined at both the gene and protein levels.
Tangeretin has anti-asthmatic effects via regulating PI3K and Notch signaling and modulating Th1/Th2/ Th17 cytokine balance in neonatal asthmatic mice
5-FU is known to block DNA synthesis by the inhibition of thymidylate synthase (TS), which is regulated by cell cycle proteins controlled by phosphorylation [1].
DTNQ-Pro, a mimetic dipeptide, sensitizes human colon cancer cells to 5-fluorouracil treatment
Shoelch et al18 analyzed expression of cell cycle proteins (p53, Rb, p21, p27, Ki-67, Cyclin D1) in premalignant and malignant oral lesions.
IMMUNOHISTOCHEMICAL EXPRESSION OF PROTEIN p53 IN ORAL EPITHELIAL DYSPLASIA AND ORAL SQUAMOUS CELL CARCINOMA
We propose that the AhR-CDK2 complex functions as a scaffold for additional cell cycle proteins such as cyclin E.
The aryl hydrocarbon receptor forms a complex with cyclin-dependent kinase-2 as a function of cell cycle