Cells are divided into several compartments, each with a characteristic structure, biochemical composition, and function (see illustration). These compartments are called organelles. They are delimited by membranes composed of phospholipid bilayers and a number of proteins specialized for each type of organelle. All eukaryotic cells have a nucleus surrounded by a nuclear envelope, and a plasma membrane that borders the whole cell. Most eukaryotic cells also have endoplasmic reticulum, a Golgi apparatus, lysosomes, mitochondria, and peroxisomes. Plant cells have chloroplasts for photosynthesis in addition to the organelles that both they and animal cells possess. These organelles are suspended in a gellike cytoplasmic matrix composed of three types of protein polymers called actin filaments, microtubules, and intermediate filaments. In addition to holding the cell together, the actin filaments and microtubules act as tracks for several different types of motor proteins that are responsible for cell motility and organelle movements within the cytoplasm. 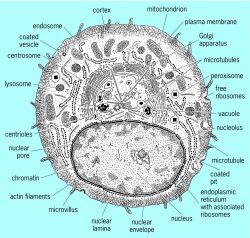 A major challenge in the field of cell biology is to learn how each organelle and the cytoplasmic matrix are assembled and distributed in the cytoplasm. This is a very complex process since cells consist of more than 2000 different protein molecules together with a large number of lipids, polysaccharides, and nucleic acids, including both deoxyribonucleic acid (DNA) and many different types of ribonucleic acid (RNA). See Nucleic acid

The cell must possess enough information to specify which molecules are to be associated in a specific compartment, to route the appropriate groups of molecules to their compartments, and then to position each type of component appropriately in the cell. As a result of intense research on each of these topics, a number of specific chemical reactions that contribute to organizing cells are now recognized, but even more important, a small number of general principles that explain these complex processes of life can be appreciated.

Normal cells regulate the production and degradation of all of their constituent molecules so that the right balance of molecules is present at any given time. The genes stored in nuclear DNA are duplicated precisely once per cell cycle. The supply of each of thousands of proteins is usually regulated at the level of the genes at the time of biosynthesis and by the rate of degradation. These proteins serve as enzymes that determine the rate of synthesis of themselves as well as of other cellular components such as nucleic acids, carbohydrates, and lipids. Each of these processes is regulated by molecular feedback loops to assure the proper levels of each cellular constituent. See Cell cycle, Cell metabolism

A large majority of cellular components are generated by the self-assembly of their constituent molecules. Self-assembly means that the information required for molecules to bind together in the proper orientation is contained in the molecules themselves. Some examples include the binding of histones to DNA, the formation of bilayers from phospholipids, and the polymerization of actin molecules into filaments. The molecules are usually brought together by diffusion. The energy required to hold them together derives from the exclusion of water from their complementary surfaces as well as from the formation of ionic bonds and hydrogen bonds. The variety of molecular structures found in proteins allows each type to self-assemble specifically, only with their correct partner molecules.

After biosynthesis, proteins and nucleic acids are routed to their proper cellular compartment by specific recognition signals consisting of parts of the molecule or, in the case of some proteins, by sugar side chains. These signals are recognized by compartment-specific receptors that guide the molecules to the correct compartment. For example, proteins destined for lysosomes have a specific sugar side chain added in the Golgi apparatus that guides them to lysosomes. Similarly, proteins destined for the nucleus all contain short sequences of amino acids that target the proteins for uptake by the nucleus. These so-called nuclear recognition sequences most likely bind to specific receptors associated with the nuclear pores, the channels through the nuclear envelope that connect the nucleus with the cytoplasm.

Most molecules move to their correct compartment by the process of diffusion down concentration gradients, but organelles generally require transport systems composed of microtubules or actin filaments together with specific motor proteins to position them correctly in the cytoplasm. For example, a protein molecule destined to be part of a mitochondrion will diffuse from the site of biosynthesis through the cytoplasm to a mitochondrion, where it will bind to a receptor that guides its incorporation into the mitochondrion. On the other hand, the mitochondrion itself is too large to diffuse through the network of protein fibers in the cytoplasmic matrix, and so it must be pulled through the matrix by a motor protein that moves along microtubules to the correct place in the cell.

Some cellular components, such as ribosomes and the filaments in the cytoplasmic matrix, assemble afresh from their constituent molecules, but all organelles composed of membranes form only by the growth and division of preexisting organelles. The reason that these organelles require precursors is that biological membranes composed of phospholipids can grow only by expansion of preexisting bilayers. As a consequence, organelles such as mitochondria and the endoplasmic reticulum are inherited maternally starting from the egg and expanding into every cell in the body by continued growth and partition into both daughter cells at every cell division. Other membrane-bound organelles, such as lysosomes, form by budding off the Golgi apparatus.

Many of the individual self-assembly reactions required for normal cell growth can be reproduced in the test tube, but the cell is the only place known where the entire range of reactions, including biosynthesis, targeting, and assembly, can go to completion. Thus, cells are such a special environment that the chain of life has required an unbroken lineage of cells stretching from all living cells back through their ancestors to the earliest forms of life. This requirement for cellular continuity explains why extinction is an irreversible process.

Feedback
Flashcards & Bookmarks ?
Please log in or register to use Flashcards and Bookmarks. You can also log in with
Flashcards ?
My bookmarks ?
+ Add current page to bookmarks
Mentioned in ?
References in periodicals archive ?
Schroeder likes the Cellmould process because of the fine, uniform cell structure. All Cellmould process set tings are made from the Unilog B6 machine control and are stored with the machine parameters for the mold.
Making parts lightweight & strong with new technologies
Results suggested that for regular cell structure, the preferable particle size should be [less than]100 [[micro]meter]; and that catalyst (and possibly surfactant) concentration formulation adjustments may be necessary to achieve equivalent cell structures and open-cell content to the virgin foam.
Manufacture and use of pulverized flexible polyester polyurethane foam particles
While the tensile modulus was unaffected, tensile strength increased 50% with a finer cell structure. Effects on flexural properties were smaller and the trend was less clear.
New light on how to optimize properties of microcellular foams
Characterization of the foamed samples was accomplished using scanning electron microscope (SEM) micrographs to estimate an average cell size assuming a uniform cell structure, randomly distributed cells, and a planer cross section intersecting a single layer of cells.
A microcellular processing study of poly(ethylene terephthalate) in the amorphous and semicrystalline states, part II, Cell growth and process design
Developed by Reedy International Corp., Keyport, N.J., Raz-85 rimming agent reportedly offers high gas yield at low use levels and uniform cell structure. Applications include footwear, building/construction, and automotive parts.
Foaming agent for PE, PS, PVC, elastomers
Actifoam has a closed cell structure, so it cannot absorb any moisture.
Fire-resistant foam rubber
Researchers are now looking at various catalysts and surfactants that can further optimize DS 1154 foams, and early studies have demonstrated that fine cell structure and good initial K-factor can be achieved without a surfactant.
Fine-tuning insulation foams: thermal insulation has become 'eco-friendly,' but now the challenge is to optimize economics, processing, and performance
The cell structure is defined by the linkage of the open areas (open cell) or by the discrete individual nature of the sponge structure openings (closed cell).
New technology to produce silicone sponge without chemical blowing agents or VOCs
Compared with some fluorocarbon, hydrocarbon, or other liquid physical foaming agents, Cylacell reportedly can show improved cell structure, lighter foam densities, and sometimes higher flame retardancy and smoke suppression.
Blowing agents
A characteristic feature of the Actifoam foam rubber is its closed cell structure, so that it does not absorb any moisture.
Fire retardant rubber. (Materials)
The researchers say their finding helps illuminate the origins of our own cell structure and eliminates a fundamental difference between two of the most basic groups of organisms, prokaryotes (bacteria and blue-green algae) and eukaryotes (plants, animals, and protozoans).
Bacterial cells reveal skeletal structures
Park says the patent-pending technology creates a homogenous one-phase polymer/gas solution that improves cell structure, void fraction, and surface finish of structural foam parts.
New approaches to structural foam and overmolding at SPI conference