(sē`fēĭd), class of variable stars that brighten and dim in an extremely regular fashion. The periods of the fluctuations (the time to complete one cycle from bright to dim and back to bright) last several days, although they range from 1 to 50 days. These stars are important because the period of a Cepheid depends on its intrinsic brightness, or absolute magnitudemagnitude,
in astronomy, measure of the brightness of a star or other celestial object. The stars cataloged by Ptolemy (2d cent. A.D.), all visible with the unaided eye, were ranked on a brightness scale such that the brightest stars were of 1st magnitude and the dimmest stars
..... Click the link for more information. , in a known way: the brighter the star, the longer its period. All Cepheid variables with the same period have nearly the same intrinsic brightness, but their apparent brightnesses differ because they are at different distances. By observing a Cepheid's period, one can determine how bright it actually is. By comparing this intrinsic brightness to how bright it appears to be, one can determine the star's distance. Thus Cepheids are important indicators of interstellar and intergalactic distances, and they have been called the "yardsticks of the universe." The Cepheid class takes its name from Delta Cephei, the first such star discovered in 1784. Cepheids are yellow supergiant stars, and their fluctuations in luminosity result from an actual physical pulsation, with attendant changes in surface temperature and size. The stars are hottest and brightest when expanding at maximum rate midway between their largest and smallest size. The period-luminosity relation was discovered by Henrietta Leavitt and Harlow Shapley by studying the many Cepheids in the Magellanic Clouds, the two closest galaxies; these stars are all almost equally distant. It was found that the brighter variables had the longer periods. The absolute magnitude of a few Cepheids is required to infer absolute, rather than merely relative, distances. These absolute magnitudes were measured by a statistical study of the proper motions of Cepheids within our own galaxy. In the 1950s a second class of Cepheids with different period-luminosity relations was found, leading to a dramatic doubling of estimated cosmological distances. The Hubble Space TelescopeHubble Space Telescope
(HST), the first large optical orbiting observatory. Built from 1978 to 1990 at a cost of $1.5 billion, the HST (named for astronomer E. P. Hubble) was expected to provide the clearest view yet obtained of the universe from a position some 350 mi (560 km)
..... Click the link for more information.  will permit the observation of Cepheids in more distant galaxies, giving a more accurate picture of the size and age of the universe.
The Columbia Electronic Encyclopedia™ Copyright © 2013, Columbia University Press. Licensed from Columbia University Press. All rights reserved. www.cc.columbia.edu/cu/cup/ 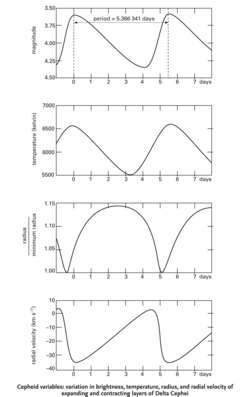 A large and important group of very luminous yellow supergiants that are pulsating variables with periods mainly in the range 1–50 days. Over 700 are known in our galaxy and several thousand in the Local Group. There are two categories: classical Cepheids (or type I Cepheids) are massive young population I objects found in spiral arms on the galactic plane; the less common type II Cepheids (also known as W Virginis stars) are much older and less massive population II objects found in the galactic center and halo, especially in globular clusters, and are thus similar in distribution to RR Lyrae stars. The classical Cepheids are about 1.5–2 magnitudes more luminous than type II Cepheids of the same period. The luminosity variations of both categories are continuous and extremely regular so that the periods can be measured very accurately. Characteristic periods are 5–10 days (classical) and 12–30 days (type II). The amplitudes are typically 0.5–2 in magnitude in visual light; the fluctuation is more marked at blue than at red and infrared wavelengths. The two types are best distinguished by analysis of their spectra, the older type II Cepheids having a much lower abundance of metals.

The prototype of the classical Cepheids is Delta Cephei, discovered 1784. The changes in brightness were found in the 1890s to be accompanied by and principally caused by changes in stellar temperature and also by changes in radius (see illustration). This was later explained in terms of pulsations in the outer layers of the stars that appear at a late evolutionary state (see pulsating variables); according to theory, the pulsations die down as the star expands and its surface cools.

The relation between period of pulsation and average brightness of Cepheid variables was discovered during 1908–12 by Henrietta Leavitt. Leavitt was studying Cepheids in the Small Magellanic Cloud, which were thus all at about the same distance. She recognized that the relation between their period and their average apparent magnitude was equivalent to a relation between period and average absolute magnitude or luminosity (see distance modulus). An independent determination of the distance of a Cepheid of known period would lead to the graphical relation between period and luminosity. It was quickly realized by Shapley that this period-luminosity relation was an invaluable tool for measurements of distance out to the nearest galaxies and thus for studying the structure of our own galaxy and of the Universe (see distance determination). The refurbished Hubble Space Telescope can study classical Cepheids in galaxies as far away as the Virgo cluster (about 15 megaparsecs). Much work has been done to establish the graph of period versus absolute magnitude, mainly involving independent measurements of the distances or luminosities of Cepheids. Baade and Kukarkin were consequently able to demonstrate in the 1950s the existence of the two distinct categories of Cepheids, having separate but parallel period-luminosity relations.

Feedback
Flashcards & Bookmarks ?
Please log in or register to use Flashcards and Bookmarks. You can also log in with
Flashcards ?
My bookmarks ?
+ Add current page to bookmarks
Mentioned in ?
References in periodicals archive ?
Another nice feature about Cepheid Variables is that astronomers already have over 100 years of photographic and other data they can search for any signs that an ETI is signaling their presence by causing the star to brighten in artificial signal patterns not found in nature.
New galactic watering holes
This is important because Polaris A is a Cepheid variable star.
ARCHIVE: Good time to spot dazzling Saturn; Astronomical notes for February by Gill Pilfold of the Birmingham Astronomical Society
The American astronomer Henrietta Swan Leavitt (1868-1921) was interested in Cepheid variables and studied a number of them in the Magellanic Clouds, two large groups of stars that lie beyond the Milky Way (see 1678).
Cepheid variables
Cepheid variables hold a place among the stars most valued by professional astronomers.
The inconstant star: the joys of observing variable stars are predictably wonderful
The five stars are Cepheid variables, whose brightness fluctuates regularly.
Light shed on galaxy's far side: 'variable stars' could help map Milky Way's dark matter
Scientists have known since the early 20th century that the familiar star was part of a pulsating class known as Cepheid variables; its variations were suspected as early as the mid-1800s.
North Star getting brighter
An important new field is the discovery of Cepheid variables in the spiral arms of the Milky Way galaxy.
Ten years of the IRSF and the future
Not until 1912 did the importance of Cepheid variables begin to dawn on astronomers.
Pulsing stars in Cepheus: check in on these happening stars, both famous and obscure
Traditionally, astronomers have exploited the standard candle potential of a particular class of stars known as Cepheid variables. Cepheids periodically brighten and dim on a regular schedule, with the timing depending on their intrinsic average brightness.
Cosmic question mark: the Planck mission's data put a kink in precision cosmology
This galaxy is of further interest to astronomers because its relative proximity allows them to study a wide range of astronomical objects within it, including stellar nurseries, dust clouds, and pulsating stars called Cepheid variables, which astronomers use as distance markers in the Universe [2].
A spiral picture-perfect galaxy!
Classical Cepheid variables are aging, massive stars trying to avoid gravitational collapse.
Milky Way: Cepheids map galaxy & beyond
Classical Cepheid Variables, usually called just Cepheids, are unstable stars that are larger and much brighter than the Sun.
Scientists solve mystery of pulsating star