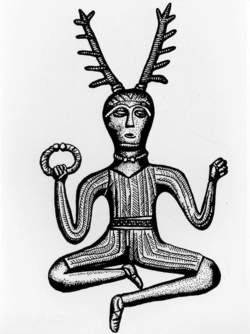 The name of the great pagan deity, representing winter and the hunt, depending upon the country in which he was worshiped. Names were recorded from early times in the Near East, but in western Europe there were no written records until Roman times. The Romans named the god Cernunnos, meaning "The Horned One." In some areas this has become Kernunnos, in others it has been shortened from Cernunnos to Cerne. In English it was Herne, the Hunter.

In the north of Gaul his image was found carved on an altar stone (now in the Cluny Museum, Paris) discovered under the cathedral of Notre Dame. The figure is similar to the Paleolithic painting of the Sorcerer (see Cave Art) in that it is a bearded human male head with the antlers of a stag.

Herne has long been recognized as the spectral figure who, accompanied by his hounds, ranges over Windsor Great Park at the full of the moon. French and German folklore contains references to a similar figure in the French Fontainebleau and the German Black Forest. Kernunnos is the name by which Gardnerian Witches refer to the Horned God.

Generally considered to be a representation of Cernunnos, a great white figure is cut into the chalk hillside at Cerne Abbas, in Wiltshire, England, and displays a fully erect penis as a sign of his potency.

Feedback
Flashcards & Bookmarks ?
Please log in or register to use Flashcards and Bookmarks. You can also log in with
Flashcards ?
My bookmarks ?
+ Add current page to bookmarks
Mentioned in ?
References in periodicals archive ?
Cerner officials said the layoffs will occur in the Kansas City area and across the country.
Cerner To Fire 255 More Employees As Part Of Transformation
Summary: Bengaluru (Karnataka) [India] August 14(ANI/BusinessWire India): Embassy Group, India's leading real estate developer and Cerner Corporation, a global health platform and innovation company, have created a consortium of corporates and NGOs to enhance the health and hygiene conditions of 62 Government Schools in Bengaluru.
Embassy and Cerner join with corporate and NGOs to implement holistic Health and Hygiene initiatives in 62 government schools
Cerner Corporation has announced the development of the Cerner Learning Health Network to help clinicians more easily and efficiently gain health insights and guide care.
Cerner, Duke Clinical Research Institute launch solution for clinical research
WUTH has worked hard over the past few years to implement a wide portfolio of Cerner solutions across the organisation and maximise the functionality of their Electronic Patient Record (EPR), powered by Cerner Millennium(r).
Hospital tech skills earn 'Wired' tribute
Summary: Cerner, a global healthcare technology company, will take part at Arab Health Exhibition and Congress 2019, which will be held …
Cerner to participate at Arab Health Exhibition and Congress 2019
Culver City, CA, October 04, 2018 --(PR.com)-- GeBBS Healthcare Solutions will attend and exhibit at the Cerner Health Conference (CHC) 2018, an annual conference on the latest innovations in health care and IT.
GeBBS Healthcare Solutions Will Join Health Care Leaders from Across the Globe at Cerner Health Conference 2018
deployed integrated electronic health record (EHR) systems from Cerner to
Mubadala Healthpoint upgrades HIS from Cerner
A federal judge has approved a $4.5 million settlement in a class-action suit against health information tech giant Cerner, brought by employees who alleged the company violated laws governing overtime compensation.<br />U.S.
Cerner to pay $4.5 million to settle overtime claims
Memorial Hospital is implementing a new electronic medical records system called Cerner, that it says will improve quality, safety and processes for the care we provide to the community.
Memorial Hospital prepares to debut electronic records system
Al Jalila Children's Specialty Hospital announced on Thursday an agreement to form a health IT strategic partnership with Children's National Health System, which is an extension of The Bear Institute for Health Innovation, a Children's National collaboration with Cerner Corporation.
Al Jalila Children's and Children's National reports launch of international health information technology agreement
The new app also follows nuclear medicine procedures defined in the Cerner system and documentation from order entry until completion of the report.
UAE Ministry of Health & Prevention Uses Cerner Millennium App in Nuclear Medicine