Challengers of the Unknown 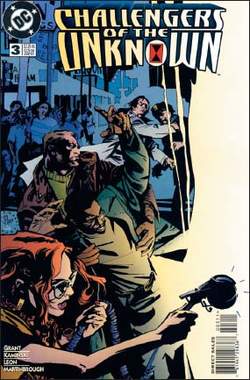 Challengers of the Unknown

Although still published in the twenty-first century, amongst the many thousands of superheroes vying for comic shelf space, the Challengers of the Unknown enjoyed their heyday during the Silver Age of comics (1956–1969). Indeed, after the Flash, Challengers of the Unknown was the second significant superhero creation of this era. After the cancellation of the Justice Society of America in All Star Comics in 1951, the newsstands did not carry superhero teams for much of the 1950s, until writer Dave Wood and artist Jack Kirby revived the concept in DC Comics’ Showcase #6, in early 1957. In an origin sequence that lasts all of two pages, Wood and Kirby revealed how four adventurers on their way to a radio show narrowly avoid death when their airplane is struck by lightning. Climbing from the wreckage, the group decides that since they are living on borrowed time they might as well take whatever risks the world can throw at them and literally “challenge the unknown.” As motivations go it was perilously shallow, but nevertheless one page later they were a team and already hot on the heels of their first challenge.

The Challenger lineup included Professor Haley, the thinker of the group; pug-nosed wrestler Rocky Davis; ginger-haired daredevil Red Ryan; and jet pilot Ace Morgan. The group soon added an occasional fifth member, plucky June Robbins, whose main role was to be captured by assorted wrongdoers. After four issues of Showcase and eight of their own title, Kirby left for Marvel Comics, but by then he had set the pattern for the team’s career. Issue after issue featured the intrepid team taking on an endless parade of aliens, monsters, magicians, robots, and all manner of miscreants from deepest antiquity to the furthest-flung futures. By 1959, the purple-jumpsuited band had mysteriously acquired their own secret hideaway in the Rockies, complete with their own jail and a fleet of planes, helicopters, and cars. They also collected a cadre of arch-enemies, led by the moustached Multi-Man, who gradually grew a large bald head and pointed ears—as supervillains are wont to do—as well as an ever-expanding range of deadly powers. As the 1960s progressed, the prison in Challengers’ Mountain filled up with the motliest group of evildoers in comics, including Volcano Man, Brainex, and the truly horrifying Spongeman. Somewhere along the line they lost the constantly imperiled June but gained Cosmo the superpet.

And what an adaptable superteam the Challengers were. In the late 1960s, DC discovered horror in a big way, and to cash in on the trend, the Challengers began to investigate the mysterious, and the giant aliens were replaced by ghosts and ghouls. A June look-alike, Corrinna Stark, briefly joined the group, but their heyday was over and the comic was canceled in 1970. A few years later they were back in a short-lived revival that mixed horror and science fiction, presumably going for a crossover market that didn’t really exist.

After a very lean spell in the 1980s, the group returned for a couple of startling revamps in the mid-1990s, the first of which saw Challengers’ Mountain transformed into a sort of theme park, complete with its own visitors’ village. It seems that the group had decided to cash in on their celebrity status by courting the tourist dollar, a plan that was rather undermined when a mysterious villain blew up their hideaway, which then plummeted onto the village below killing the visitors. Understandably upset by this, the foursome split up and all got a bit peculiar, but thankfully they pulled themselves together again just in time to save the world as usual. For the final Challengers series of 1997, the original team were dumped altogether in favor of a new band of heroes who investigated alien sightings and paranormal phenomena in a transparent attempt to hit the X-Files market. Despite some of the comic’s finest writing and artwork, the revamp failed to find an audience—but it’s always only a matter of time before the Fab Four ride the next trend and return to the shelves—as they did in the much-anticipated period piece The New Frontier, a retro epic by writer-artist Darwyn Cooke (2004) and Howard Chaykin’s 2004-2005 miniseries, collected in trade paperback as Challengers of the Unknown: Stolen Moments, Borrowed Time. —DAR

Feedback
Flashcards & Bookmarks ?
Please log in or register to use Flashcards and Bookmarks. You can also log in with
Flashcards ?
My bookmarks ?
+ Add current page to bookmarks
Mentioned in ?
References in periodicals archive ?
There are Action Comics, DC and Marvel and lesser-known titles including Blackhawk, Challengers Of The Unknown, Atom, Doom Patrol, Tales Of Suspense, Mystery In Space and Strange Tales.
Rare first edition of The X-Men in super sale
There were also multiple jokes about the Challengers of the Unknown. No other superhero movie can give you that.
Ranking the superhero movies of 2018
Loeb ended up not on Superman or Batman, but on a revival of the 1950s series "Challengers of the Unknown."
Hero worship: film, TV talents jump at chance to write their favorites