an X-ray line spectrum that results from electron transitions from outer orbits to inner shells in an atom. The wavelengths of characteristic line spectra range from 10–2 to 50 nm and, in accordance with Moseley’s law, depend on the atomic number of the element. Characteristic line spectra do not exhibit the periodic regularities observed in optical spectra, because the structure of the inner electron shells is similar for all elements. 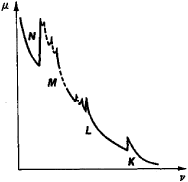 Figure 1. Plot of absorption factor μ versus radiation frequency v for Pt; the K-, L-, M-, and N-series of the X-ray absorption spectrum are shown

Characteristic line spectra are produced when atoms are excited by X-ray photons or accelerated electrons. Upon such excitation, an inner-shell electron is ejected—for example, from the K-shell of the atom—and a vacancy occurs which is filled when an electron is transferred from the L-shell, the M-shell, or a higher-lying shell. Such an electron transfer is accompanied by the emission of an X-ray photon with a specific frequency. The set of lines produced upon electron transitions from higher-lying shells to, for example, the K-shell or the L-shell is called the L-series or the L-series, respectively. The lines within a series are customarily denoted by subscripts, such as α, β and γ. For example, the line corresponding to the transition L → K is denoted Kα (seeX-RAY SPECTRA). The discreteness inherent in characteristic X-ray emission spectra is also manifested in X-ray absorption spectra (see Figure 1).

Characteristic line spectra are used in studies of the structure of materials (seeX-RAY DIFFRACTION ANALYSIS, X-RAY DIFFRACTIONANALYSIS OF MATERIALS, and X-RAY TOPOGRAPHY) and in X-ray spectrochemical analysis.