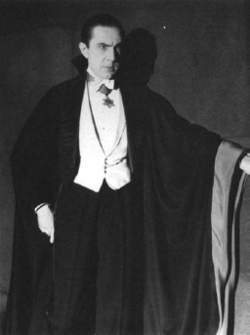 Prominent fangs are a common characteristic of vampires, as shown here in a scene from the film Grave of the Vampire.

Throughout history, vampires have been known by their defining characteristics. Vampires were known to be dead humans who returned from the grave and attacked and sucked the blood of the living as a means of sustaining themselves. The idea of the vampire came to the attention of both the scholarly community and the public in the West because of reports of such creatures in Eastern Europe in the seventeenth and eighteenth centuries. The vampire was seen as a prominent character in the folklore of people from Greece and Turkey in the south to Germany and Russia in the north. The descriptions of vampires in these countries set the image of vampires for the debates about their existence in the eighteenth century. The descriptions of the vampire from Greece and among the southern Slavs became the basis of the development of the literary vampire of the nineteenth century. Bram Stoker, the author of Dracula (1897), drew heavily upon earlier vampire stories and the accounts of vampires in Transylvania and Romania. By the end of the nineteenth century and through the twentieth century, using a definition of the vampire drawn from European folklore and mythology, ethnographers and anthropologists began to recognize the existence of analogous beings in the folklore and mythology of other cultures around the world. While these entities from Asian, African, and other cultures rarely conformed entirely to the Eastern European vampire, they shared significant characteristics and could rightly be termed vampires or at least vampirelike entities.

The Modern Vampire: The vampire has become an easily recognizable character in Western popular culture. As defined by recent novels and motion pictures and as pictured in comic books and on greeting cards, vampires have several key attributes. Vampires are like “normal” human beings in most respects and are thus able to live more or less comfortably in modern society. They are different, however, in that they possess a pair of fangs, tend to dress in formal wear with an opera cape, have a pale complexion, sleep in coffins, are associated with bats, and only come out at night. Their fangs are used to bite people on the neck and suck blood, the substance from which they are nourished. Fangs have become the single most recognizable feature of a male or female vampire, immediately identifying the vampire character to an audience and signaling immediate danger to the prospective victim.

In addition, vampires are basically creatures of the night, and during the day they enter a coma-like vampire sleep. They have red eyes and are cold to the touch. They may not be able to enter a room until invited. In addition, vampires possess some unusual “supernatural” attributes. They have great strength, they can fly (or at least levitate), they possess a level of hypnotic power (thus forcing the compliance of victims or causing the forgetfulness of the vampire’s presence), they have acute night vision, and they can undergo a transformation into a variety of animals (usually a bat or possibly a wolf). Vampires avoid garlic, sunlight, sacred symbols such as the cross (the crucifix) and holy water, and they may need to sleep on their native soil. They may be killed by a wooden stake thrust in their heart, or by fire. While the stereotype has been challenged in recent decades, a disproportionate number of vampires were drawn from European nobility. They were suave and cultured and readily welcomed into almost any social context. The most recognizable vampire is, of course, Dracula. He was preceded by Lord Ruthven and Countess Carmilla Karnstein. More recently Barnabas Collins, of an aristocratic American family, and Lestat de Lioncourt, born of the French lesser nobility, have reinforced popular images of the vampire.

Folkloric Vampires: The vampire was not always so described. Folkloric vampires appeared in numerous forms as demonic creatures. The Malaysian penanggalan, for example, was pictured as a severed head with entrails dangling down. The Indian goddess Kali had a hideous form and was often shown dancing on corpses with fangs protruding from her bloodied lips. However, most commonly the vampire appeared as the corpse of a person recently deceased. It could be recognized by its dress in burial clothes and could be identified by someone who had known them in life and understood that they were deceased and should not be walking around the town. As often as not, the vampire would never be seen, but its presence would be detected by the effects of its action, usually the wasting away and dying of people from unknown causes or the unusual and unexpected deaths of livestock.

Vampires, if seen, generally appeared to the people closest to them. In some cases, especially among the Gypsies and southern Slavs, they would return to engage in sexual relations with a former spouse or lover; in most other cases, they would launch a personal attack on family members, friends, or local livestock. Often the vampire would assume a new existence, something that approached normal life. In Malaysia, for example, the langsuyar assumed the role of a wife and could bear and raise children. She would usually be detected by some chance event during the course of her life. In Eastern Europe, primarily male vampires were reported to have ventured far from home, where they were not known, and continued their life as before their death, even to the point of marrying and fathering children.

The vampire of folklore had some supernatural attributes above and beyond the mobility one generally does not expect of the dead. It could change form and appear as a host of different animals, from a wolf to a moth. Interestingly, the bat was rarely reported as a vampiric form. Some people reported vampires with flying ability, especially in Oriental cultures, but flying or levitation was not prominent among Eastern European vampires.

The original vampires, those described in the folklore and mythology of the world’s people, exist as an evil entity within a complex understanding of the world by a particular ethnic group. Thus they would assume characteristics drawn from that group’s culture and fitting that group’s particular need. Given the variety of vampirelike creatures, both demons and revenants, reported from cultures around the world, almost any characteristic reported of a vampire would be true of one or more such entities.

The Literary Vampire: At the beginning of the nineteenth century, the vampire became the focus of a set of writers, primarily in France and the United Kingdom. In their hands, the folkloric vampire, almost exclusively in its Eastern and Southern European form, was transformed into a gothic villain. While retaining many of the characteristics from the reports of vampires that had filtered into Western Europe in the previous century, writers were quite selective in their choice of acceptable attributes. In the process of creating a literary character, they also added attributes that had no correlation in the folklore literature. Lord Ruthven, the character of the original vampire story written by John Polidori, was of noble birth.