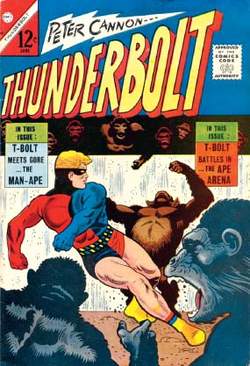 An unauthorized song magazine sent its publisher to “sing-sing.” Such is the origin of Charlton Publications, the Derby, Connecticut, outfit known for everything from crossword puzzle periodicals to superhero comic books.

In the early 1930s, Italian immigrant John Santangelo, a bricklayer, was encouraged by a girlfriend to produce a magazine that printed the lyrics to popular songs. His effort landed him behind bars for copyright infringement. In jail, he got a crash course in copyright law, courtesy of fellow inmate Edward Levy, a disbarred lawyer, and the two joined forces upon their release to start a legitimate publishing house, Charlton. They legally obtained the rights to print song lyrics, and in 1945 launched their first magazine—Hit Parader—a huge success that became the cornerstone of a line of music titles. Charlton entered the comics business in 1946, mimicking the then-popular market trends of funny animals, science fiction, horror, and crime series.

Santangelo’s frugality is legend. Charlton—or Capital Distributing Company, its official name— sliced its production costs by headquartering its editorial, production, distribution, and printing divisions in one plant (Charlton at one time even owned a paper mill). The publisher also paid the lowest page rates in the publishing field, even feeding a few bucks to prisoners for contributions.

This gift for parsimony helped Charlton stay alive during a mid-1950s comic book market crash. It absorbed properties from other publishers, including Fox Features Syndicate, from which Charlton obtained its first superhero series, Blue Beetle, which the company issued briefly during this era before cancellation. Charlton also published the funny-animal superhero comic Atomic Mouse, beginning in 1953.

Hurricane Diane nearly decimated Charlton’s facilities on August 18, 1955, dumping eleven inches of rain on Derby in the course of a day and sending a surge of flood waters into the building. Some employees narrowly escaped, but managed to salvage the printing press during their hasty exodus. Comics inventory, artwork, and reams of paper did not fare as well. “All of the comic books were turned into papier-mache,” remembered former Charlton and DC Comics editor/artist Dick Giordano in his biography, Dick Giordano: Changing Comics, One Day at a Time (2003).

Charlton became the third comic book publisher to release superhero comics during the industry’s Silver Age (1956–1969), following DC and Archie Comics’ lead. Charlton’s nuclear hero, Captain Atom, was first seen in Space Adventures #33 (1960). His stint there did not last long, but he was resurrected in the mid-1960s (along with Blue Beetle), as a gadget-wielding, high-tech crime fighter. Soon, Charlton’s two superheroes were joined by some not-so-super friends.

“I always preferred heroes who could do things that we supposedly would be able to do,” revealed Giordano, who was tapped to edit the Charlton superhero titles. He and his creative teams opted for heroes with skills and talents, not superpowers (discounting the preexisting Captain Atom), which he called Charlton’s “Action Heroes.” Steve Ditko, the original artist of Marvel Comics’ The Amazing Spider-Man, drew Blue Beetle, Captain Atom, and the faceless hero the Question, who appeared as the backup feature in Beetle. Other Action Heroes included: Pete “PAM” Morisi’s Peter Cannon-Thunderbolt, who relied upon his “powers of the mind”; the Peacemaker, who loved tranquility so much he was willing to fight for it; Nightshade, “Darling of Darkness,” the occasional partner of, and backup series in, Captain Atom; the iron-fisted Sarge Steel, drawn by editor Giordano; and martial artist Judomaster.

Tightfisted Charlton did not market its Action Heroes during this extremely competitive time for superhero comics, and many titles never made it into the distribution web, with never-opened bundles remaining on delivery trucks and then being returned to the company. The Action Heroes titles were canceled after roughly two years. Giordano is favorably remembered by the writers and artists who produced the Action Heroes titles— Denny O’Neil, Jim Aparo, Joe Gill, Roy Thomas, and others—and believes that his uncharacteristic superhero comics would have performed well if Charlton had supported them.

In the 1970s, Charlton made a few additional forays into superhero publishing. The company licensed stalwarts from the King Features Syndicate and published comic books starring space adventurer Flash Gordon and the jungle hero the Phantom. Underdog, based on the animated television cartoon featuring a canine do-gooder who gains powers from popping energy pills, appeared in ten issues of his own Charlton series from 1970 to 1972. Also receiving a ten-issue run was E-Man, a lighthearted superhero created by Nick Cuti and Joe Staton in 1973. E-Man was a ball of sentient energy that came to Earth, took human form, and became a superhero who could shoot energy bolts from his fingertips and transform himself into any shape he wanted. His girlfriend, exotic dancer Nova Kane, later became a superheroine herself, known simply as Nova. Although the Charlton E-Man series lasted only ten issues, First Comics revived the series in 1983.

The 1980s also brought improvements in the quality of comics production, and the industry’s growing reliance upon the “direct market” (selling preordered titles to specialty outlets) began to squeeze Charlton out of business. Giordano had since become the managing editor, then the editorial director, of DC Comics. DC executive Paul Levitz purchased the rights to the Action Heroes as a “gift” for Giordano in 1983; beginning with Crisis on Infinite Earths #1 (1985), DC infused Charlton’s characters into its universe, with Blue Beetle, Captain Atom, and The Question receiving monthly titles. The Charlton characters have continued to appear in the DC universe ever since, and E-Man has continued to appear from time to time at different comics companies, including one-shots by Cuti and Staton in 2006 and 2007.

Writer Alan Moore originally wanted to use the Action Heroes as the stars of his twelve-issue series Watchmen (1986–1987), but was encouraged by Giordano to create original heroes instead. Nonetheless, Moore partly based the main superheroes in Watchmen on Charlton heroes: the Comedian on Peacemaker, Dr. Manhattan on Captain Atom, the Nite Owls on the two Blue Beetles, Ozymandias on Peter Cannon, Rorschach on the Question, and Silk Spectre on Nightshade. After a few difficult final years of publishing reprints of its old horror series, and yet failing to penetrate the changing distribution network, Charlton Comics went out of business in 1986.

Thanks to his influence on Watchmen’s Rorschach, perhaps the Charlton hero with the biggest impact on contemporary comics is the Question. Created by writer/artist Steve Ditko in Blue Beetle #1 (June 1967), the Question was really television newsman Vic Sage, who disguised himself with a featureless face mask to combat crime. As with his character Mr. A, Ditko used the Question to express the moral philosophy of Objectivist thinker Ayn Rand; Moore’s Rorschach is a more extreme variation on the Question.

In DC’s series 52 (2006–2007), the original Question dies and his protégé, former Gotham City policewoman Renee Montoya, becomes the new Question. The final issue of 52 reveals that a version of Ditko’s original Question still exists on the parallel Earth known as Earth-4. The original Question, eerily voiced by Jeffrey Combs (of the film Re-Animator), appeared in numerous episodes of the animated series Justice League Unlimited. He also appears in an episode of the animated series Batman: The Brave and the Bold. —ME & PS

Feedback
Flashcards & Bookmarks ?
Please log in or register to use Flashcards and Bookmarks. You can also log in with
Flashcards ?
My bookmarks ?
+ Add current page to bookmarks
Mentioned in ?
References in periodicals archive ?
ALAN PARDEW'S Charlton heroes moved a step closer to Premiership safety last night with a hard-fought point.
Football: THE GRIT ESCAPE! BARCLAYS PREMIERSHIP Charlton grind out another point to take small step towards Premiership safety Charlton 0 Reading 0