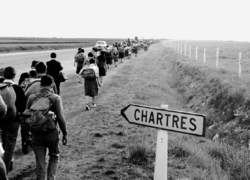 Pilgrims make their way to Chartres, France, a holy place to Pagans and Christians alike. The cathedral at Chartres contains a shirt said to have been worn by Mary when she gave birth to Jesus. Getty Images.

The town of Chartres, southwest of Paris, is known internationally for its cathedral, considered an exemplar of thirteenth-century gothic architecture. That such a fine building should be erected in a relatively small town was the result of the town’s having become a prominent center of the evolving devotion to the Virgin Mary in Western Catholicism.

Even prior to the arrival of Christianity in the area, the high ground upon which the cathedral was built had been the site of Pagan worship. For many centuries, Autricum, as Chartres was called in ancient times, was the center of a Gallic people, the Carnutes. On the high ground, a well was located where local priests, the Druids, practiced their divination. Christianity was present in France from the second century and permeated the region over the next centuries. Clovis I, the king, converted at the end of the fourth century. By the sixth century, Christian worship had pushed the Pagans from the high ground at Chartres.

Chartres became a pilgrimage site as the ninth century came to a close. At this time the city’s church was given a piece of cloth that was purportedly a shirt once belonging to the Virgin Mary. As stories gathered around the cloth, it was further asserted that the cloth was from the shirt worn by Mary when she was giving birth to Jesus. It is generally called the Veil of the Virgin. As the story goes, it was given by Mary to a widow and eventually found its way to Constantinople, the capital of the Byzantine Empire. The Byzantine emperor gave it to Charlemagne (768–814). Charlemagne’s grandson, Charles the Bald (823–877), gave it to the church at Chartres in 876. The cloth was housed in an underground crypt, along with a statue of the Virgin to which couples hoping to bear children made their request known.

In the twelfth century, veneration of the Virgin Mary took a step forward with the likes of Bernard of Clairvaux (1090–1153), who asserted Mary’s role as an intercessor for Christians with her son. The enthusiasm for the Virgin provided the context in which the townspeople decided to build a cathedral. On June 10, 1194, after years of work and the outlay of their money, the new cathedral was destroyed in flames. Several people, including the guardians of the Veil, were trapped inside. Only when the fire was put out was it discovered that the people and the cloth had been safe in the underground crypt. The decision to rebuild came quickly.

The new cathedral took several generations to complete, even with the assistance of people across France and from other countries. Several different architects worked on the building, which reflects a variety of styles. The two spires at the front corners are completely different in appearance. Among the architectural features of the cathedral are its large rose windows, the one in the north carrying images from the Old Testament, and the one in the south depicting the apocalypse from the New Testament. Placed in the floor was an eleven-circuit labyrinth. The labyrinth was meant to be walked by those visiting the cathedral either as an act of penance (on one’s knees) or as a symbolic pilgrimage. In the latter case, it could substitute for a pilgrimage to the Holy Land—a journey possible to only a small minority during the Middle Ages. The Chartres labyrinth is the only complete large labyrinth to survive from that era.

In addition to the Marian intentions of the pilgrims, the Druid well survived, and it maintained its fame as a source of healing. Many people, therefore, came to Chartres seeking a cure for their illnesses. Already a powerful sacred site in the eyes of believers, over the centuries after the new cathedral was completed, it sacredness was enhanced by the addition of more relics. Several martyrs were buried inside its walls. In the thirteenth century, the count of Blois donated a relic claimed to have belonged to Saint Anne, the Virgin Mary’s mother.

Pilgrimages to Chartres were commonplace until the French Revolution. Among the many anti-religious acts of the Revolution, the church was vandalized, the statue of the Virgin in the crypt burned, and numerous relics destroyed. Most damaging was the removal of the lead that covered the roof, which was ripped off, melted, and taken away. It was not until 1836 that a restoration project was initiated, although it efforts were temporarily blocked by another fire, the worst since 1194. Fortunately, the cathedral was spared major damage during the two world wars.

Today, Chartres is once again a major religious pilgrimage site, although pilgrims must now compete with an equal number of tourists who visit the structure for architectural or other secular reasons. The building has also become the focus of significant occult speculation. Much of the art integrated into the building featured Pagan, magical, and astrological imagery, spurring speculation that Chartres was once home to Paganism (the veneration of the Virgin being a slightly disguised worship of the mother goddess) or that the building’s architecture was an embodiment of medieval occult thinking.

While both Protestants and skeptics have withdrawn any belief in the relics housed at Chartres or in the veneration of the Virgin, millions of conservative Roman Catholics still look upon Chartres as an especially holy place. Among the modern activities sanctioned by the church is the walking pilgrimage from Notre Dame Cathedral to Chartres, a journey of some 70 miles.

Feedback
Flashcards & Bookmarks ?
Please log in or register to use Flashcards and Bookmarks. You can also log in with
Flashcards ?
My bookmarks ?
+ Add current page to bookmarks
Mentioned in ?
References in periodicals archive ?
INSPIRED The Shepherds Dene labyrinth is an exact copy of the famous one on the floor of Chartres Cathedral
Follow in ancient footsteps for labyrinthine tranquillity
Chartres cathedral sits on one hill and the student youth hostel sits on another.
Secret Book Written in the Dirt: Jean Valentine's Lucy: A Poem
Along with easy-to-understand descriptions of materials and processes, each chapter provides a few key examples, usually drawn from those works that are best known in the field--the illuminations in Les tres riches heures du Duc de Berry, the frescos of Giotto, the mosaics of Ravenna's San Vitale, the stained glass of Chartres Cathedral, the Bayeux Tapestry, and so on.
Janetta Rebold Benton: Materials, Methods, and Masterpieces of Medieval Art
He applies techniques of investigation and argument used by Caviness (2) and others (T A Heslop, P Binski, A Kostler) to the integrated 'whole' of Chartres cathedral. He treats the cathedral as an object in itself--not the reflection of a text or the outcome of scholastic argument--'which constitutes as well as embodies, discursive practices'.
The four modes of seeing, approaches to medieval imagery in honour of Madeline Harrison Caviness Eds: Evelyn Staudiger Lane, Elizabeth Carson Pastan, Ellen M Shortell
Some buildings seem like dreams of the philosophers: the Chrysler Building, Chartres Cathedral. And then there is the dream-building, that great and final place where the humanist can live forever bathed in the glory of Man.
Shelf life
Chartres Cathedral remains one of France's greatest architectural monuments, a surviving testimony to the skills, imagination and vigour or her mediaeval craftsmen and architects.
THE WORLD OF PAPERBACKS
Its circular route is similar to a floor design in Chartres Cathedral that pilgrims used to follow, sometimes on their knees as penance, piety or meditation.
Step right into the landscape
Gothic churches were dismissed as a futile "fight against the forces of gravity." Chartres Cathedral was a "sentimental" vestige of the past and St.
Postmodern pews
For example, regarding the presence of artisans and merchants in the Infancy Cycle lancet, he raises questions of whether their appearance is due to local circumstance, as Jane Williams claims for a similar case at Chartres Cathedral, or to some other reason for which textual evidence is now lacking.
Picturing the Celestial City: The Medieval Stained Glass of Beauvais Cathedral
This reviewer wishes that the word 'iconic', like 'fantastic', would be given a rest: they are being badly mis- and over-used, and when he saw 'iconic' (in relation to Chartres Cathedral) on the wrapper of this book under review, Ins heart sank.
Universe of Stone: Chartres Cathedral and the Triumph of the Medieval Mind
The chief aim of Universe of Stone, a wide-ranging and excellently illustrated book on the building of Chartres Cathedral, is to establish that the age of reason and science has its roots in the twelfth century, two or three centuries before the generally accepted period.
Universe of Stone: Chartres Cathedral and the Origins of Order
Among the most famous is the labyrinth inscribed in the floor of Chartres cathedral in France.
Praying with your feet: getting in the pilgrim state of mind can be as easy as a walk in the park