the abbreviated designation, by letters, of the chemical elements.

letter or the first and one of the subsequent letters of the Latin name of the elements. In chemical formulas and chemical equations each chemical symbol expresses the relative weight (the atomic weight) in addition to the name of the element. The mass number is written at the upper left (sometimes upper right) of the chemical symbol to denote isobars and isotopes. The atomic number is written at the lower left. To denote the ion rather than the neutral atom, the ionic charge is written at the upper right. The number of atoms in a molecule of a given element is indicated at the lower right. For example,

is a single-charged ion of a chlorine isotope (atomic number, 17; mass number, 35);

is the diatomic molecule of the same isotope. The isobars of argon and calcium are denoted by

, respectively. The chemical symbols given in the table are international, but in some countries, symbols derived from the local names of the elements are used as well. For example, in France, instead of N for nitrogen, Be for beryllium, and W for tungsten, Az (azote), Gl (glucinium), and Tu (tungstene), respectively, have been adopted. In the United States, Cb (columbium) is often used in place of the symbol for niobium, Nb. The names and symbols for the elements with atomic numbers 102 and 103 (nobelium and lawrencium) have not yet been generally adopted.

Chemists of the ancient world and the Middle Ages used symbolic representations, letter abbreviations, and combinations of both (see Figure 1) to designate substances, chemical 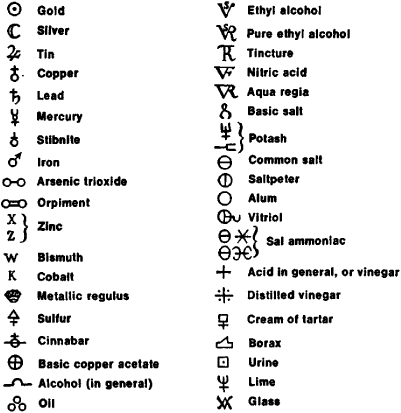 Figure 1. Several chemical symbols of the 18th century (from J. C. P. Ehrchsleben, Nachal’nye osnovaniia khimii; translated from German to [Old] Russian by N. Sokolov, St. Petersburg, 1788, pp. 16–17). The sign for copper should be inverted (misprint in the original).

operations, and instruments. Seven metals of antiquity were represented by the astronomical signs of the seven celestial bodies: sun (gold), moon (silver), Jupiter (tin), Venus (copper), Saturn (lead), Mercury (mercury), and Mars (iron). Metals discovered between the 15th and the 18th century— bismuth, zinc, and cobalt—were designated by the first letters of their names. The symbol for ethyl alcohol (Latin, spiritus vini) consisted of the letters S and ∇. The symbols for nitric acid (Latin, aquafortis) and aqua regia (Latin, aqua regia’, a mixture of hydrochloric and nitric acids) consisted of the symbol for water V and capitals F and R, respectively. The symbol for glass (Latin, vitrum) was formed of two V’s, one inverted.

Attempts to systematize the old chemical symbols continued to the end of the 18th century. At the beginning of the 19th century the English chemist J. Dalton proposed that atoms of the chemical elements be designated by circles containing dots, dashes, the initial letters of the English names of metals, and so on. Dalton’s chemical symbols gained some acceptance in Great Britain and Western Europe, but they were soon displaced by the purely letter symbols proposed by the Swedish chemist J. J. Berzelius in 1814. The principles he advanced for formulating chemical symbols remain in effect to the present day. The first published report in Russia on Berzelius’ chemical symbols was made in 1824 by Moscow physician I. la. Zatsepin.

Feedback
Flashcards & Bookmarks ?
Please log in or register to use Flashcards and Bookmarks. You can also log in with
Flashcards ?
My bookmarks ?
+ Add current page to bookmarks
Mentioned in ?
References in periodicals archive ?
The MARTIN diagram uses each letter of the name exactly three times to form nine chemical symbols.
THE MARTIN GAME
In London, supporters gathered outside the Science Museum bearing placards on which double helices and chemical symbols sat alongside political slogans.
On march to highlight 'vital role' of science in life
3 What cheese do you get if you combine the chemical symbols for Iron and Tantalum?
OUR DAILY PUB QUIZ
This handbook on well production in the oil and gas industry provides production, reservoir, drilling, and cementing engineers with information on general mathematical formulae, chemical symbols, and physical properties of materials and fluids; well technology, including casings and tubings, coiled tubing, and packers; well productivity estimate and control; stimulation; horizontal and multilateral wells; production management subjects such as water management, heavy oil production, enhanced oil recovery, artificial lift, pumps, gas lift, multiphase pumping, deposits and their inhibitors, and well servicing; cased-hole logging and imaging; and financial formulae.
Well production practical handbook, rev. ed
The band's name allows Jones and James not just to reflect their personalities but also to make cheeky use of a logo bearing the chemical symbols - CSI.
play: pick of the week; CARBON / SILICON The Last Post (Carbon / Silicon)
The formulation--95.5% tin, 3.9% silver, 0.6% copper--is also known as SAC solder, for the first letters of the chemical symbols of each of the elements (Sn, Ag, Cu).
Getting the lead out of electronics
In Study for Black Pillow II, 2002, we see an giant agribusiness under a sky full of chemical symbols and ears of corn with computer keyboards for kernels: No landscape or life-form is unaffected by chemical or genetic meddling.
Frank Moore; Sperone westwater
Data is arranged alphabetically according to the chemical symbols of the compounds involved, and each entry is accompanied by findings on the ionic conduction and the type of diffusion involved, whether it be hydrogen, oxygen, gold, silver, iron or other compounds.
Diffusion and ionic conduction in oxides; data compilation
An analysis of the chemical symbols that compose the names of the elements with atomic numbers 1 to 111 is presented in this paper in puzzle format as a new contribution to this word play about chemical elements.
In conclusion, [1] CARBON, [2] NEON, [3] SiLiCoN, [4] PHOSPHORUS, [5] IRON, [6] CoBAIT, [7] COPPEr, [8] ArSeNiC, [9] KRYPTON, [10] TIN, [11] IODINe, [12] XENON, [13] BiSmUTh, [14] AsTaTiNe and [15] RADON are formed by other chemical symbols.
In addition to that, names of elements formed for a collection of chemical symbols with a shortest transaddition have been detected in other 61 chemical elements.
Other 10 elements that can be formed by chemical symbols and other different additional letter to M are included in Figure 2 too at white squares with a letter from A to J.
Chemical elements inside of other elements