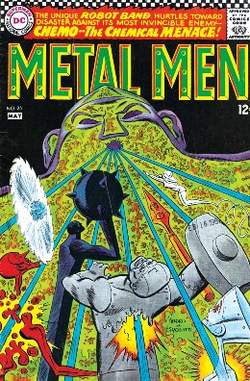 (pop culture)
Chemo, DC Comics' towering engine of destruction, began its startling existence, innocently enough, as a vat of chemicals. Writer Robert Kanigher and artist Ross Andru's Showcase #39 (1962), featuring the third appearance of the robotic superheroes the Metal Men, introduces Professor Ramsey Norton, a chemist feverishly determined to eradicate world hunger and disease. Storing the by-products of his failed experiments in a 10-foot humanoid-shaped plastic test tube he nicknames “Chemo,” Norton disposes of an organic plant compound into his synthetic mix. Its introduction sparks a chain reaction that imbues Chemo with a primitive sentience. Its toxic contents hissing and gurgling with each of its lumbering steps, Chemo enlarges in size and discharges a lethal chemical spray that kills the professor. The leviathan tromps into the city on a Godzilla-like single-minded mission to eradicate everything in its path. The Metal Men narrowly defeat Chemo by trapping it in a cavernous natural-gas prison. Boasting the abilities to grow to over 100 feet tall and spew deadly compounds, Chemo has managed to repeatedly return to menace the Metal Men and has even threatened the prodigious Superman. In a 1987 Superman/Metal Men team-up, the Man of Steel was temporarily mutated into a Chemo duplicate after exposure to industrial refuse. The Suicide Squad dispatched Chemo against the despot Imperiex in the 2001 crossover Our Worlds at War, and Chemo was dropped as a living bomb on the city of Blüdhaven in Batman #649 (2006). With its uncanny knack for regeneration, however, Chemo may be impossible to permanently defeat.
The Supervillain Book: The Evil Side of Comics and Hollywood © 2006 Visible Ink Press®. All rights reserved.

Feedback
Flashcards & Bookmarks ?
Please log in or register to use Flashcards and Bookmarks. You can also log in with
Flashcards ?
My bookmarks ?
+ Add current page to bookmarks
Mentioned in ?
References in periodicals archive ?
Chemo, 19, was hauled before the courts and banned from keeping animals.
Pregnant Gemma Atkinson unleashes tirade after Manchester man caught hitting dog; Dog lover Gemma hit out on Instagram after the man pleaded guilty to causing unnecessary suffering to an animal by subjecting the dog to unnecessary physical violence resulting in fear and distress
Chemo was also fined PS300 and given a 12-month community order with 80 hours of unpaid work.
'Cowardly' brute in sick attack on helpless dog
"Having to take chemotherapy pills twice a day regardless, I thought, 'Why not make the best of it and take it in places where I normally wouldn't have been?' How many people can say that they've done chemo on a warship?
Chrissie on a mission to take 'chemo in cool places'
Chrissie Jackson is taking part in a "Taking chemo in cool places" challenge
Woman with Stage 4 cancer is on unusual mission to take her chemo tablets in "cool places"; Chrissie Jackson, 46, from Stockton Heath in Warrington, has stage 4 metastatic cancer but is remaining hugely positive about her uncertain future
She said: "I'm doing fine at the moment with the chemo, I'm managing the side-effects and keeping myself as well as I can.
Brave Catherine won't give up in the war on cancer
Nearly all study participants had typical chemo side effects such as nausea or low blood cell counts, but serious ones were more common with the combo treatment and twice as many women on it stopped treatment for that reason.
Immunotherapy scores a first win against some breast cancers
I don't want my hair to fall out from chemo, or my face burned from radiotherapy.
I'm risking jail to treat my brain tumour with cannabis oil; New anguish for Playboy model who became prude after cancer op; BEAUTY QUEEN KERRI IS SNUBBING CHEMO; EXCLUSIVE
Taxol actually hit me quite hard at first, as unbeknownst to me I had contracted conjunctivitis from my son and with chemo your immune system virtually shuts down so any infection feels a ton worse than normal.
My first chemo: What happened
Upon approval of benznidazole, the US FDA granted Chemo Research a neglected tropical disease priority review voucher (PRV), added the companies.
Chemo Group awarded US FDA approval of life-saving medical treatment benznidazole in aid of people with Chagas disease
Perhaps one of the most recognizable side effects of chemo is hair loss.
Some Chemo Treatments May Help Breast Cancer Spread
Miami, FL, July 12, 2017 --(PR.com)-- Live Like Bella and We Care Chemo Kits join forces at its 1st Annual Ice Cream Social Fundraiser at Sloan's Ice Cream in CityPlace Doral on Saturday, July 29, 2017 from 2pm to 5pm to promote cancer awareness and raise funds for cancer research.
Live Like Bella and We Care Chemo Kits Announce Partnership
Eileen Reid was diagnosed with breast cancer in 2011 and endured months of gruelling chemo.
I'm convinced the chemo I got for breast cancer gave me leukaemia. It can be like taking a machine gun to a mouse and women need to know all the risks; MUM'S PLEA TO DOCS OVER GRUELLING TREATMENT; Patient Only four out of 100 people need it