A series of ternary molybdenum chalcogenide compounds. They were reported by R. Chevrel, M. Sergent, and J. Prigent in 1971. The compounds have the general formula MxMo6X8, where M represents any one of a large number (nearly 40) of metallic elements throughout the periodic table; x has values between 1 and 4, depending on the M element; and X is a chalcogen (sulfur, selenium or tellurium). The Chevrel phases are of great interest, largely because of their striking superconducting properties.

Most of the ternary molybdenum chalcogenides crystallize in a structure in which the unit cell, that is, the repeating unit of the crystal structure, has the overall shape of a rhombohedron with a rhombohedral angle close to 90°. The building blocks of the Chevrel-phase crystal structure are the M elements and Mo6X8 molecular units or clusters. Each Mo6X8 unit is a slightly deformed cube with X atoms at the corners, and Mo atoms at the face centers. One of these structures, that of PbMo6S8, is shown in the illustration. See Crystal, Crystallography 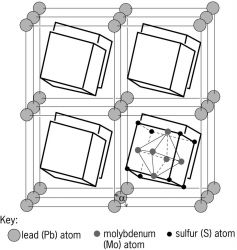 Several of the Chevrel-phase compounds have relatively high values of the superconducting transition temperature, Tc, the maximum being about 15 K (-433°F) for PbMo6S8. The Chevrel-phase PbMo6S8 has a value of the upper critical magnetic field near absolute zero Hc2(O) of about 60 teslas (600 kilogauss), which was the largest value observed prior to the discovery of high-temperature ceramic superconductors in 1986. A number of Chevrel-phase compounds of the form RMo6X8, where R is a rare-earth element with a partially filled 4f electron shell and X is S or Se, display magnetic order at low temperatures in addition to superconductivity. See Superconductivity