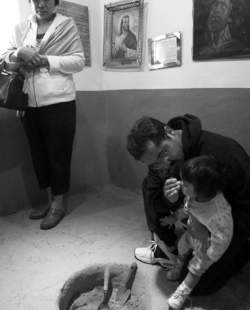 Mud contained in a hole at the Nuestro Señor de Esquí pulas church in Santa Fe, New Mexico, has healing powers, according to many Christians. Getty Images.

Almost due north of Santa Fe, New Mexico, the village of Chimayo lies in the Sangre de Cristo Mountains. Far from a major highway, it is nevertheless the destination of thousands of pilgrims annually, many of whom seek out a church named Nuestro Señor de Esquípulas. Inside the small chapel, they make their way to an even smaller room adjacent to the altar, where there is a hole filled with mud, the object of their pilgrimage. The mud is smeared on the body in the hope of bringing relief to the body, mind, and/or spirit of the devout believers. Elsewhere in the church are numerous objects, including crutches and braces, left behind by people as a record of their cure.

The petition to erect the chapel at Chimayo was granted in 1818. It is a modest adobe structure surrounded by an adobe wall. It was a privately owned chapel until the 1920s, when the owners ran into severe financial problems. The Roman Catholic Church purchased and currently maintains it.

The site has been related to a similar site in Esquípulas, Guatemala, where a parallel tradition of healing earth had led to the emergence of a church known locally for the healings that occur there. It appears that at the beginning of the nineteenth century, someone from Chimayo traveled to Guatemala, evidenced by the presence of a uniquely shaped wooden cross at both sites.

The healing earth of Chimayo had been known and venerated for centuries before Spaniards brought Christianity to the region in the sixteenth century. It is possible that the region was geologically active in relatively recent times and that the mud hole is the site of a former geyser. There are a variety of stories about the recognition of the mud as a healing substance, all the product of an oral culture, many contradictory in content.

Whatever the truth hidden in the various stories might be, today pilgrims come to gather small amounts of the mud. Some immediately apply it to their body or ingest it. Others carry it away for use back at home. Each evening, those who tend to the chapel refill the hole with dirt from nearby land, a fact not widely advertised. The largest number of pilgrims come during Holy Week when, besides visiting the chapel, they may also view a passion play recounting the life of Christ.

Feedback
Flashcards & Bookmarks ?
Please log in or register to use Flashcards and Bookmarks. You can also log in with
Flashcards ?
My bookmarks ?
+ Add current page to bookmarks
References in periodicals archive ?
Or you can stargaze over the haute Southwestern fare at Chimayo ($$$$; 368 Main; 435/649-6222).
Last-minute Sundance: see movies. See stars. Here's Sunset's guide to the most enjoyable Film Festival in the world
Her hand-dyed, handwoven textiles are stellar examples of the region's traditional Navajo, Rio Grande, and Chimayo styles of weaving.
October in the West
Don't make us choose between the roasted zucchini and green chile and the traditional red pork chile from this company in Chimayo, New Mexico.
Stock up: mail-order tamales
Off-season, the High Road from Santa Fe to Taos--State 76 and 518--which weaves through the villages of Chimayo, Truchas, and Las Trampas, seems as drowsy and lonely as the New Mexico of a century past.
Road to enchantment; Santa Fe, Taos, ancient wonders, and sublime food: take the ultimate drive around New Mexico
First stop is Chimayo. With its venerable cottonwood bultos (statues) of San Rafael and San Jose, the recently restored Santuario de Chimayo church (Santuario Rd.; 505/351-4889) is a 188-year-old source of artistic inspiration.
Visit the carvers: artisans along the High Road to Taos
Plump bags of pure dried red chilies, both Hatch and Chimayo, tempt buyers to stock up for the winter.
Taos harvest drive: sample New Mexico's autumn bounty
At noon on a quiet Sunday in northern New Mexico, villagers gather at El Santuario de Chimayo to pray before a 19th-century gold-leaf altar imported from Mexico.
Surviving the centuries: discover New Mexico's Spanish colonial art in timeless high road villages, historic, churches, galleries, and a vibrant new museum. (Travel)
Rancho Manzana: Lavender Festival 12-5 July 20-Aug 2; otherwise, accessible when a guest at this B&B; Chimayo; (888) 505-2227.
Loving lavender. (Bloom)
Molesworth is best known for Douglas fir peeled-pole furniture featuring bright red Chimayo Indian weavings and carved or routed representations of Western images such as bison, tepees, and bowlegged cowboys.
At home on the range
Mobilization of arsenic in a shallow groundwater aquifer due to C[O.sub.2] leakage has been investigated at one of the natural analog sites, Chimayo, New Mexico, where C[O.sub.2]-saturated brackish water was leaked into the shallow aquifer along the fault [7, 13, 24, 25].
C[O.sub.2] Leakage-Induced Contamination in Shallow Potable Aquifer and Associated Health Risk Assessment
Francis restaurant--is serving up Chimayo chile-marinated meat and a bright salad of Arizona-grown citrus.
Dinner and a show
Encyclopedia browser ?
Full browser ?
CITE
Site: Follow: Share:
Open / Close