Cylindrical shape placed on top of a chimney to increase its height; often of terra-cotta and treated as an ornamental device. 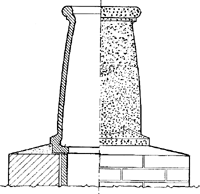 chimney pot
A cylindrical pipe of brick, terra-cotta, or metal placed atop a chimney to extend and thereby increase the draft.
McGraw-Hill Dictionary of Architecture and Construction. Copyright © 2003 by McGraw-Hill Companies, Inc.

Feedback
Flashcards & Bookmarks ?
Please log in or register to use Flashcards and Bookmarks. You can also log in with
Flashcards ?
My bookmarks ?
+ Add current page to bookmarks
Mentioned in ?
References in periodicals archive ?
Chimney pots, especially exact reproductions of those made in the 19th or early 20th centuries, may appear a strange pursuit for a contemporary artist, but Lucas has accepted these commissions for several reasons.
Cheryl Lucas: new pots for old: Grace Cochrane describes the reconstruction of chimneys in the aftermath of the New Zealand earthquakes
Dad-of-two Huntley, from Bromsgrove, was carrying out repair work on three chimney pots at the Bearwood home when he discovered the mum and babies nesting in one of them.
DIY star builds rooftop home... for a squirrel!
"I don't know if it's the Coronation Street link or the fact people will be getting the chance to live in a brand new, unusual and exciting development for less than pounds 100,000, but Chimney Pot Park has really captured people's imaginations."
CASHING IN ON CORRIE; Soaperstar homes get a fresh, modern makeover
A spokesman for the SNPA said: "The dry stones walls and the byre had been demolished, the extension was nearly twice the length of the original cottage, unsuitable stones were used for the extension, a porch was added which was incompatible with the rest of the cottage, the old traditional windows had been replaced by modern windows, the original red chimney pot was replaced by a black and metal chimney pot and roof details had also been changed."
Work on listed cottage 'has damaged Park' OWNER MUST PUT IT RIGHT AS APPEALS AGAINST ENFORCEMENT THROWN OUT
This could be because the chimney stack needs to be repaired, the chimney pot isn't capped, or the chimney breast isn't ventilated properly indoors.
Damp busters; HOMES
Swedish post company the Chimney Pot worked on several Berlinale winners, including "If I Want to Whistle, I Whistle," "Sebbe" and "Incident by a Bank." The company has offices in Stockholm, Warsaw, Kiev and Dubai.
Scandi makes itself handy: Nordic nations unite to develop resources, showcase locations and promote production
Apart from reinstating any missing chimney pot check pointing and flashings at the junction between the stack and the roof.
A burning issue for the winter; house doctor with Peter Fall of Clear Building Survey
"We both heard a whooshing noise and then what sounded like thunderclaps but it was the chimney pot bouncing off the roof.
WALES: We heard a whoosh... I went out and the chimney was gone; LUCKY ESCAPES AS WIND BATTERS REGION
n "He got a chimney pot and put it on his head making him look like Ned Kelly."
QUOTES OF THE WEEK
This smashed into another which then fell in turn, badly damaging three roofs and causing bricks and a chimney pot to fall out into the road where a pedestrian passed just seconds later.
Close call for tot as tree crashes into house
Santa finds the chimney tall; parks his sleigh against the wall, Dropping down the chimney pot, to find the hanging Christmas sock.
POEM OF THE DAY
Liverpool architects Shed KM have managed a brace of nominations for their Chimney Pot Park in Langworthy and Matchbox in Speke.
City's building gems pin hopes on prestige prizes