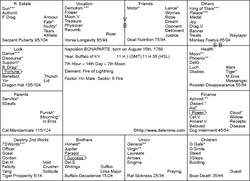 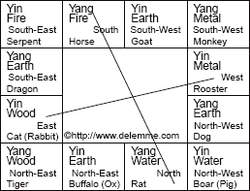 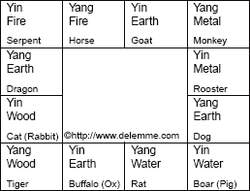 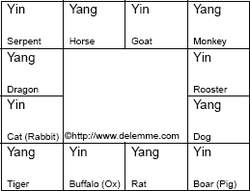 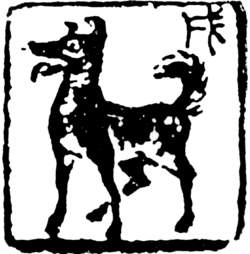 An image of the zodiacal dog from Chinese astrology. Reproduced by permission of Fortean Picture Library.

The Chinese were one of the few cultures to develop a complex system of astrology entirely independent of Mesopotamian influences. (Mesopotamian astrology is the starting point for both Western astrology and Hindu astrology.) In much the same way that popular astrology in the West is confined to knowledge of the 12 sun signs, most people’s awareness of Chinese astrology is confined to the 12 animal “year signs.” Many of the intricacies of the tradition dropped out of currency, even among Chinese astrologers, after the Golden Age of Chinese Astrology during the Chou and Han dynasties, but some contemporary astrologers have attempted to resuscitate classical Chinese astrology.

As might be anticipated, the Chinese system differs significantly from Mesopotamian-derived systems. In the first place, the Chinese group the stars into quite different constellations. Second, the Chinese locate heavenly bodies with respect to the celestial north pole and the celestial equator (called the Red Path by the Chinese) rather than with respect to the ecliptic (termed the Yellow Path). In the third place, while Western systems emphasize the placement of the planets along the ecliptic, the Chinese traditionally give primary importance to the Moon’s placement in the daily lunar mansions (a kind of 28-sign lunar zodiac). Fourth, the Chinese assign meanings to the general appearance of a planet as modified by Earth’s atmosphere, meaning that, unlike Western astrologers, who examine the stars only indirectly through tables, traditional Chinese astrologers maintain a continual watch of the heavens.

Points at which cultural traditions differ between astrological systems have naturally worked themselves out. For example, the four classical elements of the Western world—earth, air, fire, and water—are comparable to, yet contrast with, the five elements of East Asian philosophy—earth, fire, water, metal, and wood. The Chinese associated these five elements with the five visible planets—Saturn (earth), Mars (fire), Mercury (water), Venus (metal), and Jupiter (wood). The meanings the Chinese assigned to the first three planets are roughly comparable to their meanings in Western systems. Jupiter, the wood planet, however, is associated with birth and springtime, associations that distinguish the meaning of the Chinese Jupiter from the Western Jupiter. And Venus, as a metal planet, is associated with martial, masculine characteristics, traits alien to the Western Venus.

While all traditional civilizations evince an interest in divination, the Chinese appear to have had a peculiarly strong interest in foretelling the future. For example, some of the earliest written artifacts of Chinese civilization are found on the so-called dragon bones, inscribed pieces of tortoise shell used by the ancients for divination. In the contemporary period, one of the most widespread tools of divination is the I Ching (The Book of Changes), a traditional Chinese work that has become popular in the Western world. The I Ching, however, is much more than just a fortune-telling device. Querents seek to know not only how the future will unfold but also how and when they ought to act. Similar concerns manifest in traditional Chinese astrology, which is more concerned with divining the future and determining the proper times to act than with understanding personality characteristics.

The Chinese system contains three “Lucks”: Heaven Luck is one’s Fate or Destiny. Astrology deciphers Destiny, which can sometimes be improved. Earth Luck is tightly associated with the local characteristics of the specific spot in which one lives. It is the domain of Feng Shui. One can improve one’s House, and thus improve Health and Luck. Human Luck is what one does with one’s Life.

There are in fact several Chinese astrologies, which include two main techniques. The Four Pillars of the Destiny or Ba Zi deals with the 12 well-known animals of the Chinese zodiac (Rat, Buffalo, Tiger, etc.) but also with Yin and Yang and with the five elements (Earth, Metal, Water, Wood, and Fire). Zi Wei Dou Shu analyzes the location and aspects of 109 stars (or energies). These stars are located in a chart consisting of a rectangle divided into 12 boxes (these two techniques are explained in the program Izi Wai, which can be downloaded and tested at www.delemme.com/etelchin.htm.

Chinese astrology has nothing to do with the horoscopes found in some magazines. Many people are familiar with Yin and Yang, elements, and the 12 animals of the Chinese zodiac. To be born in the year of the Rat or some other animal year is like being born under a certain sun sign in Western astrology—it is only the beginning. Zi Wei Dou Shu takes 109 energies into account (the main energy, King of the Stars, as well as others such as Flying Dragon, Nullity, and Fate) located in 12 boxes (or palaces), and considers the annual transit of eleven other mobile bodies. This energy chart allows remarkable readings, revealing a person’s whole life, decade after decade, year after year, moon after moon, and even hour after hour. It is thus relatively easy to distinguish between a person’s periods of success, of neutrality, or of failure. Chinese astrology is a remarkable tool for obtaining precise knowledge of the nature and date of the events that take place throughout one’s life.

Reading a Chinese chart is easy for the neophyte, because the person’s life “program” is written practically and clearly in the houses of Destiny, Luck, Vocation. The names speak for themselves and arouse a rich association of ideas: a twinkling Fortune in the Finances box can be easily understood, while Thunder and Officer in the Vocation box suggest a military career.

Zi Wei Dou Shu astrology analyzes the location and aspects of 109 stars (or energies). A Zi Wei Dou Shu chart is therefore made up of a large rectangle (a paddy field) divided into 12 boxes or Palaces (plots of land). The distribution of these 109 energies depends on the birth data (Chinese year, Chinese moon, Chinese day and Chinese hour) and on the sex. A Western (Gregorian) date of birth must be translated into its equivalent in the Lunar Chinese Calendar. The hour of birth is likewise converted into a Chinese hour (12 hours a day). Each energy is more or less powerful: it can be faint (•), neutral, shining (*), very shining (**) or sparkling (***), depending on the date and hour of birth. Twelve Houses are then settled, each corresponding to one of the 12 boxes. These Houses govern the particular aspects of a human life: Destiny, Parents, Luck, Vocation, etc.

These 12 boxes correspond to the 12 animals of the Chinese zodiac:

These boxes do not move. For instance, the Tiger is always on the bottom left-hand side, while the Monkey is always on the top right-hand corner. (See Figure 1.) Each box symbolizes several things. For instance, an energy acts differently, depending on whether it is located in the Rat box or in the Buffalo box. Figure 2 shows the addition of the Yin-Yang polarity.

Boxes can also correspond to a given life area (parents, children, friends, etc.); a decade (life is divided into 12 periods of 10 years); a given year; a given lunar month (moon); a given day; and a given hour (a day is divided into 12 Chinese hours, which are also associated with the name of one of the 12 animals: Rat Hour, Buffalo Hour, Tiger Hour, etc.).

It is thus very important to rate these 12 boxes, because one will be able to say if a life area is harmonious or not, if the climate of a decade is tumultuous or calm, or if a year will be happy or not.

Depending on the birth hour and the birth moon (remember that this astrology uses the Lunar Chinese Calendar), 12 Houses, or Palaces, are associated with the 12 fixed boxes.

These 12 Houses are distributed clockwise:

House I or Destiny Palace

House VII or Others Palace

A thirteenth House is added, which is superimposed on one of the previous 12 Houses. It is the House of the “Second World,” which describes life after the age of 30. The placement depends on the Chinese birth hour.

Each box is associated with a decade, sorted out, and distributed differently depending on how the native is characterized:

In each box, the names of planets (Moon, Mars, Jupiter, etc.), stars (Sun, Ursa Major), or more “Chinese” energies (Yang, Virtue of the Dragon Flying Dragon, Heavenly Void, etc.) are indicated. There are 109 energies altogether, but only 36 of them are considered important. Some of them are nice companions (left column), others are more violent (right column).

Napoleon’s House of Destiny is in the Tiger box (see Figure 5) which also corresponds to the Second World. The Seven-Swords energy is there, together with Officer and Seal, which both symbolize military success. Also note the presence of Void, an energy that is fatal to dictators.

The rating of the 12 boxes of a Zi Wei Dou Shu chart is also important at the Feng Shui level. Feng Shui is the art of harmonizing one’s house with one’s life, and it is important to know how to rate the boxes of one’s natal chart. The most “beautiful” boxes indicate auspicious directions, those one should respect, according to the following correspondence:

An astrological chart of a house can be built, at least in the Xuan Kong school (flying stars), which draws up a map of the Cosmic Energy. This chart is alive (there are transits of mobile stars) and allows to forecast some events: for instance, a transit of the “bad” star N°5 on the “natal” same star N°5 is rather malevolent. Feng Shui, deals with the concept of Ch’i, (Qi, Ki, etc.), i.e. the Cosmic Energy.