elm, common name for the Ulmaceae, a family of trees and shrubs chiefly of the Northern Hemisphere. Elm trees (genus Ulmus) have a limited use as hardwoods for timber, especially the rock or cork elm (U. thomasi). Tall and graceful, with fan-shaped crowns of finely subdividing branches and twigs, elms are widely planted as ornamental and shade trees, chiefly the American, or white, elm (U. americana) and the English, or Wych, elm (U. campestris) of N and central Europe and W Asia. Tolerant of urban conditions, both species are among those plants attacked by the fungus known as Dutch elm disease (see fungal infection), but disease-tolerant varieties have been propagated. The mucilaginous inner bark of the slippery elm (U. fulva) is used medicinally in cough drops. Some species of the genus Celtis (the hackberries of America and the nettle trees of the Old World) are cultivated for their edible fruit. False sandalwood (Planera aquatica) is a member of the elm family; its fragrant wood is used in cabinetmaking. The elm family is classified in the division Magnoliophyta, class Magnoliopsida, order Urticales.
The Columbia Electronic Encyclopedia™ Copyright © 2022, Columbia University Press. Licensed from Columbia University Press. All rights reserved. 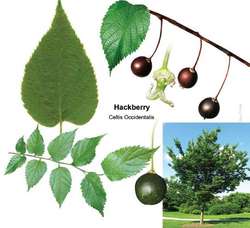