the theory of the relationship between the color of chemical compounds and their structure. The perception of color arises upon the action on the optic nerve of electromagnetic radiation with an energy of 2.5 × 10–12 to 5 × 10–12 erg [wavelengths of 400 to 760 nanometers (nm)]. The combined action of electromagnetic radiation within the entire given range, called the visible region of the spectrum, induces the perception of white light, whereas the individual effect of narrow radiation beams or of the total radiation remaining after the exclusion (absorption) of a certain portion induces the perception of colored light (see Table 1).

The shift of λmax toward longer waves during a change in a compound’s molecular structure, accompanied by a change in color from yellow to red and then to blue and green, is called the bathochromic effect, while the shift toward the shorter waves is called the hypsochromic effect. The absorption of light leads to the excitation of electrons in molecules, in particular, the molecules of a colored substance in the visible region (λ = 400–760 nm). The energy difference in the ground state and the excited state determines the depth of color. The excitation of the molecules of colorless substances occurs at greater energy values than excitation of molecules of colored substances. It follows from the fundamental ratio in quantum theory E = hc/λ, where E is the energy of a quantum of light, h is Planck’s constant (6.62 × 10–27erg/sec), and c is the speed of light (3 × 1017 nm/sec), that the excitation energy for molecules of colored substances may be estimated at 35 to 70 kcal/mole.

The theory of chromaticity emerged in connection with the development of the chemistry of synthetic organic dyes. The relationship between the structure of dyes and color was first studied by the German chemists K. Liebermann and K. Graebe (1869). In 1876, O. Witt proposed the chromophoric theory, according to which the color of organic compounds is due to groups of atoms containing multiple bonds, such as —N═N— and —N═O.

These groups were named chromophores. The German chemist R. Nietzki and the British chemist H. Armstrong noted (1888) the exceptional role of quinoid chromophores. According to the chromophoric theory, the groups —OH, —SH, NH2—, and C6H5O—, among others, known as auxochromes, have a substantial effect on the color of organic substances. In 1915, the Russian chemist V. A. Izmail’skii concluded that the true structure of dyes is not described by the classical structural formula but corresponds to a certain intermediate state, which was later called mesomeric. This state is characterized by a delocalization of bonds and atomic charges in the molecule (seeRESONANCE, vol. 16), which occurs especially easily in molecules containing a system of conjugated bonds with electron-donor and electron-acceptor groups arranged at the ends. This combination, which is characteristic of nearly all types of dyes, determines both the easy polarization of the molecules (as a result of the shift of -n electrons along the chain of conjugation) and the transition of molecules to the excited state. The first determines the intensity of light absorption, while the second determines the depth of a substance’s color.

In accordance with the given assumptions, the longer the chain of conjugation in the molecule of a particular substance, the deeper the color. Therefore, in the hydrocarbon series C6H5—(CH═CH)n—C6H5, λmax increases from 306 nm (at n = 1) to 403 nm(at n = 5).

The molecules of compounds in which the conjugation chain ends with electron-donor and electron-acceptor groups have a deeper color. Thus, in the series of substances of type (I), λmax varies from 312 nm(n = 1) to 519 nm (n = 3).

An analysis of the structure of the substituents and space factors makes it possible to predict their effect on the color of compounds. For example, the disturbance of the planar structure of the molecules of type (Ha) azo dyes

caused by the extraction of the (CH3)2N group from the plane of the benzene ring by the three-dimensional substituent R is accompanied by the hypsochromic effect: λmax on transition from R = H to R = (CH3)2CH— is shifted from 475 nm to 420 nm.

Steric hindrances in the chain of conjugation substantially alter the nature of absorption (seeSTERIC HINDRANCE). Thus, if the rotation of one part of a molecule of dye relative to another occurs along a bond similar to a simple bond, for example, a in (III), then the hypsochromic effect is observed; if rotation occurs along a bond of a higher order, for example, b in (IV), then the bathochromic effect is observed. For example, upon the substitution of R = CH3 for R = H in (III), λmax varies from 528 nm to 467 nm, and in (IV), from 521 nm to 542 nm. 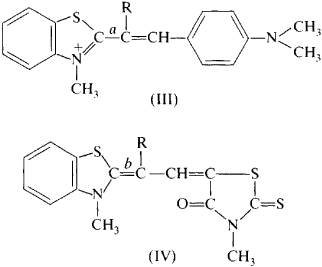 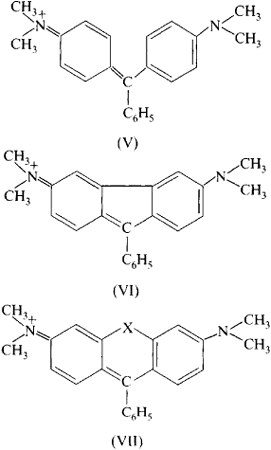 In 1964 the Soviet chemist A. I. Kiprianov demonstrated that the intramolecular interactions of chromophores affect the chromaticity of dyes. For example, biscyanine (VIII) is characterized by two λmax (522 and 581 nm), which are shifting with respect to the λmax of the initial dyes (IX) and (X) (562 and 558 nm, respectively) in the short-wave and long-wave portions of the spectrum, respectively.

The assumption of the theory of chromaticity regarding the connection between a substance’s color and electron excitation is applied not only to organic compounds containing extended systems of conjugated bonds but to other types of colored substances as well. Thus, for inorganic compounds, the color may be associated with the extensive distortion of electron orbitals; in this case, the principal role is attributed to the polarization of an-ions, an increase in the deformability of which should be conducive to the development of chromaticity. The color of certain inorganic substances is further related to the presence in their molecules of atoms with vacant orbitals. It is assumed, for example, that the color of complex ions is caused by the presence in the ions of atoms of elements with incomplete d- or f-orbitals (seeCOMPLEXES). The intensive absorption of light by these ions is associated with the transfer of ligand electrons to the vacant orbitals of the central atom.

The calculation of the absorption bands of colored chemical compounds (resulting from their structural formulas) involves the use of existing quantum-mechanical methods, which in many cases yield results that coincide with experiment. Absorption bands for dyes containing molecules of complex, especially asymmetric, structure are still difficult to obtain.