Christian Science, religion founded upon principles of divine healing and laws expressed in the acts and sayings of Jesus, as discovered and set forth by Mary Baker Eddy and practiced by the Church of Christ, Scientist. The church teaches that God is good and the only reality, and that sin, evil, and illness are overcome on the basis of this understanding. Adherents rely on spiritual, rather than medical or material, means for healing. The occasion of Mary Baker Eddy's discovery of divine healing was her immediate recovery of life and health when in 1866 she read an account of healing by Jesus in the New Testament. In 1875 her Science and Health (later published as Science and Health, with Key to the Scriptures) was published. In 1879 she established the Church of Christ, Scientist. In Boston in 1892 was organized the First Church of Christ, Scientist—the Mother Church, of which Christian Science churches throughout the world are branches. Each individual church is self-governing and self-supporting, but all accept the tenets framed by the founder and incorporated in the Church Manual. Upon Eddy's death in 1910, the administrative power was assumed, as laid down in the Manual, by the Christian Science Board of Directors. An extremely active organization, the board enabled Christian Science to grow steadily in numbers and scope of activity during the first third of the 20th cent. Of the numerous publications the church issues, the most important include the Christian Science Monitor, a daily newspaper; the Christian Science Quarterly; the Christian Science Sentinel; and the Christian Science Journal. These are published by the Christian Science Publishing Society. Other activities are conducted by a board of education and a board of lectureship. The churches have no individual pastors. Services are conducted by two readers, one reading from the Scriptures, the other from Science and Health. All churches use the same lessons at the same time. The teachings are drawn from the life and words of Jesus. Although most Christian Scientists are in the United States, the religion is found in 70 countries with large Protestant populations. A great percentage of its adherents are women. 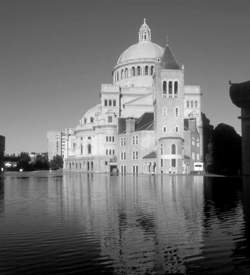 In 1990 the Church of Christ, Scientist, was in serious trouble. Enrollments were down, giving was down, and a disastrous attempt to begin a television station, the Monitor Channel, had cost the church some $316 million. The station's shutdown was soon followed by that of the money-losing Monitor Radio network. From an estimated 268,915 U.S. followers in 1936, membership had dropped to 106,000. The 11,200 healers that practiced in 1941 had seen their numbers shrink to only 1,820. Worse yet, a landmark Massachusetts criminal court had, amid much publicity, convicted David and Ginger Twitchel of manslaughter in the tragic death of their twoyear-old son resulting from a bowel obstruction, a death the court thought could have been prevented if the parents had gone to a doctor instead of relying on a Christian Science practitioner.

But by 2000 things had changed considerably. Seven hundred new bookstores in Latin America now carry the religion's textbook and Bible companion, Science and Health with Key to the Scriptures. The book is sold at agricultural fairs in Africa and book fairs in Japan. Some 2,500 people filled an airport hanger in Kinshasa in the Congo to attend a Christian Science lecture.

Clearly the church has discovered a new and enthusiastic audience. In September 2002, the new Mary Baker Eddy Library for the Betterment of Humanity opened in Boston, right next to the mother church on Massachusetts Avenue. Clay Bennett, editorial cartoonist for the Christian Science Monitor, the newspaper begun by Mary Baker Eddy, won a Pulitzer Prize earlier in the year.

The world seems to have rediscovered the teachings of Mary Baker Eddy, founder of the Church of Christ, Scientist, popularly known as Christian Science.

The church's theological centerpiece and reason for being is based in its belief that the root of illness lies in the mind, not just the organs of the body. In Science and Health Eddy wrote: "A patient under the influence of mortal mind is healed only by removing the influence on him of this mind." She had come to this conclusion through her own experience of self-healing and a study of Jesus' cures as recorded in the Gospels. Since then countless case studies, probably at least one from every member of the church, have confirmed Eddy's thesis to the satisfaction of thousands of believers over the years. They flock to Christian Science Reading Rooms, located in most cities nationwide, to read and listen to lectures. During church services, passages from the Bible are followed with readings from Science and Health. The Massachusetts Metaphysical College in Boston trains healers to aid recovery from illness by working with the patient to correct intellectual and spiritual obstructions caused by false thinking.

Eddy, while believing firmly that no one person should ever control any institution, especially the church she founded, was one of the most influential women of the nineteenth century. Given the sexism of that time, her church probably received less support than it would have had it been founded by a man. Even so, Christian Science thrived and is no doubt here to stay. The church has made some concessions. Whether or not members will see doctors during illness, especially the illness of a child, is left up to the individual. Like all churches, there are splits and divisions. Some people think the very fact of going to a doctor is a confession of faithlessness that will prevent healing. Others think there are times when medicine can be used as a physical crutch, needed until a spiritual healing takes place.

A lot of New Age thought is simply the rediscovery of ancient Eastern religion. The fact that so much of that thought resonates with Eddy's teachings has no doubt aided the surge of renewed interest in Christian Science, regarded by some as perhaps the first hundred-year-old New Age religion. But a faith with such a large base of anecdotal evidence and personal, eyewitness accounts of healing cannot be ignored. New ways of describing those healings and explaining the basis of Christian Science may be utilized, much to the dismay of fundamentalists within the organization. But in the words of Virginia Harris, chair of the church's board of directors, "I like change because it is progressive. The world goes forward, so no matter how much you whine or talk about the past you can't get back there.... [But] as you go forward with change, always [remain] true to who you are."

the religious system and teaching of the Church of Christ, Scientist. It was founded by Mary Baker Eddy (1866) and emphasizes spiritual healing and the unreality of matter
www.tfccs.com
Collins Discovery Encyclopedia, 1st edition © HarperCollins Publishers 2005