the termination at the sanctuary end of a church, generally semicircular in plan but sometimes square or polygonal. The apse appeared early in Roman temples and basilicas; it was originally a semicircular recess with a half dome as ceiling and contained the monumental statue of the deity. The motif was adopted in the early Christian churches; in these the apse occupied the eastern end of the building where the altar, the bishop's throne, and the seats of the clergy were placed. A fine example of this early form is in the cathedral of Torcello near Venice. Because of its location and function in the church services, the apse became the architectural climax of the church interior and was richly ornamented. In the early churches, the half-dome ceiling was incrusted with handsome mosaics, the walls were veneered with fine marbles, and the altar and pulpits were also richly decorated. As the apse steadily increased in liturgical and architectural emphasis, chapels were added to it. In English Gothic architecture the apse was in most cases a square termination, and in Italy its form remained a simple semicircle, as the chapels were in another part of the church. In France the entire choir—composed of apse, ambulatory, and radiating chapels (the whole termed a chevet)—attained, in the 12th and 13th cent., its great splendor.
The Columbia Electronic Encyclopedia™ Copyright © 2013, Columbia University Press. Licensed from Columbia University Press. All rights reserved. www.cc.columbia.edu/cu/cup/

A semicircular or polygonal space, usually in a church, terminating an axis and intended to house an altar.

[aps]
(architecture)
A semicircular (or nearly semicircular) or semipolygonal space, usually in a church, terminating an axis and intended to house an altar.
(astronomy)
apsis
McGraw-Hill Dictionary of Scientific & Technical Terms, 6E, Copyright © 2003 by The McGraw-Hill Companies, Inc. 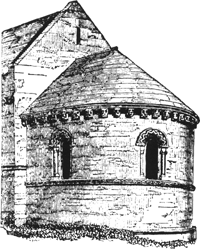 apse
A semicircular (or nearly semicircular) or semipolygonal space, usually in a church, terminating an axis and intended to house an altar.
McGraw-Hill Dictionary of Architecture and Construction. Copyright © 2003 by McGraw-Hill Companies, Inc.

1. a domed or vaulted semicircular or polygonal recess, esp at the east end of a church
2. Astronomy another name for apsis
Collins Discovery Encyclopedia, 1st edition © HarperCollins Publishers 2005