Centriole-based, motile cell extensions. These organelles are usually indistinguishable in fine structure as seen with the electron microscope, but quantitatively there are many (several hundred) cilia, and few or fewer (usually one or two) flagella, on one cell. Bacterial or prokaryotic flagella are entirely different organelles that are not considered in this article, which concerns only eukaryotic flagella.

Flagella move with undulatory motion in which successive bending waves progress along the length of the organelle, whereas cilia move with flexural motion consisting of a planar effective stroke, with the organelle extended perpendicular to the cell body, followed by a nonplanar curving recovery stroke, with the organelle pulled parallel to the cell body. Both organelles function to move water past the cell. Their action may bring food and oxygen into an animal, or it may propel the cell to a new environment.

The words cilium (eyelash) and flagellum (whip) are accurate descriptions of the appearance of these cell organelles when they are seen under the light microscope. Cilia are present on protozoa, such as Paramecium, and on metazoan cells of many different tissue types. A flagellum is present on human sperm; in fact, the sperm of most animals possess a flagellum, and, correspondingly, male gametes of many lower plants are flagellated. In addition, many ordinary types of cells of vertebrates, for example, from the thyroid, the kidney, or the pituitary gland, possess modified nonmotile derivatives that resemble cilia. See Ciliophora, Epithelium, Sperm cell

Relative to cell size, both cilia and flagella are very long organelles. Flagella may be over 50 micrometers long. Certain compound cilia, such as the comb plates of ctenophores, are macroscopic structures, visible to the naked eye. Usually, however, cilia range from 10 to 15 μm in length.

The electron microscope reveals that the cilium or flagellum is really an internal organelle since it is bounded by the cell membrane and enclosed at the tip. The main internal structure of the cilium is the axoneme. Under the electron microscope, a single axoneme appears to contain a fixed pattern of microtubules. The microtubules are not simple single units; rather, nine doublet microtubules are found on the periphery of the axoneme surrounding two central elements. This is the so-called 9 + 2 pattern (see illustration). Each peripheral doublet is composed of one complete and one partial microtubule. The microtubules are themselves composed of subunits arranged into microfibers or protofilaments. 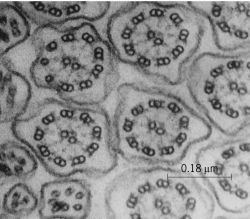 At the base of the cilium or flagellum there is a basal body, or kinetosome, that is similar to, and sometimes derived from, a centriole. The basal body may have extensions of various sorts attached to it, notably a basal foot that indicates effective stroke direction and prominent striated rootlet fibers in many cilia. Ordinarily, the ciliary axoneme originates and grows in a membrane protrusion which forms just above the basal body, either at the cell surface or deeper inside the cytoplasm. The basal body remains attached to the cell membrane throughout morphogenesis by a structure that extends from the microtubules to the membrane, where it is seen as a ciliary necklace. See Centriole

Feedback
Flashcards & Bookmarks ?
Please log in or register to use Flashcards and Bookmarks. You can also log in with
Flashcards ?
My bookmarks ?
+ Add current page to bookmarks
References in periodicals archive ?
Fuller, "Monoclonal antibodies specific for an acetylated form of a-tubulin recognize the antigen in cilia and flagella from a variety of organisms," Journal of Cell Biology, vol.
New Roles of the Primary Cilium in Autophagy
147-171 in Cilia and Flagella. Ciliates and Flagellates, K.
Formation of the statolith in the ctenophore Mnemiopsis leidyi
(2009) A novel neuronal calcium sensor family protein, calaxin, is a potential [Ca.sup.2+]-dependent regulator for the outer arm dynein of metazoan cilia and flagella. Biol.
Tubulin-dynein system in flagellar and ciliary movement
Axonemes are microtubule-based organelles that mediate motility in cilia and flagella. Structure/function tests show the D.
Evolutionary stasis in the drosophlia spermtail protein [sup.2]2 tubulin. (Environmental Poster Session 10:00 AM-11:00 AM)
Some one-celled organisms are equipped with appendages like cilia and flagella that propel them through solutions.
A microscopic movable feat: innovations in both microscope technology and cellular physiology are showing scientists what does and does not happen in the front-running part of a moving cell
Existence of a braking point in cilia and flagella. J.
Transdifferentiation of larval flagellated cells to choanocytes in the metamorphosis of the demosponge Haliclona permollis
Encyclopedia browser ?
Full browser ?
CITE
Site: Follow: Share:
Open / Close