a device for measuring clear-ances—for example, to measure the clearances of structures along railroad lines and in mines to measure distances between skips and the walls of the shaft. A clearance gauge of the type used to measure such distances in mines is shown in Figure 1. 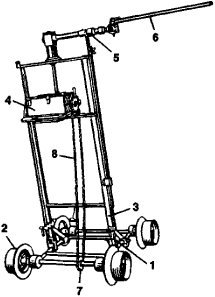 The four-wheeled bogie (1) whose wheels (2) are held against the rails by springs, carries a frame (3). On the frame are mounted a recorder (4) and a telescopic arm (5), on which a lever (6) is hinged; the lever is connected to the pen of the recorder by a system of gears, shafts, and levers. A sprocket (7) is mounted on one axle of the bogie and connected by a chain (8) to the recorder’s paper-advance mechanism. As the clearance gauge moves along the rails, the paper in the recorder is advanced by the chain drive in proportion to the distance traveled, and the pen deviates from the center line in proportion to the angle to which the lever is tilted if the distance to the wall or timbering is less than the acceptable minimum. Thus, when these distances are within acceptable limits, a straight line is traced on the paper. Where clearance is limited, the lever is tilted and the recording pen traces a curve, whose ordinates are in scale with the decrease in the distances being checked.

Feedback
Flashcards & Bookmarks ?
Please log in or register to use Flashcards and Bookmarks. You can also log in with
Flashcards ?
My bookmarks ?
+ Add current page to bookmarks
Mentioned in ?
References in periodicals archive ?
Shakerley said: "Packaging the new technology, including AC traction, dynamic brake and air-conditioned cabs, into a locomotive compliant with UK clearance gauge and axle weight [standards] has been a challenge but the design team has been uncompromising with a delivery date towards the end of 2009."
Freightliner orders 30 GE PowerHaul diesels: rail firm's largest order is for 7% more fuel-efficient locomotive
After the plates have been installed, a clearance gauge checks the assembly for build clearance, rejects any assemblies that do not fall within the clearance range, and chooses the correct model of retaining ring for the assemblies that do fall within the range.
A flexible clutch assembly line